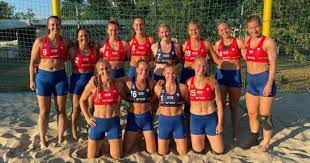 The women’s handball team of Norway has been fined for wearing elastic shorts and not bikini bottoms. They were fined during a game in the Euro 2021 tournament.

During the tournament, the Norwegian team wore elastic shorts in the bronze medal match with Spain in Bulgaria last Sunday. They wore this to show their protest against the rule to wear bikinis in the game. They want women to be allowed to wear what makes them feel comfortable while playing.

The Norwegian women team is facing fine because they want to wear shorts instead of bikini bottoms. There are International rules of beach handball that these bottoms should not cover more than 10 cm on both sides.

European Handball Federation (EHF) fined $1,768 from each player. The reason was given by EHF that the women's team wore inappropriate attire.

This hefty fine charged for not wearing bikinis which makes them uncomfortable is sexist in many people’s opinion. The attire of the women's team is being compared to the men’s team who are allowed to wear shorts that are 4 inches above knees.

Though Pink came in support of the team along with many others. Pink offered to pay the fine on behalf of the Norway team who refused to play in bikini bottoms.

This move is sexist as forcing someone to wear something which doesn’t make them confident in their skin is sexist. Cloth policing of women is a widespread phenomenon that is disturbing. Women are controlled from their clothes choice to their decisions for their life.

This recent incident is of proof how women are objectified and sexualized and have no right to fight for their comfort. The question is when male teams are allowed to wear shorts then why not women?

Every day women have to go through clothes policing at their homes or their workplace. While roads have enough witnesses who sexualize women. Now dress codes at the workplace are either to sexualize women or to cloth police them. In either case, it’s malicious for the women who go through it.

The clothing choice of women which is her choice depends on the male gaze. Women have no control over their clothing; all they have to run is for what kind of male gaze will it attract.

To protect women from the male contemplation we don’t intend to change the mentality of men rather we choose to control women. Why is it so? Have we all decided that men folk can’t change? We often hear “not all men” yeah, right but women are suspicious of all men. Like how will she identify in the crowd who belongs to the “not all men” category?

Fitting into tight skirts and turning to hair updo is like stealing the freedom of women in the corporates. This is just like how female players of beach handball teams have to go through the rule of wearing bikini bottoms.

Both men and women have to wear suits while working in the corporate world. But with women, high heels also add up. When a woman wears a flat they are frowned upon. High heels are associated with confidence and sleekness but the point is how can a person be confident when they feel that they are caged up in heels. Confidence automatically comes when you are comfortable in your body and skin.

The #KuToo movement was started by Yumi Ishikawa who is an actor and a freelance writer. When in 2020 Japan airlines down the rule of compulsion to wear skirts and heels, it was regarded as a big win for the #KuToo movement.

The #KuToo movement was an online campaign. Women have to always fight for gaining equality. In this era when we all are talking about comfort why it doesn’t count in terms of women's choices of clothes.

It’s high time we need to think about how we can make all genders feel equal literally and not just in our Instagram stories.