Compassion Fatigue: The Relationship between Digital Conflict and Compassion 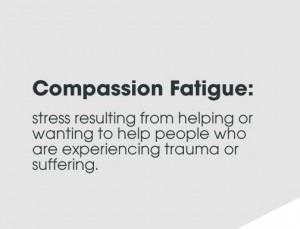 Is there a limit to our emotional capacity when it comes to conflict?

While living in a digital world where social media is considered the main source for news dissemination, it has become extremely challenging to not get influenced by negative events. Hence, people resort to ‘social media detox’. They find in their decision to live without social media for at least 30 days, a way to rebound with their inner selves and ‘virtually’ flee cruel war scenes.

Sponsored or not, we are very likely to come across online news platforms that feed us with war news without our consent.  It is, thus, inevitable to escape conflict scenes by being digitally active all day long.

During the last weeks, people have been expressing their exhaustion over the beginning of the new Ukrainian- Russian war especially that the world is still recovering from the pandemic. Surrounded by the plethora of information, there is only so much people around the world can take. It is only a matter of time before the human being kind begins to co-exist with such ongoing atrocities.

The very same platforms used to disseminate information about casualties and political conflicts are also used to express users’ frustration with war cruelty. Pictures and videos of soldiers and people feeling their homes have sparked wide reactions of anger and empathy.

This recent conflict has awakened memories of the wars that have been going on for decades but have not got the same media coverage. Does such inequality in media coverage be a case of compassion fatigue?

As compassion fatigue can be interpreted as the acceptance and disconnect from war afflictions on the news.  We have perhaps accepted and disconnected from the wars and conflict still happening in Somalia, Palestine, Yemen, and Syria among other different regions around the globe.  Therefore, media coverage has become very limited even though we know the wars are still happening.

The start of a new war is likely to have triggered the feelings of compassion and shock over endless suffering.

Becoming aware of a crisis means that we begin to feel compassion over what is happening and might begin to wonder how to help.   We look for ways to help by raising money, donating, and raising awareness.  Today we also show compassion by sharing pictures and videos of the distant crises. However, why do we eventually stop looking for ways to help even when the conflict is still going on?

Examples of research focusing on charitable donations have found that donations increase when we see graphic reports of human suffering.  The images of Rwandans during the cholera epidemic were linked to the outpouring of compassion from around the world calling to donate money to Oxfam.  Donating money to organizations to help support those facing the cruelty of war is perhaps a way of showing our compassion.

Nevertheless, the same research has found that images involving death do not appeal as much to our compassionate side.  This has also been linked to the denial of responsibility over the killing and the acceptance of human death.  It can be argued that this is also a cause of compassion fatigue.

Even in the case of the Ukrainian war, we can already see that we are entering in a state of fatigue as posts and media coverage have begun to decline.  The feelings some of us experience when it comes to the visual images of war were also apparent when wars in other countries began.

In the beginning of the war in Ukraine, entertainment accounts started sharing pictures of the conflict but a few weeks later they have moved back to sharing their usual content.  While this gradual reduction of circulating images and the almost unavoidable progress of our empathetic feelings begins, the distance of our safe proximity to conflict also begins to grow.

Often, we find ourselves being aware and acknowledging what happens around the world but at the same time trying to remain disengaged due to the despair surrounding certain events.  The compassion fatigue followed by feelings of discouragement about how much we can influence what happens around the world can make us question whether there is a limit to our emotional capacity when it comes to the spectatorship of suffering.