Condition of Sanitation Workers in India 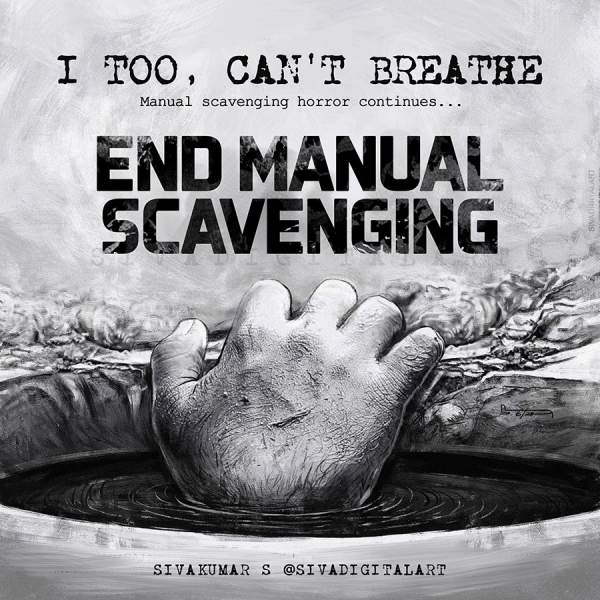 Highlighting the recent happenings across the globe, during the pandemic, "quarantine", "self-isolation", "social distancing" have become the newest developed part of our vocabulary and a way of lifestyle. For the scavenger community, these are not new terms. It has been their way of everyday life that is forced upon without choice.

People of this community have always had to live on the outskirts of cities, live in isolation- away from socializing and into the shadows. India is seen as a diverse and multicultural nation but there are issues of racism and discrimination, that haven’t ceased and won't.

The government of India enforced sanitation workers to continue working amid the pandemic and even spend extra hours. This topped up the risks these workers were already facing. Sanitation workers are not provided with protective gear in our country. Manual scavengers face the risk of death each morning they go out of their homes and enter the death-holes. A study reported that 1 in 5 manual scavengers die every day in India. There's always been a mystery around the real data and news regarding scavenging jobs because it literally is clear exploitation. There are more death rates than what the government showcases. There are contractors in the country who take in scavengers for jobs.

I had a conversation with Vimal Kumar- founder of Movement for Scavenger Community(MSC) to get a deeper idea of the real scenario. "There are several jobs the scavenger community is performing in the pandemic. Door-to-door garbage collecting, manual scavenging, dry washrooms, and public restroom cleaning are some daily chores. And the pandemic has witnessed so many deaths, the scavenger community is given the task to cremate these dead bodies. This job is a dangerous threat to the person and his family members because of the risk of infection", says Vimal.

Sanitation workers in India come from a specific caste. India is racist and discriminates between caste- a huge social issue that never ceases. Mostly, these people belong to the Valmiki community from the Dalit caste. As far as it goes, sanitation work was assigned to these people without choice. There's no other person considered for this job.

Vimal shares a horrific incident that happened with a close person to him, "A close person to me worked at a hospital as a sanitation worker. Every sanitation worker was strictly ordered by the government to not leave the hospital premises at any time. They were supposed to stay at the hospital. And as there is no wonder in it but he was not provided proper food and bedding. He had to sleep on the floor at times. And after a few days, he passed away".

A boy of age 8 was assigned to clean toilets of a covid centre in Buldhana, Amravati, Maharashtra. This violated child labor law and also was a health threat to the boy. The video went viral and received attention across the country. Only after much media attention, actions were taken. There are so many such cases that the country is not aware of.

The government has always been a two-faced party. During the Swachh Bharat program, several toilets were built across the country. The detail that was left out of notice was that these toilets need periodical emptying and treatment of the faecal matter on offsite areas. This worsened the situation for sanitation workers. Numerous toilets built up in rural regions of the country are not connected to the functional sewage system. This cripples the whole initiative of making toilets in the first place. India needs sewage systems more than four-walled toilets. To this Vimal added, "People in the rural regions do not even know how to use toilets. It is still an alien concept and some places do not even have the facility.”

Manual scavenging was first banned in India in the year 1993. Then in 2013, the Prohibition of Employment as Manual Scavenger and Rehabilitation Act replaced the legislation of 1993. And in 2014, manual scavenging violated international human rights commitments. The government brings in reforms, acts, policies, etc but not any of these policies make any difference in reality. Only 20% of the scavenger community are aware that manual scavenging is prohibited.

Vimal Kumar gives his thoughts behind this saying, "Have you ever seen any advertisements regarding manual scavenging on television? or any other platforms- radio, paper? This topic doesn't come up because it is considered shameful for the country. I was recently staying in a hotel and I noticed that the manager called scavengers to clean the septic tank of the hotel. I asked the manager, does he know that this could put him behind the bars and this practice is banned? He knew none of it."

After years of darkness in job opportunities and social life, people of the scavenger community have grown resentful towards change. Vimal shares, "Even when they are told that scavenging is against law, they do not give up their work. They believe that they won't get any other job and can't run their homes and provide bread to the family. There's no hope in their eyes and the lack of awareness is one of the reasons." Well, the other is the discrimination they experience in society.

Sanitation workers face injuries and deaths along with violence and discrimination. The holes of sewage channels have a lot of trash like glass bits, plastics, needles, blades, and on top of that the walls of the hole are made of granite which is a very rough material. Since protective gears are not provided, their hands and legs get cuts and scratches.

The septic tanks have toxic poisonous gases like ammonia, sulphur dioxide, and carbon monoxide. This creates a risk that the person entering the tank may get unconscious inside or get chronic diseases. When the person enters manholes or sewers, generally they get into it to remove any kind of blockage. As soon as the blockage is dislodged, the sewer starts filling up immediately. If the person fails to get out in time, he may drown and die. There are machines available to clean sewage tanks but yet again these machines are not much used. India's a developing country and most of the rural areas do not even have proper sewage systems.

To solve such exploitation and take a step to improve this situation of sanitation workers, the country needs more people like Vimal Kumar. Vimal shares challenges he faces every day with his work saying, "Making changes is not easy in a country with such rigid minds. Our NGO has set up a few community centers. One of these community centers was recently transformed into a political party office. It is sad to see this type of situation and this is just one of them that I am sharing, there are so many more."

When a group is moving in the direction of change, they are pushed back even more. Maybe such conditions are the reason behind the crippled confidence and hope of sanitation workers. We don't need more policies or laws, we need major awareness and real change. Sanitation workers are not the taboos, casteism and racism are.

Vimal Kumar is a Next Generation Leader, at The McCain Institute - USA, founder, democratizing Leadership Initiative (DLI) USA, and the founder of Movement for Scavenger Community (MSC), an organization committed to the eradication of manual scavenging in India and bringing education and awareness to the existing scavenger community.

As one of the rare members of the scavenger community who was able to obtain higher education, Kumar provides the unique perspective needed to provide insight into the issues caused by India’s caste system. He seeks to eradicate caste violence and prejudice attitudes towards the scavenger community through the establishment of leadership education centers. Kumar is committed to building the leadership movement among grassroots organizations and activists around the world. He did his Masters in Social Work and also completing his Ph.D. in social work. And is also serving in the advisory board of the Journal of Modern Slavery, USA.

Go on the link to know more about his organization - https://scavenger-movement.org/