Daughters or Dowry? It's your choice... 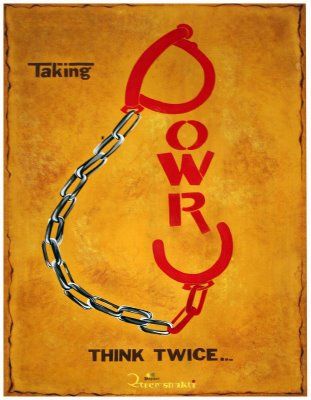 Ayesha Bhanu,24, a resident of Ahmedabad, on February 25, 2019, jumped into the Sabarmati river and ended her life due to the harassment she was facing for dowry from her husband. If we carry out a casual search on the internet we’ll come across such countless horrifying cases. National Crime Bureau of India, as recently as 2019, recorded nearly 7100 dowry-linked deaths. Though dowry was made illegal decades ago, it is still a threatening reality!

Why does our society tend to value a woman’s life around the amount of gold she brings in dowry? Although our constitution grants equal rights and opportunities to women but has our patriarchal society stopped seeing them as more than a personal-priced possession? In rather simple words, the infamous dowry system has been dehumanizing females by treating them as exchangeable commodities. From being a financial burden to a symbol of masculine power, this evil is silently claiming the lives of innocent women.

Taking or giving dowry has been criminalized after the enactment of the Dowry Prohibition Act on May 1, 1961. However, still, it remains a significant part of Indian marriage which is openly defying laws and failing women empowerment. The tradition of dowry persists not only in rural areas but in metropolitan cities too among the educated class which is quite shocking!

The system of giving dowry or ‘dahej’ in marriage is an ancient Indian custom. The parents of the bride in the past indulged in the practice of giving money and gifts at her wedding to the groom and his family as a token of love and respect. Shamefully, today, it is something that is demanded and has developed into a full-fledged bargaining business today. It is a menace now and invites all sorts of criminal activities.

The prevalence of patriarchy is the major cause of dowry in India. Despite being in the race of becoming a modern and developed country, boys have a rate card in many societies in India. The worth of the boy is measured by the amount of dowry a boy will get upon marriage. Secondly, the dowry system is too deeply rooted in Indian culture that it is seen as obligatory and unchangeable. And people are very ignorant towards changing the traditions. Thirdly, a woman’s marriage is of paramount importance in Indian families. Family members are ready to give dowry in return for a secured life for their daughter.

But, why is it that always bride parents have to give dowry, why not the groom family? Marriage is a significant and sacred event and our society puts an economic value on it. Dowry System encourages female foeticide due to gender inequality and most families can’t afford wedding expenses. Why are Indian women oppressed and unfree even after more than seven decades of independence?

According to the National Crime Records Bureau, dowry deaths account for 40-50% of all female homicides annually in the country. This is simply unacceptable. The need of the hour is to address the basic problem of enhancing women’s place in society and succumbing to patriarchy.

Educating women is the foremost important step towards bringing a change. It will make women independent financially and boost their self-esteem. A well-educated girl is also able to make their own decision and confidently say ‘no’ to greedy grooms and take a stand for themselves. Grooms need to step up and ‘say no to dowry’. Although the dowry prohibition act is already present in the country, it is not enforced strictly. Youngsters can volunteer and spread awareness on how the dowry system is a menace and is rotting the country. Media also plays a proactive role in spreading awareness. There needs to be simplicity in marriages. Women must have legal knowledge so that they can step up and fight.

Parents must be alert of any suspicious injury or bruises of their daughters after their marriage. They must pay serious attention if they see any sign of depressive behavior in their daughter’s personality.

In pop culture, the film 2 states establish the righteousness of the female lead in a short sequence. However, it was short-lived. The issue is explored more deftly in Made in Heaven, titled Price of Love, the episode shows how dowry is practiced across class, with the bride walking out of the wedding venue after the groom’s family demanded a huge sum in dowry.

Dowry System is a social stigma which is in existence since time immemorial. Only our conscience and awareness can remove this evil.

As Mahatma Gandhi has rightly said, “Any young man, who makes dowry a condition to marriage, discredits his education and his country and dishonors womanhood.”

If you are reading this article, share it widely so we can push for conversations that question this and helps us all change the system.