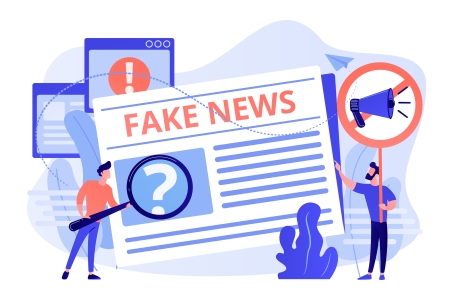 Gone are the days when people used to hoard around the community TV to catch the state-run headlines of the day and owned miniature radios as a constant companion for getting briefed. With the rise of the new internet age, an unprecedented information explosion has taken place, leading to modern-day crisis like cyber bullying, data privacy breach and the most talked of the all- Fake News.

Athough “With great power comes great responsibility”, but we have witnessed time and again, how these very accounts have ignited the wildfire of misinformation i.e.,fake news. Often leading to mass agitation and taking even the worst forms of hate crimes like mob lynching and murders.

The ubiquitous culture of fake news first came into existence when internet usage in our country saw a steep rise after the episode of free Jio sims distribution. In June 2016, India as a country was reportedly using 2000 million GB of data per month by March 2017 the figure had increased six and a half times 42 1.3 billion GB and specially in today’s scenario with the raging pandemic in backdrop, people have become more dependent on online news sources over the traditional mainstream media. This is pretty evident from the fact that the profits of mobile networking companies like Airtel and jio have skyrocketed this year.

With the onset of this Coronavirus pandemic, a tsunami of misinformation rolled over the internet claiming spurious cures, just feeding on the fear of panicked people. Major social platforms like Facebook ,WhatsApp and Twitter came under fire for being rife with these conspiracy theories .The WHO even responded to this by warning people that “We are not fighting in epidemic. We are fighting and infodemic.” Fallacies like consuming Chloroquine and silver constituting products as a cure not only stuffed the pockets of the opportunists but also lead to many innocent deaths. At some point, even the mainstream media did not exempt from spreading fake news.

This was actually the pinnacle of the fake news propaganda. Facing backlash from the people, the CEOs of these social media platforms pledged to eradicate this problem. On the other hand, many fact-checking sites like Alt news and Fact checker rose to an unprecedented position for gatekeeping the influx of news. Despite all these measures, it is still pretty natural to come across concerned remarks like “Whom should I trust?” every now and then.

Image by vectorjuice by Freepik.com