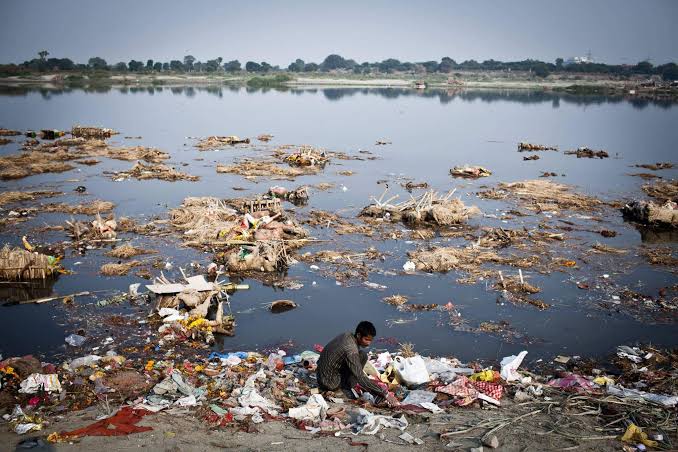 Last night, I had a dream. I woke up and I was frightened. Plastic Bottles Swimming in the river with no trace of fishes, the water is kind of brown with all the garbage floating on the surface, bees flying all around, humans and animals dying without water and yeah, that strange smell what my nose can't bear at all and won't let me breathe. Imagine if this is real. This dream helped me realise that no matter how much we tend to overlook things, it will not change the fact that something is bound to happen. The same can be said for the Yamuna river. Deep down, we don't want to believe it, but the truth is that the Yamuna is about to die. It is unbelievable to see this in a country like India where rivers are believed as our goddesses of water and Earth as our mother. We are aware of the fact that rivers are one of the major sources of drinking water because we cannot drink water from oceans and seas. Rivers like the Yamuna have been nourishing us with water for centuries, and look what we have given them in return. Is this how we treat our mothers or goddesses? We have to think about it deeply.
Introduction
Places having rivers nearby are said to be more developed than others, as rivers play an important role in the development of a region. Water is necessary for all major developmental work and even human civilization came from rivers.
The Yamuna has flown through Delhi for thousands of years and now it has become a mainstay for Delhi. The fact that we never gave attention seriously is that the Yamuna is the most polluted river in our country. It has been in a derelict state for a decade or more and with time, is getting worse and worse. We have always been told that the colour of water in the Yamuna River is blue but I bet nobody in this era would see it as blue. The increase in population and rapid industrialization has made it so polluted that it no longer looks blue.
How much is the Yamuna's stretch in Delhi?
The report says that the Yamuna River flows for 54 km from Palla to Badarpur through Delhi and there is only a 22 km long stretch that passes from Delhi between Wazirabad and Okhla. However, the total length of the river in km is 1,370km starting from Yamunotri to Allahabad. If we see this according to percentage then it is only 2% of the stretch in Delhi from the total. Do you know the actual contribution of Delhi to Yamuna pollution? The smallest stretch accounts for the largest pollution rate. The only 2% stretch in Delhi holds about 76% of the total pollution. It signifies that Delhi is contributing the most to Yamuna River Pollution. 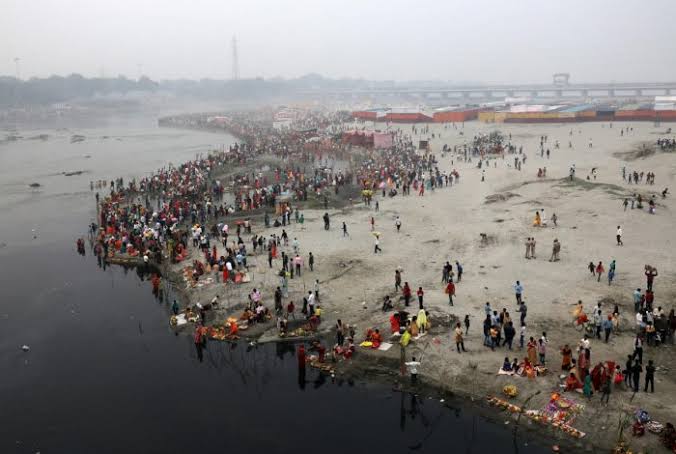 Delhi's Sewage waste production: A major cause
Sewage discharge from Delhi is a major reason for Yamuna's pollution. Waste from industries, factories, industrial effluents, and also all those gutter pipes are also opened in the rivers. Do you know how much waste Delhi produces? It is 327 crore liters of sewage waste daily. If we talk about sewage treatment plants, then the capacity is limited to 276 crores which is far less than the total waste produced. It simply means that the remaining 52 crore liters enter into Yamuna River. We can now imagine how dangerous it is. Can you imagine a healthy life with this condition? I cannot. It feels dystopian, strange.
Other major causes for pollution in the Yamuna
Apart from sewage produced by Delhi, there are more factors responsible. One of them is the use of fertilizers on agricultural land in the Yamuna basin. The use of fertilizers leads to an increase in the amount of ammonia and thus reduces the oxygen content of water. Since Haryana state uses more pesticides, they are the biggest contributors after Delhi in polluting the Yamuna river. Also, landslides in the rainy season lead to pollution as the soil and waste on land enter the river. The nearby area of the Yamuna river in Delhi is highly urbanized and is connected to various drains. Shahdara drain is the major drain and a huge amount of polluted waste is discharged into the river. According to the data given by CPCB, the water from the Yamuna river contains heavy metals in a large amount.
Another major cause is our traditional festive practices such as immersion of statues of gods into rivers. The paint which is used to decorate the statues is cheap chrome paint, and it also causes pollution.
Less effective departments: Problem of Delhi
The government has made various departments control the pollution in the Yamuna river. National Green Tribunal(NGT), Central Pollution Control Board(CPCB), Delhi Jal Board, Delhi Pollution Control Committee, Upper river Yamuna Board, Municipal Corporations Of Delhi, and some more.
CPCB is responsible for monitoring the quality of water and NGT provides solutions for the conservation of rivers. The Delhi Jal Board is responsible for the regulation of sewage treatment plants.
These departments are working but not efficiently and the reason behind their inefficiency is found to be the lack of coordination. This has somewhat become a political issue as political parties are involved in it. The reason for the lack of coordination is the tussle between two opposing parties NDA and AAP. Delhi's ruling party is AAP but the Central Government is ruled by NDA and all the authorities come under the Central Government except for the Delhi Jal Board. This has resulted in delays in projects. Everything is just going on a formality basis, and as a result, Yamuna is dying.
The best example of this is the Yamuna River Project. This project was an initiative by DJB and the University of Virginia and its goal was to rejuvenate the Yamuna river. But there has not been any significant progress till now and the reason is a division of departments and lack of coordination. As the saying goes "Unity is strength", so if the authorities will work together then we can achieve our aim to clean the Yamuna. Impacts of river pollution
The untreated polluted water of the river can develop toxins and harmful bacterias that can easily enter our food chain hence those toxins can also be present in the fruits and vegetables we eat daily. These toxins are very harmful and can cause damage to various internal organs including the kidney, heart, brain, and lungs.
Also, polluted water can lead to the spreading of various water-borne diseases such as Malaria.
Delhi produces a huge amount of plastic every year and not even half of it gets recycled. Most of the plastic is collected near shores and hence animals like cows and dogs die because of mistakenly eating them.
There is a huge impact on aquatic animals as they can’t survive in such a polluted environment. So in short the whole ecological system is affected by pollution in rivers.
Some suggestions and Conclusion
We have to accept the reality and should start working on it. The Yamuna is in a bad state and nobody, but humans are responsible for it. Various projects and movements are already in work but still, it feels as if there is a need for hard work.
1) The government should not only reduce corruption but would also elevate development projects.
2) There is a lack of cohesiveness between the authorities. The authorities should dedicatedly perform their tasks ignoring the political relationship.
3) Strict laws can be made for the industries, factories, and hospitals that are directly discharging their sewage waste into rivers.
4)The decision-making process should need to be more effective and quick and should include public participation.
5) More projects like YRP need to be approved to increase the process of Yamuna cleaning.
6) Public awareness regarding building more toilets and using them is much needed.
7) More sewage treatment plants are required and the upgrading of older ones is necessary.
8) As individuals we also have our responsibilities. We should use home toilets and should not discharge our waste directly into rivers. Also, traditional practices like the immersion of statues and other such things can be stopped as life is more important than rituals.
If we succeed in our goal to clean the Yamuna, then it will have a very positive impact on us. It is our due responsibility to save our river but the government itself cannot do everything, so we have to come together and achieve success.
Share This Post On