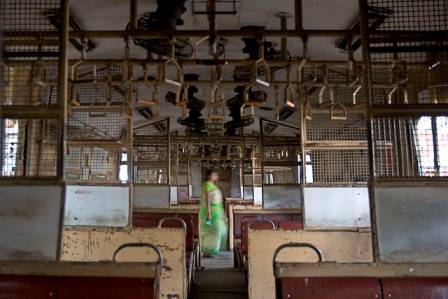 On the unoccupied seat beside the window, a white handkerchief sat poised. Commuters pushed their way through the compartment's doors and scattered quickly. No one inquired about the handkerchief, nor did anyone attempt to remove it and occupy the seat. As the empty compartment filled up with almost all seats occupied, the train started leaving the station. The handkerchief sat dignified beside a woman thumbing through a catalogue of cosmetics. A gaggle of women sat near the doors even though a few seats were still waiting for a fourth person. A woman running on the platform sped up to position herself near the moving door. Women seated near the door grab her hand as she jumps on the floorboard. With a victorious chuckle, she moves towards the seat with the handkerchief. The woman looks up from the magazine and smiles. The handkerchief is taken over. Hawkers with mouth fresheners, fruit, and jewellery, took their positions as the train gathered speed. The chatter slowly swelled, the sun flooded the compartment, and the curtains rose on the daily theatre of camaraderie, scuffle, and business, like clockwork.

This is a familiar scene for anyone who has been a daily commuter by rail in India. The scene adjusts a little with every district and with every state. I travelled via the Sealdah mainline for almost seven years. The etiquettes and norms of a Sealdah mainline differed from a southern-bound train from Sealdah. When I travelled to Mumbai, it changed again, and it took me at least a week to understand the basic rules of thumb. But what enthralled me the most was my experience in the “Ladies compartment” of Indian local trains. Women ran small businesses, cooked food for each other, counselled each other on personal matters, networked for work, played silly games, and quarrelled with rowdy robustness. The IT professional was friends with the nurse, and the teacher was friends with the young entrepreneur. They had their designated seats. The longer you have been commuting on that particular train, the more permanent your seat is. Best friends with handkerchieves made sure you did not miss out on your premium seat. But there are hierarchies.

The women who sat near the door were almost always from the menial job sector. These compartments are not a magical alternative. It was still a casteist, classist and sexist space, but with an alternate scope of domesticity. Where women could sit and discuss matters personal and public. I remember arguing with an older lady who had qualms about my “masculine” hair and garbs. From two, the argument swelled into a discussion about gender and performativity between six people from, what I could collect, very different walks of life. But within the differences, there is solidarity, a unified sense of belonging in being born as a non-cis-man. Transwomen, eunuchs, cis-women all find their way into the ladies’ compartment, albeit wrought with complications. More than a dozen times, I have witnessed a man being brutally thrown out of a compartment.

Ladies' compartments first appeared in the 1930s, with the Deccan Herald being the first to do so. The Western Railways then launched the first Ladies' Special Train in 1992 to make it easier for working women to commute. It has been argued repeatedly over the world that this solution is defeatist and retrograde. In 2016, Germany added a passenger car for women, reigniting the topic. In public transportation, a gender-specific compartment does reinforce gender identity and roles, resulting in segregation. But these public transports are an extension of any average public space, wherein a non-cis-man navigates with heightened defences. Any average Indian woman or non-cishet man can vouch for at least one incident of sexual assault, groping, or teasing in public transport. Being a daily commuter in both Kolkata and Delhi (metro), I can confirm that the assurance of a ladies compartment is a calm stop-gap as I make my way through public and personal spaces crowded with men. It's difficult to have your guard up 24 hours a day, seven days a week. The short hours of safety within the moving walls of a ladies compartment may not be perfect, but it is an essential step forward in gender equality. Although many women choose to travel in a general compartment, the option of a ladies' bogie is still required in our society.

The ladies' compartments became my home as I made my trip to college/work and back. A place where people sat comfortably, argued and laughed loudly, cooked for one another, and exchanged gifts. Unspoken bonds were formed, and implied expectations were developed; A domestic cooperative of women within the moving walls of the Indian railway. Still a part of the heteronormative structure, still casteist - yet a safe harbour between public and personal spaces of vulnerabilities.