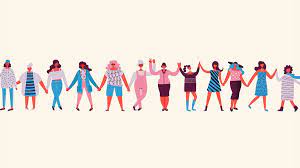 “Oh! She is a feminist, surely a man-hater.” This is a common statement we all hear when we talk about feminists. This isn’t true. Feminists aren’t man-hater, misandrists are man-hater. Bewilderment should be your reaction when you hear that feminists hate men. The simple motive of feminists is equality and fundamental rights for women.

Countless times we all have encountered people who confuse feminism with misandry or man-hating. It’s painful to see people counting misandry as feminism. Feminism originated to free women from the shackles of the patriarchy. Feminism is misinterpreted and feminism faces the agony of people.

It’s unfortunate that people think of misandry as feminism. The reason for this misinterpretation is that feminism challenges gender inequality. As it challenges the long-existing gender norms the people benefitting from it are reluctant to support it.

Man bashing can’t be justified as feminism it’s misandry and nothing else. The true essence of feminism is getting lost these days. People are using it as a buzzword and to justify their personal hate for men. We are losing the essence in retweets, shares, trolling, and in the act of looking cool on the internet. This era whose right hand is the internet is actually filled with pseudo feminists or misandrists.

Feminism is defined as the revolt to gain equality among men and women. Feminism has three waves. The first wave dealt with women getting the right to vote. The second wave was about the liberation of women from societal discrimination. Third-wave was a backlash against the second wave. Third-wave talked about women from every background and not just white women and straight ones.

Thus in these all waves it has always been about women getting equal rights and not demeaning men.

“I was just 15 years old and couldn’t find the out of the lanes of Chandani Chowk. I went to one lady and asked her way out. She accused me of harassing her. I couldn’t process it then but now I get it. I don’t blame her for her misandry. Women suffer quite a lot throughout, thus it’s common for her to not trust men, precisely to hate men.” said Journalist of Dainik Jagran, Mukul Sharma.

Mukul further shared his one more life experience, “I went for an interview and was rejected and a girl was selected. The company gave the reason that on the ground when women go she doesn’t suffer from police charges, while men are easily charged with various charges in-ground reporting.”

“So basically misandry is prejudice against men, their choices about almost everything from color to career, and the way their life is divided into some sort of timeline, where they have to cross milestones within a particular age bracket. Be it subduing their emotions. Be it choosing a creative field over-engineering, medical, or advocacy. Be it earning less than their female counterpart especially if that person is his wife, then their caliber, worth, and quote-unquote manliness is subjected. I have a friend who has been into cooking so he wanted to build his career as a chef, but even though a lot of chefs in our hotels are males yet when a boy comes up with such a dream, he is constantly pulled down owing to his gender, masculinity, and whatnot. He was put in a bad light and I know the kind of mess he went through to pursue a career that requires soft skills like cooking, even though cooking is a very basic skill. I don't get, how organized our notions become when it comes to sectioning career choices and gender. So when he chose an off-beat career for himself, there was a big question mark put upon by society.” said Kasha Mishra, a student of Delhi University.

Our definition of success changes when it comes to boys because where men are born breadwinners, a woman being career-oriented is still considered empowering and not a necessity. Misandry perpetuates the time our girls are made to believe that no matter what they pursue, how much they earn or doesn't matter if they own a house or not but yes their husbands should always have an upper hand when it comes to financial stats of the house. The males have to be heavyweights in the matter of money. This is how problematic and pressurizing misandry can get.

All of this boils down to patriarchy, where young boys and men continue to be stereotyped and unconsciously yet actively stereotype women.

There are many inside jokes of feminism like “to drink Male Tears” and “Killing all men”. No this isn’t funny. Feminism doesn’t hate men but these jokes are spreading the propaganda that they do. Of course, feminists don’t want to drink men’s tears. But these jokes aren’t funny.

If a feminist wore a t-shirt written misandrist, it is not funny. Just consider the vice versa scenario a man wearing a t-shirt with the caption misogynist, of course, you won’t like it. There are men who support feminism and are allies, and we want their contribution to equality among every gender.

“All men are trash is”, a commonly used statement, we all need to stop this. For the act of looking cool on the internet, you don’t need to pretend yourself a feminist and a men hater. Hating men and feminism can’t go hand side by side.

You can’t ignore the sacrifice of both men and women in building this world. If women have been subjected to sexualism, the males have been oppressed too. We need to respect every gender. Voice out your opinion, but be considerate too.

Feminism is about the injustice due to patriarchal society and it has nothing to do with the men-hating or misandry. There are lots of injustices in a society like marital rape, women educations are not given preference, for marriages girls parents have tp give dowry and many more. Feminism is to eradicate these injustices.

In this era of the internet be a feminist who believes in equality and not just likes and shares. Don’t bash any gender for mere likes. In the end, feminism is about equality and not proving someone superior to the other.

An San and Sexism in South Korea