Ecstatic and Unfazed - Lives of the Faces we Overlook 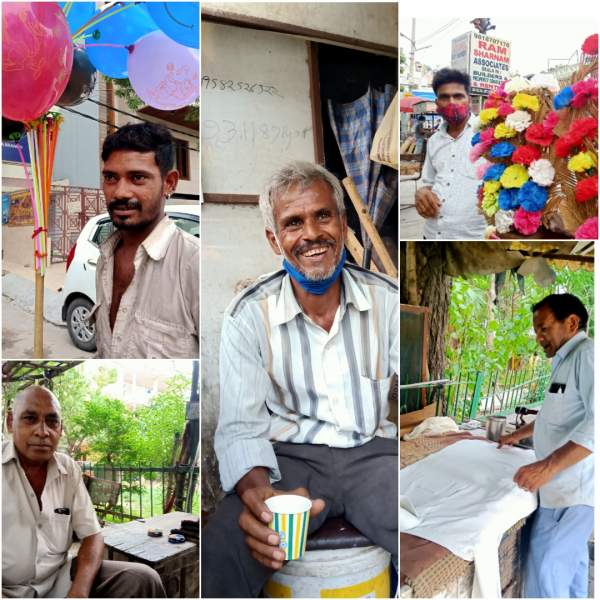 As evening sets in some nook of Delhi a tea stall owned by Kishan brews tea with ginger and Elaichi (cardamon), the must-have condiments for Indian Masala Chai. Kishan has been brewing tea in the same locality for the past five years. He owns a small cylinder connected to stove gas burning almost the whole day from 6 a.m. to 7 p.m. The humidity was sweltering and sweat settled over the chaiwallah’s brow which hardly hindered his spirits. Visitors would usually accommodate themselves over a wooden Baksa (box resembling a metal trunk). Upon asking if he loves his job he shook his head with joy and said it’s bliss in winters but these days it's a bit difficult standing in front of the boiling cauldron of his livelihood. I asked him if fears competition from the chaiwallah across the street he smiled and said I don’t fear anything, there’s always a source of income welcoming me and I am open to work and do hardships. “Work never leaves one with an empty stomach” he added.

As I moved ahead after the tea session, I came across a shelter set up by a press wallah. Earlier that week when i crossed it , it was abandoned and i clicked a picture assuming he was out of town. But to my surprise i saw a man in his middle age iroing white shirts. I asked if he has been coming their daily he happily replied, "yes yes everyday! Look there i even own a bike". I showed him the picture of his abandoned shelter clicked by me the other day and the captured him working. He exclaimed that its pretty and he loves talking but people hardly have time these days. I asked if Covid was hard on him he answered, "Hard days come and go and i'm very happy to back here. God is with me, i never suffered."

Just ahead of it I found a slab decorated with faint plastic flowers. A man in a formal shirt sat behind it petting a white street dog who seems to love his company. He stood up to greet me and introduced himself. His name was Santosh and he was a florist. He explained that these days weather is so humid that he resorted to present plastic designs of floral bouquets. He excitedly showed me, Marigold Malas, Roses, and Rajinigandha then expressed how covid impacted his occupation. People hardly care to contact florists for decoration even during marriages these days. "Since past years Teachers’ day and students farewell also didn't see students flocking, thank god kids still care for their parents on Mothers’ day and Fathers’ day, a lot of people contacted me", he says. Valentines’ day is a year later and he sits in hope that amidst fuel hikes and the rising price of flowers from Himachal Pradesh his livelihood would sustain. “ The people around me, the policemen, the rent charger, and everyone has been very considerate of our situation. I have never come across someone violating me”, he added with hopeful glitter in his eyes while I took his leave.

I spotted Shankar standing across the road while talking to the florist. He stood still in the middle of a busy road in hope of sharing the joy of vibrance he held with him - big bright balloons. He had managed to get a child’s pram in rusted condition and fixed a wooden rod to its corner with several balloons aiming to contrast everything mundane around. Shankar hails from Rajasthan and is a migrant worker earlier he used to sell brooms on a cycle that needed great care so he resorted to selling balloons. He states he waits for the evening to arrive soon so that he could sell off the balloons as harsh sunlight would lead to the bursting of balloons. He was the happiest daily wager I have ever come across when I asked him if selling balloons helps him, he smiled shyly and said he has never been happier. All his balloons get sold by evening and that is enough to fill his stomach. He’s also saving some amount for his family in Rajasthan and plans to visit them soon.

Walking back home my slippers got worn and I had to sit by Ram uncle who has been mending my shoes and schoolbag zips since childhood. It's been years since I paid him any visit. He was sitting in the same setup and upon inquiring, he told me that he has been mending shoes in the same set-up for the past 35 years! While stitching my footwear with precision he narrates how he has always prioritized literacy in his family. He had passed the 11th standard and is a proud father of two sons who have been students of Science stream, one employed at a Government healthcare facility and the younger one in 12th standard. Out of curiosity I ended up asking him why he’s still working, he says it's also his hobby and he doesn’t like idling at home. Then he asked if I am aware of Albert Einstein’s quote, “Necessity is the mother of invention” and how our life goes by it. I was not only surprised but purely amazed! With better living standards come greater expenses, he says. While he worked on my footwear I captured a photograph wondering what it's like to sit there the whole day. At that moment he mentioned he would love to own a mobile-like mine to use WhatsApp and send samples of his shoe designs to dealers. His ambitious outlook on life and will to flourish in his area of work inspired me the most.

All these faces we come across and pass by hardly give us a glimpse of their lives. We pity them and hardly recognize their labour with our incessant urge to bargain from their daily wage. According to the report of ILO (INTERNATIONAL LABOUR ORGANISATION), the informal wagers have experienced a fall in their wages by 22.6% in India during the Covid pandemic. India’s daily wage rate average is expected to be around 372.33 INR/Day by the end of 2021 according to Trading Economics global econometric models and analysts expectations.

Amidst all these hardships these individuals are not only hard workers but also ambitious, fearless, and in love with their occupations. Before taking leave, I asked everyone if the pandemic affected their spirits and made them question their source of livelihood, each one of them gave me the most relaxed and cheerful smile and denied my assumption. We hardly hold conversations with people who make our lives efficient and beautiful. Our socializing circles have narrowed to social media but if you go by my words every man is a story that would inspire you to live life - unfazed and ecstatic.