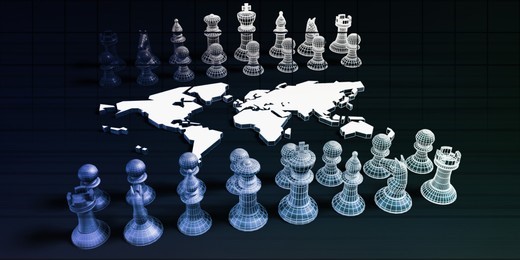 The war in Ukraine has definitively highlighted the need for Europe to make a transition that can bring "the Old Continent" to the rank of a stable and reliable geopolitical power. An event of this size can be traced back to the Second World War and, more recently, to the war in the Balkans, which began more than twenty years ago. Consequently, the Russian intervention was an imperialist threat to the democratic order and the European security system. Although in response to a dramatic event such as the advent of war, Europe has already proved its intention to unite the member countries under a common aim and specific direction.

The sanctions issued against the Kremlin and the export of arms to Ukraine to defend its territory from the Russian invasion prove what has been said. In 2019, in her inaugural speech, Ursula von der Leyen stated that she wanted to set up a “Geopolitical Commission”. Distrust of European institutions and the lack of unanimity concerning economic and geopolitical issues have forced the commission’s new president to embark on a path of “ideological and social reunification” within the EU. It is indicative that even during the COVID-19 pandemic, the EU countries tried to work together to end the emergency that arose.

In this respect, the Ukrainian crisis is a testing ground for European relations with the rest of the world. Diplomacy with Vladimir Putin has obviously been complicated by the significant dependence on energy that Europe has on Russia. For this reason and for the tenacity with which Vladimir Putin continues the invasion, Europe has already implemented programs to reduce this dependence. But if this node is a critical factor, it is easy to understand how the relations that regulate geopolitical concerns are increasing in this nature. In the twenty-first century, the threats we face increasingly consist of financial sanctions, import and export bans, and disinformation tactics.

Consequently, one of the pillars on which the EU is founded, namely security and defence, must be reinterpreted. It is no longer a question of deploying soldiers at the front but being prepared to move the competition to other levels. The EU must be able to make its own compelling narrative message. To bring its citizens together towards shared values and ideals, a goal that has not been pursued for too many years and whose effects have been devastating on a social level. A first step was taken with the drafting of the Strategic Compass. In this document, it is possible to note how the EU's effort is of a dual nature: to ensure proper military and security preparation and to intervene strategically against the threats of the new century.

It is clearly specified that spaces are created for other actors where there is no European regulatory presence. This is the case in some areas of Africa and the Middle East. As for Africa, the continent's economic and demographic growth shines the spotlight on European interest in future investments. But this picture is aggravated by the presence of terrorist groups, weak states, and poverty that do not help European intervention. Similarly, these characteristics are also observable in the Middle East. Furthermore, monitoring the non-proliferation situation of weapons stays crucial in this geographical area. We underline that in these countries, where there are many religious and social differences, the good intentions of peace and prosperity are threatened by the massive amount of regional and global actors who have interfered in the political, social, and economic dynamics.

Therefore, the EU must rely on regional alliances and beyond. As we have seen, many actors and interests at stake are an obstacle that the European continent cannot address alone, considering the dark years it has faced recently. In addition to bilateral alliances, the question of the EU-NATO relationship arises. As recently stated by the commission president, NATO stays at the centre of European defence. It is equally valid that the US has long been waiting for a tangible reaction from the European continent. The response of the EU must be prompt: create strategies based on the identity of the states that constitute it. In this way, a functioning system will also positively impact NATO. Because the mere reliance on the US superpower is no longer sustainable and is not accepted by Washington, pushing increasingly for a "progressive isolationism". An example of this sentiment was the withdrawal of troops from Afghanistan, an action that raised doubts and terrible consequences for the local population.

Another issue connecting us to the Afghan situation that the EU must deal with is migratory flows. In 2015, the Syrian crisis posed a problem with millions of migrants fleeing war-affected areas. At the time, the situation was not professionally managed but in the case of the Ukrainian emergency, Europe has shown that it has learned its lesson. There was an ideological union that eased the intervention of humanitarian aid and the organization of migrants, creating safe corridors to reach countries such as Italy, Germany, Poland, and the Netherlands, just to name a few. Also, in this case, the winning key is the ideological belonging to common values, ideals, and aims.

The EU cannot yet be defined as a well-established geopolitical power. The failures of recent decades still weigh too much on the shoulders of institutions and citizens. But the truth is that the twenty-first-century challenges require the EU to become one quickly. The historical conjunctures have accelerated this process. Now we are in a transitive phase in which the European leaders outline the guidelines on which to base a process of change: greater flexibility, timeliness, and effectiveness. The means to achieve these aims are the following: strengthening alliances and security measures against present threats and creating a narrative that unites member countries.

Soon, about the management of the Ukrainian crisis and some issues that we have addressed in this article, we will be able to understand Europe’s role in the global geopolitical chessboard.