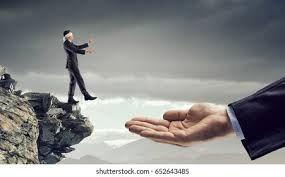 Faith must be enforced by reason; when faith becomes blind, it dies.  -Mahatma Gandhi

Faith is one of the biggest tools used to climb the ladder of success in almost any field. But there is a thin line that separates faith from blind faith. The line made of information and components that confirms your faith. As the father of the nation, Mahatma Gandhi, says, "Faith dies without reason, and so does progress and development." Blind faith is a set of beliefs and trust in a concept, person, or machinery. It is followed without any component or lack of information that can validate its logic. Why is blind faith dangerous? The answer is simple and yet very enigmatic. Blind faith puts a full stop to the scientific and cultural progress of an individual, community, or any nation. The biggest cause behind any system becoming stagnant and rigid is when its machinery is set to rigid working dynamics. Eventually, there is no space for recreation and questioning leads to the breakdown of the entire system. Almost 74 years ago from today, at midnight August 15, a dream was born breaking free of the chains of the British raj. Every Indian saw a dream of a land that Rabindranath wrote about in his poem, 'Where the mind is without fear.'

Where the clear stream of reason

has not lost its way into the

Where the mind is led forward

by thee into ever-widening

into that heaven of freedom.

Today we come a long way as a nation, we have touched the sky, and we have been under the water, into the deep oceans. We have left our mark in the fields, from aeronautics to medical science to vast and varying art and culture. We have made commendable progress. We not only have we learned and evolved, but we have also imparted parts of our wisdom and experience to the world. But what looms as a grey cloud over the head of the nation is the blind faith set within the people of India about so many aspects of life. It could be religious or societal. The education system in India has somewhat improved over time. The literacy rates have improved, but have they managed to reach the farthest corner of our well-diverse nation?

A survey was conducted in 2007 by the Institute for the Study of Secularism in Society and Culture of the Trinity College, with the help of the Centre for Enquiry (India) named Worldviews and opinions of scientists in India. According to the survey, out of 1100 scientists from 130 institutes, 24% admitted to believing that holy men can do miracles, and 38% of them believed that God could do miracles. The belief in faith healing was about 16%, in Vastu, the percentage was 14%, and 14% supported astrology. 69% of the scientists approved the introduction of astrology courses in universities. 67% of them agreed to take the blessing of Tirupathi Balaji before a rocket launch. Yet, most scientists agreed that developing a scientific temper, which is also a fundamental duty according to article 51(A) of the Constitution is not fulfilled.

Y.S. Rajan, a distinguished honorary professor in the Indian Space Research Organization, commented that most Indians don't feel a dichotomy between science and spirituality. Another survey titled 'Superstition at Workplace' carried out in 2012 by a staffing company called TeamLease. The survey covered about 800 companies in 8 cities, out of which 61% admitted having superstition. 51 % of them admitted to follow them in their workspace, among which 48% believed that these practices improved their productivity. It was found that the management did not object to these superstitions unless the employees' productivity was compromised.

These surveys talk about the educated society. The flag bearers of the progress and development of the nation, but what about the section of the society whose progress somehow has remained inert throughout generations due to several reasons; poverty and lack of education being the most crucial reasons. Superstitions aren't some illogical beliefs or set of rules anymore. It is a part of life for a large section of society, a coping mechanism to some. Above all, their thread to believing in something supernatural.

Modern-day gadgets and accessories have brought a revolution in technology, but rather than promoting critical thinking and message it was originally aimed to spread. The narrative has now shifted to more people-pleasing content. Many astrological shows and predictions are happening on TV than there are incidents to predict. The concept of offering a miraculous solution to problems of life is being promoted so easily through advertisements, shows, movies, and other mediums that there is little to eradicate the blind faith. It has taken over the brains and the hearts of the people.

As Jawahar Lal Nehru believed, the essence of scientific temper is 'the refusal to accept anything without testing and trial, the capacity to change previous conclusions in the face of new evidence and reliance on observed fact and not preconceived theory'. When we come across cases of a mother offering her 6-year-old son as a sacrifice to God or 11 members of the same family being killed as a part of some ritual aimed at attaining salvation or the witch hunts of women in village on the pretext of practicing black magic is the time you realize that blind faith doesn't differentiate between educated or uneducated. It stems out of your thought process. Proper education is one way to help the current situation in the country.