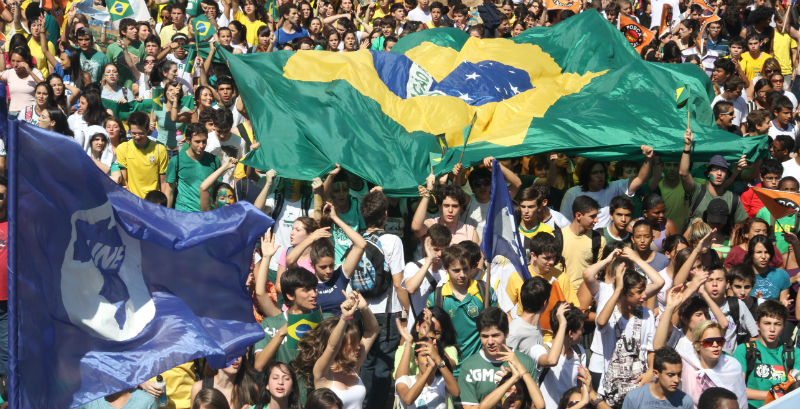 The history of representative democracy in Brazil through the right to vote is very recent, as is the right of young people to participate in the country's choices. Universal suffrage, allowing every citizen to have the same right to vote, was guaranteed only in the Brazilian Constitution of 1988. As a result of a victory for the student movement, the guarantee of optional voting for young people aged 16 and over was also included. However, in 2022 the number of 16 and 17 year-olds able to vote is the lowest in history since this right took effect.

Throughout history, the engagement of youth in politics has been synonymous of resistance every time democracy is threatened. The youth bravely resisted the Brazilian military dictatorship in 1964, which for years persecuted and murdered young people who opposed the military government. In response, they resisted and organized the largest demonstration ever seen at the time, known as the Walk of the Hundred Thousand, refusing to accept the authoritarian abuses of the military government. They were at the front lines in the Direct campaign after more than 21 years without direct elections in the country for president.

Whether during the most difficult times in history, or after redemocratization, the struggle of the young and students continued to ​​guarantee not only a “education for liberation”, but education as a gateway to a place of transformation of reality. They won the approval of the National Education Plan, guaranteeing 10% of GDP for the education sector as well as 75% of oil royalties and 50% of the Pre-salt Social Fund for education. The adoption of social and racial quotas in higher education resulted in transforming and building a Brazilian classroom with the face of diversity.

Today, not only those who fought to ensure these achievements, but the younger ones who had the opportunity to live in a Brazil where education was a gateway to a more dignified future, see this reality dismantling. At the beginning of 2021, more than 90% of the budget allocated to the promotion of Brazilian research in universities was cut by the Ministry of Science and Technology. As a result, hundreds of students and researchers covered by the program had their scholarships suspended.

In the world of work and opportunities, this reality is no different. There are 7 million young people who are either unemployed or have given up looking for a job. Although prohibited, almost 2 million children and children aged 5 to 17 work in the country, according to the Brazilian Institute of Statistics and Geography (IBGE). As if exclusion in education and the job market were not enough, according to the Atlas of Violence 2019, Brazil has rates similar to the most violent countries in the world. The most affected, forming the group of “youth lost to premature death”, are young people, mostly with low levels of education, and black people.

It does not seem to be a coincidence that, in a period marked by policies of exclusion against youth, the participation of young people able to vote in elections is the lowest in history. In Brazil, voting is mandatory from the age of 18, and anyone between the ages of 16 and 17 can take their voter registration and leave their mark on the country's history. However, while 6 million teenagers have the right to vote, in January only 10% of minors who are eligible had registered as voters.

In order to try to reverse the situation in recent months, several Brazilian sectors have joined a campaign to mobilize young people to take their votes. Created by the Superior Electoral Court (TSE), the campaign “Every vote counts" brought together everyone from football clubs, singers and artists, to Hollywood celebrities on social media.

In one of the most critical moments in history, the youth who have always been on the front lines in Brazil's decisive moments receive a call to help rebuild the country. A call to be protagonists of their own history and to participate in the decision of how the country will be in the next four years. Showing that your generation has a lot to say and that the youth have a side - the side of life, of democracy and dignity. By doing so, they will be marked in history as the youth that will make Brazil a place where it is possible to dream again.