Hostile Architecture: What design is doing to the homeless 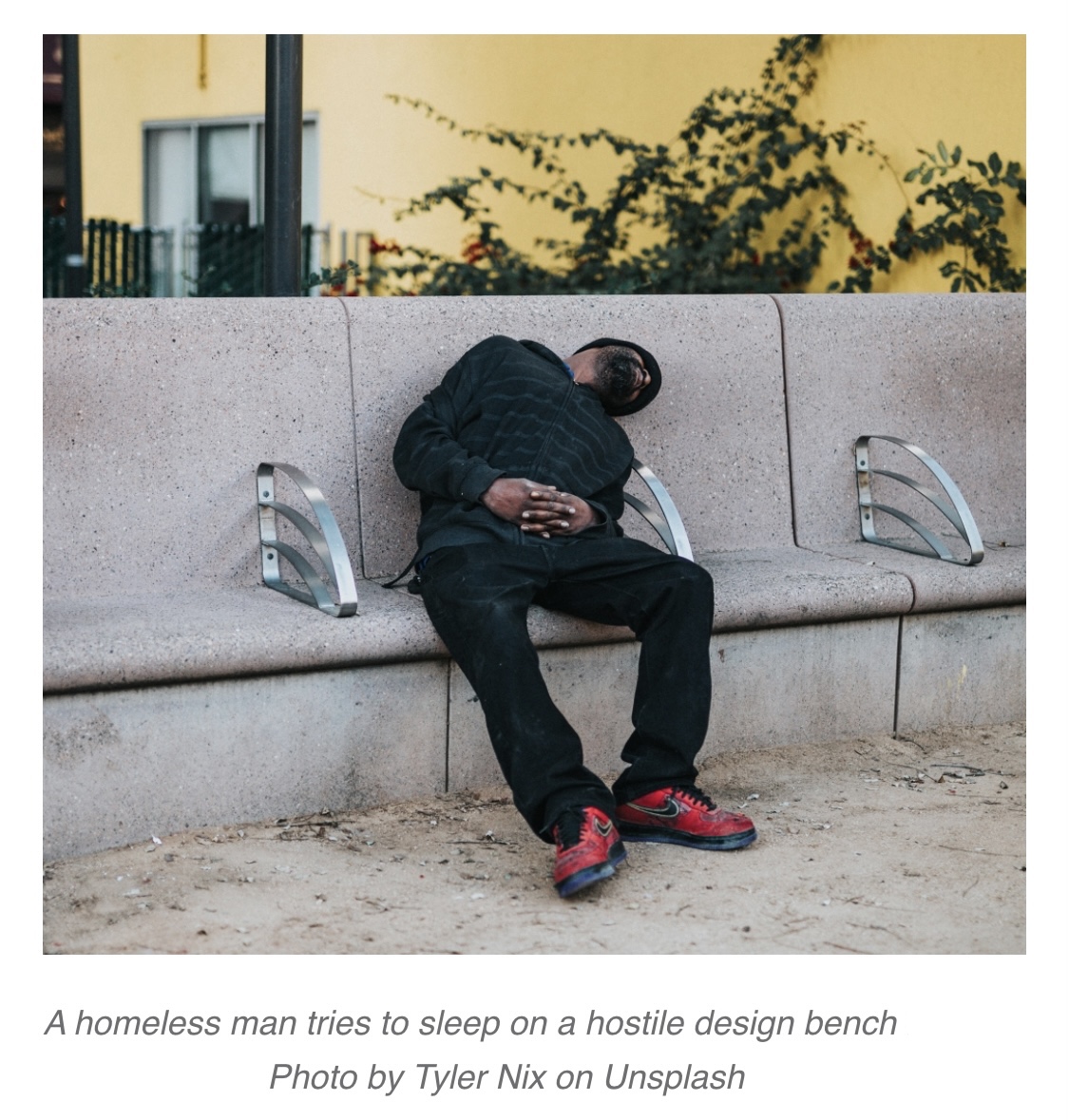 Almost always the last resort, rough sleeping is a harmful and isolating experience. Those who sleep rough are some of the most vulnerable in society. As the number of homeless people has almost doubled in the last ten years, any section of land or place available will likely become a shelter for the night.

Since homelessness is one of the most visible social issues, society can easily become blind and desensitised to it. Yet, throughout the UK, hidden in plain sight, are subtle design elements hindering the homeless from seeking refuge in public spaces. This phenomenon is commonly referred to as ‘hostile architecture’ or a more euphemistic term is ‘defensive architecture’.

It is not uncommon for architects to be enlisted by companies or governments to ensure that public spaces are free from antisocial behaviour. There are a variety of “anti-homeless” bench designs lining the streets to deter people from sleeping there. “Hostile architecture” has become a term to describe techniques that discourage people from comfortably lying, such as concrete studs and excessive railings in public spaces.

There are subtle ways hostile architecture may appear, such as perching benches found at bus stops, slanted seats, and separators that prevent people from lying down. More malicious are surfaces embedded with metal spikes and sprinklers that drip water overnight to deter people away from the premise.

Several examples of these different forms of hostile architecture have flourished in the UK’s urban areas to prevent misbehaviour and to loiter as well as monitor how public spaces are used.

At first glance, hostile architecture appears as a creative solution for citizens and communities. Sculptures such as large boulders and thin, curved benches will seem like abstract architectural art, but in fact, they are designed to keep homeless people from loitering. In order to hide from their true purpose, these designs are usually created as minimal, even attractive. The implementation of hostile architecture is immoral and inhumane because it attempts to solve a problem at someone's expense and hide the outcome of homelessness instead of tackling mass social issues such as lack of jobs and rising rent prices.

Some architects and designers have resisted this architectural policing by assisting those without shelter. To try to ameliorate the mal-effects associated with rough sleeping, design studios have created a wide variety of portable shelters, tents that unfold from backpacks, tiny homes on wheels, survival pods, and cardboard shelters that are collapsible as well as flame-resistant and waterproof to provide less dangerous living conditions for homeless people.

Some architects and designers have resisted this architectural policing by assisting those without shelter. To try to ameliorate the mal-effects associated with rough sleeping, design studios have created a wide variety of portable shelters, survival pods, tents that unfold from backpacks, tiny homes on wheels, and cardboard shelters that are collapsible as well as flame-resistant and waterproof to make living conditions less dangerous for homeless people. After closely working with charities and handing out sleeping bags to people on the streets without shelter, designer Abby Brazier found that, as soon as the sleeping bags become wet, they are almost impossible to dry, and direct contact with the ground exposes the bags to further coldness. Brazier designed an instant shelter called the 'urban caterpillar' to reduce this exposure. A light and portable shelter made from waterproof material with an elevated surface area lifting the rough sleepers off the cold ground so that the material isn't exposed to the cold. The shelter can be built instantly, allowing people to help themselves.

The dangers of hostile architecture aren't hidden from city planners.

Rather than fostering a sense of community, implementing hostile designs of park benches and excessive railings limit it. We are defensively developing our cities, deciding who can walk where and where people are allowed to sleep, but above all else, reducing the visibility of homelessness out of the public eye.