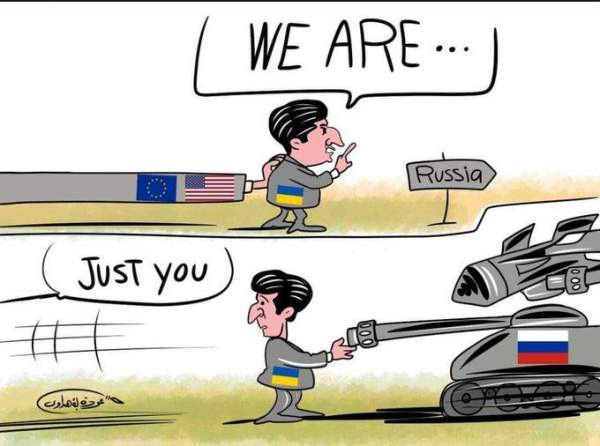 On 24th February 2022, when Russia invaded Ukraine, the importance of Ukraine expired for the west; they used the country to the extent that it was expendable and then threw it under the bus. It was just like what happened with Georgia in the late 2000s. The U.S trained and armed their troops and even promised Georgia the NATO membership, and then deserted them as soon as the war unfolded. Even Afghanistan was used in the 1980s by the Americans when they made them fight the Soviet forces. Where exactly did Ukraine miscalculate and went wrong?

“Ukraine will never be left alone”:

As late as the end of January, President Zelensky did not buy the war hysteria because, in hindsight, he actually had more reasons to believe that Russia would just withdraw after trying to threaten the sovereignty of Ukraine. Why wouldn’t he? He evidently had the world’s most powerful military alliance promising support; lethal weapons were delivered to the nation almost every day. Moreover, almost all the neighboring nations and the U.S itself promised to enforce unprecedented sanctions on Russia. In April 2021, much before the Russian invasion, U.S President Biden assured the Ukrainian President that, “Ukraine will never be left alone against Russian aggression.” Reassuring later in September 2021, President Biden personally supported Ukraine on the issue of granting NATO membership and refused to guarantee Ukraine’s neutrality.

The U.S even refused to pull back from NATO’s eastern flank and instead expanded military assistance and flooded Ukraine with lethal weapons. Cumulatively, these decisions of the western nations to support Ukraine led the country on to believe that the west was their trump card. Thus, President Zelensky held on and decided to fight and defend every inch of the Ukrainian territory. He assumed that this was just the start and more aid would be delivered from the west, little did he know that military aid was NATO’s maximum limit. The West promised him sovereignty but they refused to fight for it.

Shield of the West:

In an announcement, President Zelensky quoted Ukraine to be the shield of the west as it holds one of the largest armies along the country’s borders and not in European Union’s territories. He declared comprehensive security in Europe to be impossible if Ukraine’s sovereignty and territorial integrity is not restored. This is where he misread Ukraine’s importance to the west. They used the country as a pawn and merely assisted in terms of military, economic and humanitarian sanctions.

The U.S openly declared Putin as a ‘bloodstained aggressor’ who has unleashed violence and chaos. President Biden warned that Putin will pay its price in the long run and that this war in Ukraine will leave Russia weaker while the rest of the world will emerge stronger. But, when it came to fighting for the Ukrainians, America refused to engage in the conflict with the Russian forces and classified the sanctions and assistance as defensive modes. “We have no intentions of fighting Russia,” says President Biden but we are prepared to do more if Putin does not stop a further invasion. He highlighted that American ground forces, air squadrons, and ship deployments have been mobilized to Europe to defend their NATO allies in event of Putin’s decision of further moving west.

The U.S has imposed penalties on Russian debt, made Moscow incompetent to raise money from the U.S and Europe, the Russian Central Bank is cut off from the U.S Dollar transactions (where China became the knight in shining armor offering their currency). Switzerland, a perennially neutral country has shown its support towards Ukraine by freezing Russian assets. Other European countries such as Germany assisted in weapons and even halted the pipelines. Even the Oligarchs in Russia are revolting against Putin as they are suffering from international restraints. But all these measures are substantially weak to restrain Putin. Then why are these countries shying away from a collective fight against Russia when even the civilian population of Ukraine are forced to bear arms?

If they go down, we go down with them:

In a recent statement, the President of the U.S.A said that they will not fight a war against Russia in Ukraine as a direct confrontation between NATO and Russia will inevitably lead to World War III. But, the U.S will strive to defend every inch of the NATO territory with the full might of their collective power. Thus, they refused the demand of the Ukrainian President Zelensky to help make Ukraine a No-Fly Zone. The U.S Ambassador to the United Nations showed no ambiguity in declaring that they will not put the American troops in the air or in any danger, the most they could do is to provide the Ukrainian troops with the ability to defend themselves.

Thus, in a recent development, the U.S stopped Poland from sending fighter jets for Ukrainian use via Germany on the grounds that the deployment should not be done from a NATO territory, as this would upset Russia. Therefore, all the western countries headed by the U.S.A have taken a step back in their support for Ukrainian sovereignty. But the question stands, Who will trust these countries to support their kins when Russia decides to invade further west? What are the chances that they would stick together during hostility and NATO wouldn’t just fall apart?

The Former NATO Ambassador Kay Bailey pointed out that Putin is testing the U.S and NATO allies and that their response will determine his next steps. Since so far, the measures have been weak, this may embolden Putin to move to one of the Eastern European members of NATO that share a border with Ukraine. So, is the west merely misreading Putin’s intention of not moving further west? And if this is the case, Was Zelensky right in classifying Ukraine to be the shield of the west? Is the European sovereignty compromised?

Zelensky may have surrendered to the Russian wish of Ukraine’s neutrality and non-alliance with NATO, but the spirit of a sovereign nation is threatened.