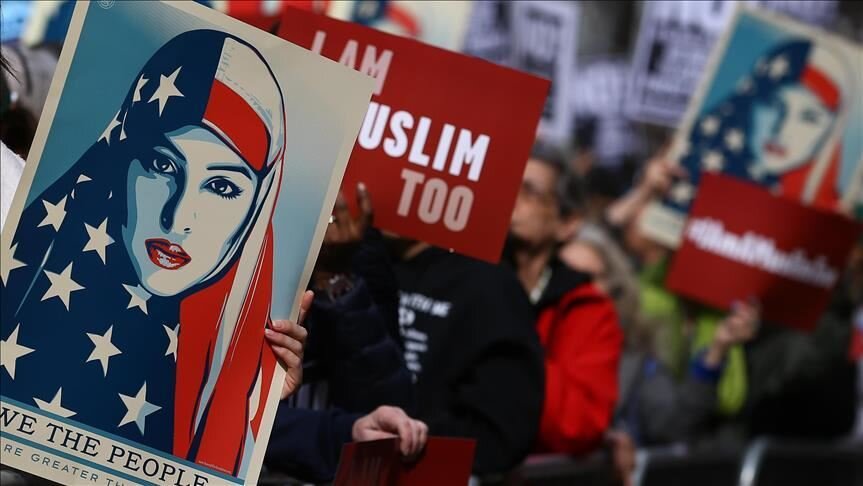 The U.S. House of Representatives voted 219-212 to pass Democratic Representative Ilhan Omar's legislation to create a special envoy to combat Islamophobia. However, one questions the hypocrisy of the U.S. for its continuous attacks on Muslim countries.

Post 9/11 was a new era for Muslims living in the country as their national and religious identity was challenged. Shortly after al-Qaida terrorists attacked the Twin Towers and the Pentagon, the American public and government began to openly discriminate against Muslims by using the incident of 9/11 as a tool to justify the blatant discrimination. The situation has since only worsened with policies and legislation introduced that openly target Muslims and unduly restrict their freedom and physical and verbal attacks on those individuals displaying a visible manifestation of their religious identity.

Physical and verbal abuse, alongside a sense of othering of American Muslims, created a toxic environment for the latter. On top of that, the media's bias only worsened the situation as most of the population would only inherit information about Islam through what they consumed on television. Despite being scant, the misinformation sparked powerful voices of hatred, successfully fuelling, which fogged the minds of the American people and the minds of people around the world.

One conspicuous example is the discrepancies between the portrayal of 'Caucasian' terrorists and terrorists with a different background.

The media seems reluctant to call white terrorists as the term now holds a special status for those with a Muslim background. What is interesting, however, is that according to a new report from The Nation Institute's Investigative Fund and The Centre for Investigative Reporting's Reveal that between 2008 and 2016, there were almost twice as many terrorist u=incidents by right-wing extremists, as by Islamist extremists in the U.S. Despite that, governing presidents have often focused their rhetoric on countering Islamic extremism instead of both Islamic and white supremacist extremism.

Nonetheless, it is crucial to remember that 9/11 was not the inception of the politicized conversation about the truth of Islam or the outright torment Muslims have had to face. "Since 1980, the U.S. has invaded, occupied or bombed at least 14 countries in the Islamic world," resulting in thousands of casualties. Thousands of people who have lost loved ones lost their abode and sense of identity by being moved to other countries and mistreated as 'Muslim refugees.'

Below we will focus on two Muslim countries that the U.S. targeted and the critical role they played.

In response to the 9/11 terrorist attacks and the unsuccessful negotiation with the Taliban to hand over Osama Bin laden, a U.S.-led coalition began attacks on Taliban-controlled Afghanistan with an intense bombing campaign with support provided by other countries. It started its invasion with an aerial bombardment of Taliban and al-Qaeda installations in Kabul, Kandahar, Jalalabad, Konduz, and Mazar-e-Sharif.

Shockingly, the people of Afghanistan never saw freedom before that either, as they were under the extreme fundamentalist Taliban government that had ruled most of the country since 1996.

During their rule, the Taliban perpetrated countless human rights abuses against its people, especially women and girls. During that time, many Afghans faced extreme poverty, with around 4 million Afghans estimated to have suffered from starvation.

Although Bin Laden was captured and killed in Pakistan in 2011, the invasion lasted two decades, becoming the longest war in the U.S. history which ended with the collapse of the Afghan government and Taliban victory, after which, on August 31, 2021, President Biden declared the war in Afghanistan officially over. The conflict caused the death of 69,000 Afghan security forces, along with roughly 51,000 civilians and 51,000 militants. According to the United Nations, around 5 million Afghans have been displaced by the war since 2012, making Afghanistan the world's third-largest population.5

The positive impact of the US-led invasion.

Although it may come as a surprise, the US-led invasion was a hope for many Afghans who saw a bright future for their country after being unleashed from the shackles of the extreme Taliban government. It boosted the country's economy, and cities' overall quality of life improved tremendously. Reconstruction began, and new employment opportunities were created for the Afghan people.

However, the optimism did not last long enough. In 2003, the U.S. got involved in the Iraq war resulting in the diversion of scarce intelligence and reconstruction resources to Iraq at critical moments in the fight for Afghanistan, as per The New York Times newspaper.

Akram Arife, a lecturer at the Kabul University, said:

"The U.S. had focused on Kabul and ignored other parts of the country. Most politicians that Washington supported did not have a deep connection with Afghans. Their understanding of Afghan society was flawed, certainly not sufficient to run the government," adding that the changes were not organic and therefore didn't last after the U.S. forces exited the country."

Life's point still stands as one fails to disregard the achievement of the U.S. after spending two decades and millions of dollars in the war-ravaged country? With the resurgence of the Taliban in the second half of the 2000s, civilians paid a heavy price as they saw a spike of violence in the country, with most losing everything they had tried to gain and rebuild for themselves in the past 20 years. Suicide bomb attacks became a routine, and civilians paid a heavy price.

Israel has occupied Palestine's claimed territory since the Six-Day War of 1967. The world has seen the torture and violence Palestinian children, women, and men have incessantly faced through social media. A recent case study shows that over 22 years, "not only did Israel orchestrate attacks against Palestinians every Ramadan, but more than 2,000 Palestinians were killed in total across the holy months."

Being a global superpower, the U.S. has played a crucial role in fuelling the conflict between the two states as "it has provided Israel with the highest amount of financial and military assistance of any other foreign country." 7 The United States was also the first country to recognize Israel as a state in 1948. The latter also has had a string of representatives of the government being traditionally pro-Israel such as the current Vice President - Kamala Harris, which only further desensitizes the nation to the inhumane actions of the settler colony.

"I stand with Israel both because of our shared values, which are so fundamental to the founding of our nations. I believe the bonds between the people of the United States and the people of Israel are unbreakable. We can never let anyone drive a wedge between us."

When asked by the New York Timese if she thinks Israel meets international standards of human rights, Harris said "yes."

This hypocrisy is present in the introduced bill as it disallows the use of the funds made available according to the bill to promote or endorse a boycott, divestment, and sanctions movement ideology" 10 which, in essence, condones the ethnic cleansing of Palestinians.

Some may argue the U.S.'s camaraderie with Israel has a hidden agenda to maintain power and have powerful countries as allies for personal gain, among many other things. "Israel's frequent wars have provided battlefield testing for American arms, often against Soviet weapons, and Israel's intelligence service has assisted the U.S. in intelligence gathering and covert operations […]" 11.

If one were to attempt to dive into the intricacies of Islamophobia in the U.S., it would be plunging into a never-ending abyss.

According to a ProPublica review, two hundred and twenty-one publicly reported hate incidents targeting mosques during the April 2013-June 2017 period.12

A 2013 Carnegie Mellon University study found that Muslims had "13% fewer call-backs" than Christians after submitting identical job applications to the same establishments.13

"After the terrorist attacks on September 11, 2001, the Equal Employment Opportunity Commission reported that religion-based discrimination against Muslims had increased by nearly 250 percent. Moreover, the number of discrimination claims made by Muslims over four years, from 2001 to 2005, nearly doubled compared to another four years."

A 2020 survey conducted by the Othering & Belonging Institute at UC Berkeley revealed that nearly 77% of Muslim women reported experiencing Islamophobia. Almost 8% of American Muslims reported a suicide attempt in their lifetimes attributed to discrimination and racism, and stigma surrounding mental health in American Muslim communities.

In October 2019, a 16-year-old Muslim girl athlete from Ohio was disqualified from a cross country race because she was wearing a Hijab.

Several scholars consider the Donald Trump administration the first genuinely anti-Islamic government in recent American political history. During Donald Trump's candidacy, he and his campaign proposed policies that would adversely affect Islam and issued numerous anti-Islamic statements that would continue throughout his reign. These included calling for "a total and complete shutdown of Muslims entering the United States" and supporting the idea of ​​closing down mosques.

President Trump also expressed interest in creating a surveillance program to spy on Muslims. In an interview in 2016, Trump declared that "Islam hates us” and reiterated that there is a "Muslim problem" in the United States and around the world.

• The 'Combating International Islamophobia Act' allows the Department of State to establish an office to monitor and combat Islamophobia and addresses related issues.

• The legislation also seeks to establish the position of Special Envoy for monitoring and combating Islamophobia, who shall head the office.

• The bill also requires specific existing annual reports to Congress about human rights and religious freedom in foreign countries to include information about Islamophobia, such as information on acts of physical violence or harassment of Muslim people, instances of propaganda in government and non-government media that attempt to justify or promote hatred or incite violence against Muslim people, and actions taken by a country's government to respond to such acts. The office shall coordinate and assist in preparing these portions of the reports."

The House vote came in only a few weeks after a video emerged showing first-term Republican lawmaker Lauren Boebert calling Ilhan Omar a member of the "jihad squad" .19

After digging deep into the origins of this bill, it comes as no surprise that it is Muslims in the position of 'supposed' power who are attempting to create a safe environment for Muslims residing in the U.S. when in reality, the majority still hold feelings of extreme hostility towards Muslims. The bill does not come in as a beacon of hope as, despite attempts to save American Muslims from being alienated, many continue to be targets of anger and racism.

Afghanistan- A state of diplomatic turmoil and political dilemma