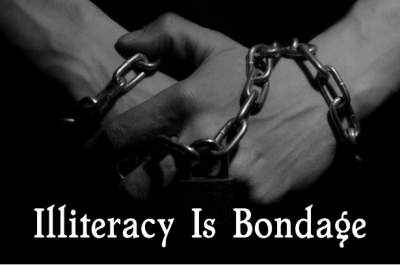 India is a diverse country, diversity with regards to art, culture, traditions, and resources but still, some issues are blocking the country’s growth. After India got its independence it is found that illiteracy is a bane for our nation. Though India, which is the home of the first-ever university “Takshila” of the world now has the highest number of illiterate people. Illiteracy has always been a social issue for ages in our nation. Around 900 million people in whole worldwide are unable to read or write. A United Nations report said that India has the highest number of illiterate people in the world that is 287 million in number. They will be calculated as the amount to 37% of the global population.

Literacy plays a vital role in the economic development of a country. Some of the most advanced technological and developed countries like USA and China has high literacy rate i.e., 99% and 97% respectively. However, India has a literacy rate standing at 77.7% of the adults in our nation. Although India has established its recent literacy rate of 74.04% (2021) from 12% in proportion with the time of independence in 1947. As per the population census of India 2011, it is noticed that the literacy rate of India has developed over 9 percent in the past 10 years. The literacy rate has gone up from 65.38% in 2001 to 74.04% in the year 2011.

As per the provisional figures of the census, in India, the male literacy rate is 75.3% and for females is 53.8%. And hence they struggle to earn and not being able to get a proper living. And that’s the reason our society is still developing. It is a social problem that affects both the illiterate individual as the whole society. But still, the battle continues to be happening.

There are a total of 83,890 government primary schools but the registration of kids continues to be below as compared to the year 2014-15. However, a ray of hope is found in the year 2014 but the rate has come all the way down to 6.1% in 2016-2017. It is noticed that in most of the locality the children between 10- 18 age group are working in industrial area as they are not introduced to the correct education.

And the main cause of illiteracy in their homes comes with poverty and family status. Also, it is noticed that children belong to slum areas and uneducated families are suffering from illiteracy. And this complex social issue will go on until or unless they’re aware of the necessity of education. However, the Madhya Pradesh authorities have opened 457 government schools and colleges to coach the kids to unravel this issue. Also, the state has shown major improvements in the contribution towards a developing nation.

Illiteracy, a bane to the society

To begin with the definition, Illiteracy is defined as the inability to read or write or we can say the lack of education in a particular field to communicate effectively. It is a deep-rooted issue that belongs not just to at least one strand or tier but to everyone. People who are unable to read or write encompasses a greater chance of being unemployed or having a lower income which ends up with a low financial status. It is noticed that illiteracy increases the country’s unemployment rate and lowers the level of community involvement. A large part of our country is functionally illiterate resulting in a major loss in every area. Illiteracy affects all areas of life. Those with a lack of knowledge are way more likely to live in poverty because they are unable to implement reading, writing, and speaking in everyday life. Plenty of youngsters are raised in households where parents are low-skilled and also the cycle goes on from generation to generation and results in illiteracy.

There are plenty of factors that cause illiteracy but the foremost frequent causes of illiteracy are conservative family background, absence of adequate schools and teaching staff, parents with less education, lack of stimulation, dropping out of school, lower level of schooling, serious health issues, difficult living conditions. However, parents with less education are possibly to transfer this issue as they don’t value the education system. According to the United Nations Educational, Scientific, and Cultural Organization (UNESCO) to decrease the illiteracy rate globally, international literacy day was met with 774 million who are still illiterate and among those 493 million is female. And through the report, we can surely say that gender discrimination is the root cause of illiterate females in our society.

The consequences or effects of illiteracy are devastating for every individual. It causes several effects like unemployment, low confidence, disrespect, low community involvement, and many more. There is a strong correlation between illiteracy and poverty, health issues, and crime in almost every society. Additionally, unemployment leads to poverty and that poverty causes child labor, criminal activity, human trafficking, poor health, prostitution, and whatnot. An illiterate person has always a weapon of disrespect because they don’t have the power to speak out their thoughts.

People who are facing illiteracy have always lacked in developing skills, information skills, and cognitive capabilities. Illiteracy creates many hurdles within the lives of individuals as they are not tuned into their rights and have trouble filling official forms, applying for jobs, giving vote, and other grounds. This affects their lifestyle and the development of our nation. It is found that nations with a higher number of illiterate people have lower per capita income and that’s completely giving the direction of the low economy in our country.

How this issue can be solved?

Illiteracy is something that is affecting the well-being and development of our country. But just like factors, there are solutions as well. There is no particular way to solve this issue but it can be eradicated by following the multiple levels given below:

• Firstly, the participation of parents in education is a must. Parents can create a learning environment and this will motivate their children to attain moral values and better education.
• The primary reason for illiteracy is the absence of a better learning place. School learning is the root of a proper education because students learn from zero to a hundred in the class itself. So developing good teaching staff at learning places can help in tackling the matter of illiteracy. Also, the education system should encourage students that struggle with speaking and writing.
• Furthermore, running awareness campaigns and programs can help a lot to overcome negative attitudes associated with illiteracy. This includes developing a decent way of thinking for people that are ashamed of being uneducated.

• According to the constitution of India, every individual has the right to education, and keeping this in mind the government of each state should provide free education to families who cannot afford their child to travel to school.

Initiatives are taken by the government of India in eradicating Illiteracy

The government of India (GOI) has already taken multiple steps to eradicate the issue of illiteracy in our nation. They are as follows:

· In 1993, the supreme court said that “children had a fundamental right to education”, and that’s where the Right to Education Act (RTE) under Article 21(A) exists.

· The 86th amendment act, 2002 inserted article 21 (A)within the constitution of India to provide free and compulsory education of all children in the age group of 6 to 14 years.

· To improve the nutritional status of the school children, a Mid-day meal scheme was launched by the government of India (GOI).

· In 2015, a great initiative program Beti Bachao Beti Padhao was taken to save and empower the girl child.

· The mission “RashtriyaMadhyamikShikshaAbhiyan”, was launched in 2009 to boost the standard of secondary education.

Illiteracy is not a disability, it can be defeated. And in my opinion, we can eradicate this issue from the root by creating awareness about the importance of education to urban areas, slum areas, low-skilled families, and those who belong to backward areas. Also, we can be the helping hands by organizing campaigns, street shows, vocational training, nukkad-naatak, or holding events regarding this rising issue of illiteracy. As MalalaYousafzai said, “One child, one teacher, one book, and one pen can change the world.”