Inequality in Equality. Inequality, the element of Equality. 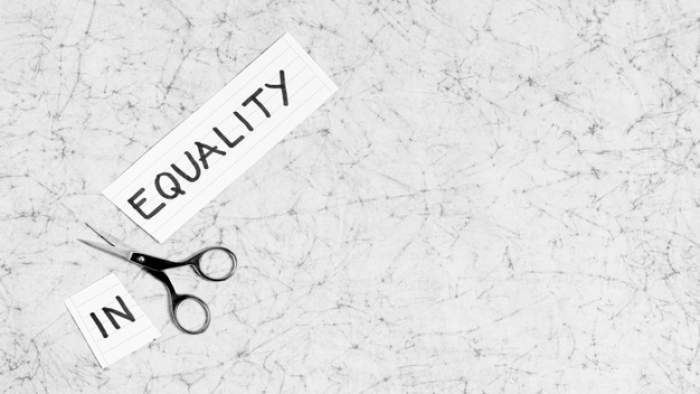 Read on to understand why I think so! But does my opinion, ‘What I think as an individual really matter?’ It does, for me, and with the Equality of using the platform and freedom of speech, the privileged rights of us led me here! You totally have the freedom of choice to either skip reading or understand my point of view. And, by having said that, I am moving on to the ultimate question: the equality is justified and whole-heartedly ‘accepted,’  but when you're ‘giving?’

Even a theatre that is open for everyone watching movies can accommodate diverse people, the Equality served! Yet, ultimately, depending on the price of the ticket got, they give preference about who gets to occupy which section of the seats. The concept of Equality assures equal rights and opportunities. As the rich are edging towards wealth and the poor diving deep into the sinking poverty, an obvious gap increases. To bring the different sections of people together and build the bridge irrespective of their respective income, caste, religion, the concept of equality is introduced.

Being the privileged section of society, the rich at times are reluctant to share a similar platform of equality. Hence, with their hard-earned income, they avail themselves premium services. Utilizing equal opportunities is still a dream for many, as their life itself is unfair! Innocuously speaking, inequality exists. The government curbs inequalities by taking stringent actions against those found guilty of discrimination. An elevation to the backward people gives them a push to strive for better, by taking undue advantage of Equality. In a genuine sense, equality should eliminate the barriers, differences between classes and the terms rich and poor do not have any space in the dictionary of equality.

Nevertheless, these words are widely used, especially when addressing Equality. Subsidies, grants, reservations provided by the government are encouraged, but what if the same government is on the receiving end? Would it still be considered equality when you are asked to pay an equal amount as taxes? That undoubtedly creates a burden! In such a situation, the privileged rich will escape from paying additional tax, and it will suck the struggling poor into pessimism. However, tax grants and tax relief up to a specific amount for all sections of earning society ensure Equality. So, the Right to Vote, Equal opportunities, Equal subsidies, unequal tax collection, unequal price commodities (products are sold at subsidized prices to the poor, in the ration shops) are all part of equality.

Why is inequality present in society?

Fate! Blame a few while others become complacent, accepting things the way they are and give up even before they try making their situation better. We often ignore how inequality starts right at home. The gender bias disclosed by data reveals India has the highest number of excess female deaths.

Designations and authorities established to create a false impression on who deserves respect and how much of it. Every individual holds the right to live in a dignified manner, and our morals teach us to respect everyone, irrespective of our positions. Although this is reiterated, the treatment of laborers, daily wage workers is prejudiced, rooting up inequalities. As these two areas immensely influence our lives, it constantly exposes us to this paradigm.

Despite disparities, it provides individuals with equal opportunities. Any person can become a lawyer, doctor, and any other profession they desire, yet differentiations emerge after acquiring the positions.

The existence of the caste system since ancient times deployed deep-rooted beliefs of superiority and inferiority complex which unfortunately still prevail in the society. As we all invest efforts to unite irrespective of diversities, there are people who don’t want to accept everyone as equal!

The caste system that created disruptions now assists the government in making the lives of those confronted with injustice, better by the formulation of laws and implementation of schemes. Had there not been differentiations, the part of society would try to dominate and suppress hiding the miseries until it silences them.

Reservations are good, as they provide a tower of strength to the weaker sections to make them equal with everyone. Certain sections of the upper league greedily exploit the resources provided to weaker sections. We can notice such wrongdoings during admissions into universities and buying products from ration shops in huge quantities.

Authentication of original certificates can curb these malpractices by the official universities at the time of granting relief. It seems unjust when the gap between people based on their caste increases tremendously because of the reservations provided by the government. They set the cutoff marks and reservation benefits to weaker sections at the least qualifying marks, for those considered upper caste cannot get the seat if they fail to quality high percentage fixed for them. Hence, the government needs to amend policies in a way that benefits everyone without burden on anyone.

What should the government do to fill the gap?

Frankly, the government is heading on the right path by contributing its best efforts to ensure a better living standard for those below the poverty line. It serves not just the government every individual is accountable to chip in to ensure equality by the elimination of discrimination.

Hence, the segregation of classes becomes essential to ensure Equality is being served right. The equality definition that suits you depends on which side of the mass you stand.

1 year, 9 months ago by Jodieapaterson

I definitely think that ensuring equal opportunities for everyone is a big thing the gov should do. There is such a huge divide at the moment where people with money get so much opportunity compared to people without money. http://www.jodiepaterson.com

GENDER SENSITIZATION: INEQUALITY HAS NO GENDER