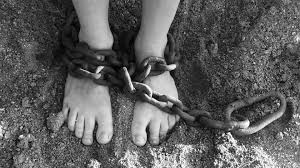 The Disturbing Reality of Child Trafficking in India

"Now I wish to introduce the following idea. Between the age limits of nine and fourteen there occur maidens who, to certain bewitched travelers, twice or many times older than they, reveal their true nature which is not human, but nymphic (that is, demoniac); and these chosen creatures I propose to designate as 'nymphets.' “ (Lolita, 1955)

Even if the reader is not aware of the context of the above prose, there is a ghastly feeling accompanying it. Lolita was a seminal literary produce of 1955 that detailed for the reader lust and allure of one man towards a child. In the society today, it is the moral responsibility of the adults to protect the ‘innocence’ of children. This protection sadly is only available to the lucky few. The concern that torments the reader here is that a child’s body is being sexualised. This understanding terrifies the society today because the child is neither biologically prepared nor consciously aware of what a sexual act can entail.

Child Trafficking is a crime that our society remains silent on, even after having a Nobel Laureate Kailash Satyarthi work tirelessly in improving awareness and accessibility of children to Child Rights. National Crime Report Bureau released a special report on the presence of child trafficking in India, it found that 180 children go missing every hour in India. As of now, there are 62,134 children missing in India. The same report details that Madhya Pradesh tops the list of States with most children missing and Assam has shown an exponential increase of 41% more cases being filed for children who are missing. UNODC released a global report on trafficking in 2018 which pointed that trafficking is largely a result of two key motivations, sexual exploitation and forced labour.

The intersectionality of gender plays a very unique role within these motivations., majority of the victims of sexual exploitation are women or girls and victims of forced labour if intended for care work were girls and for other form of forced employment were boys. Ministry of Homa Affairs in 2014 had analysed this intersectionality via data which pointed to 61% of all child trafficking victims to be girls. These children are destined towards a life of child abuse with no recourse to any help for various reasons ranging from complete lack of awareness of the crime or the laws present to protect them, the understanding of agency that they can take action and most importantly no knowledge of how to take recourse to law.

The role that the society needs to play is to generate awareness amongst children and parents of the key provisions of Protection of Children from Sexual Offences Act, 2012 where non reporting of child sexual abuse entails a 7 year term for imprisonment. POCSO Act, in India has been diluted as a result of ambiguity yet the law holds within it the provision to take recourse to law for penetrative, non penetrative child sexual abuse and pornography.

India has two helplines for child victims 1098 and 181, who have played a proactive role in rescuing victims of trafficking. Child Trafficking More dangerous than human trafficking because the victim is not conscious of the abuse or the victimisation. As pointed to in the beginning of this article children, the child has no knowledge of the act that has been perpetuated or awareness of what their rights entail. For some children, the perpetrator is the only lived reality for the child. This results in most cases, the child develops a relationship with the abuser. Reporting and Awareness of the crime in such conditions becomes more difficult. As a country we need to strive in ensuring that the four pillars of Child Rights recognised by the United Nation Convention on Child Rights become the bedrock of child protection, these are non discrimination, devotion to the best interest of the child, the right to life, survival and development.

WHY ARE MEN SCARED OF FEMALE SEXUALITY?