Is India walking the non-alignment talk? 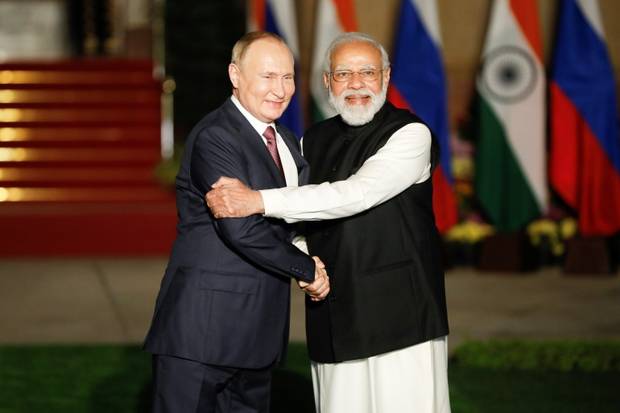 Last week on December 6th, Russian President Vladimir Putin and Indian Prime Minister Narendra Modi signed a total of 28 agreements in a variety of areas-trade, technology and energy, during the 21st India-Russia annual summit. They also agreed to renew their defence program for the next ten years, 2021 to 2031. The military cooperation between Russia and India at Delhi attempted to strike a balance between Russia and the US while keeping an eye on China’s growing influence.

Since the Modi government came into power in 2014, it has focused on modernizing and levelling the Indian armed forces. Various significant deals and agreements with the USA, Russia and other countries are signed to boost its defence sector. The prime focus of the centre is to make India self-reliant in the defence sector to curb any external military encounters.

In a big hoist to Athmanirbhar Bharat, India inked two major defence deals in 2021 with the USA and Russia.

A contract was signed between India’s Defence minister Rajnath Singh and his Russian General Sergey Shoigu to procure more than 6 lakh AK-203 rifles through Indo-Russia Pvt Ltd. Besides, Russia and India signed an agreement for arms production. The pact entails a deal to manufacture 6,014,427 Kalashnikov AK-203S in the northern Indian state of Uttar Pradesh, which will replace the in-service INSAS Rifle for the next ten years. The arms production agreement between Russia and India stands on the protocol of the 20th IRIGC-M&MTC.

It is a significant endeavour reflecting an increasing shift from acquisition to ‘Make in India’ in India’s defence sector.

To strengthen its military ties with the US, India signed a deal with the Defence Procurement Board (DPB) to purchase a total of 30 Predator drones from the US for its three defence forces (Army, Navy and IAF). The deal got inked, at a time when the first units of the Russian S-400 air defence system arrived in India. The drones include SeaGuardian/SkyGuardian variants of the MQ-9B worth $3 billion.

The strategy to purchase arms from Russia and USA has remarkably worked in favour of India for many years in different ways. However, given the security threats from Pakistan and China, India cannot wholly rely on the US for its defence. Thus, it affirms its desire for autonomy to build strategic ties with other countries, despite maintaining extreme tie-ups with the US.

This affirmation goes ahead with Vladimir Putin’s recent high profile visit to Delhi to facilitate its partnership with India for the upcoming years. Russia is the power source for some of India’s complex defence requirements like nuclear-power-submarines. Unlike India’s ties with other countries, partnerships with Russia solely focus on energy and defence. Russia shares only $11 billion bilateral trade with India, whereas India’s trade with USA and EU volumes at $146 billion and $71 billion a year, respectively, but Russia’s sales of military equipment is an utmost element of India’s commerce.

Simultaneously, India is in regular talks to convince Russia to become a part of the Indo Pacific, but neither Russia nor the US has agreed to it. Russia also sells defence equipment like the S-400 air defence system to China, which it sold to India, and is a matter of concern for the nation. India is highly dependent on Russia for high-tech and low-tech equipment and technology, which is undeniably impossible to receive from anywhere else. Thus, it wants Russia to keep India’s interest in the South and Central Asian region. One way to ensure this is through a significant purchase of an S-400 surface-to-air missile system, which will keep the position of India at prime consideration.

New Delhi is keen to offer a way for India and Russia to maintain their faceted relations with diversified security partners. This way, it can affirm that Russia doesn’t align with China. It will also assist both nations to get away from drifting into US-China dominated camps.

Besides, the US and Russia rivalry is rooted in history. Countering America’s Adversaries Through Sanctions Act (CAATSA) empowers the US to impose sanctions against countries for doing big defence deals with Russia. It was sanctioned against India for the purchase of S-400s between Russia and India back in 2018, which cost India a loss of $5 billion. However, India calculus has been awaiting the USA's take on recent events. If the US wants India to serve as an ally, it must waive the sanctions and allow India to sign weapons acquisition deals and partnership for its defence system autonomously.

Despite sharing a dependent history with Russia for arsenals over the years, India has significantly developed diversifying partnerships with the US worth $16 billion approximately since 2008.

India’s defence strategy has always focused on staying out of any of the blocs since World War II. Arms deals and the competition among them have allowed India to find a way to keep ties with both sides, but this has become more crucial since the upheaval of the Chinese People Liberation Army (PLA) on India’s northern borders since 2020.

The Indian Navy is now scrutinizing to buy Boeing’s F/A-18 aircraft, which would make it the only third operator in the Indo Pacific region along with the US Navy and the Royal Australian Air Force. Such mutual interests could further lead to more joint exercises.

The ultimate interest that India is seeking now is to prevent any challenges to its security from China, for which it is open to upholding the defence trade with any of the sides- the US or Russia. Whether America will help India to build its military system or not would lay the foundations for future relations. Meanwhile, Putin’s strategic values remain higher than just bilateral trade. He can use India’s concerns over America’s reliability in Russia’s favour.

Whereas Washington must recognize that although Russia remains a nettlesome strategic challenge, it would be troublesome if partnered with China.