It's almost one year, did you realise? 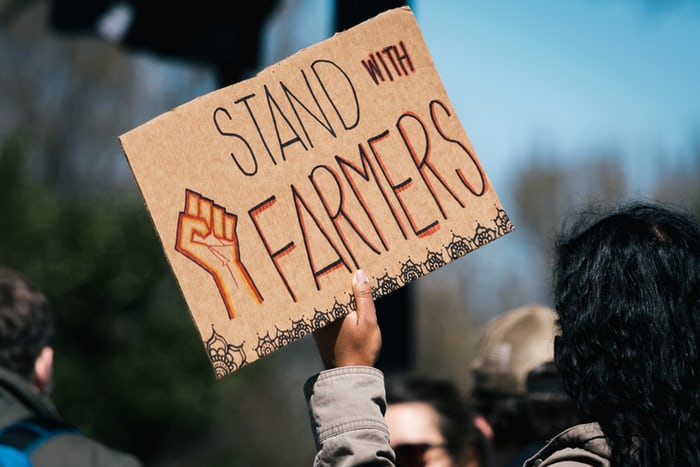 Among all the people associated with the Farmers revolt primarily centred on the borders of Delhi, Rakesh Tikait has an intriguing history of protesting for Farmers and their rights.

Yesterday, through a tweet he gave an ultimatum to the central government till November 26th to repel farm laws. Last year in 2020, around this time of year Farmers started to protest and demand to repel three laws passed by the government in September 2020.

11 rounds of Formal dialogues between farmers and central government didn't result in something in agreement by either side. Riots on 26th January and then lodging an FIR against Rakesh Tikait, Farmers Protest and its leaders have come a long way. It's been a full year of being attentive to the farmers then the government. Finding it exhausting to make a decision who's right and whose wrong?

Or do you know that the side on which you are in this tussle, is the right side to be on? Rakesh Tikait, a name which is in news consistently after the farmers' protest had begun. Ever wondered, how come he became the face of this Farmers Protest?

Well, the answer is in his past and within his family's lineage.

Rakesh Tikait M.A., LL.B. from Meerut University and a farmer. He joined Delhi police as Constable in 1992 and was then promoted as Sub-Inspector when he left the services and joined his Father's BKU. He contested the UP Assembly election, 2007 as a candidate of Bahujan Kisan Dal and In 2014, he contested the Indian general election, as a candidate of Rashtriya Lok Dal from the dear of Amroha. But he faced defeat both times.

Rakesh Tikait has been jailed and captive 44 times for protesting about farmers’ rights and demands. Farmers Protest has been aforementioned a Khalistani's Protest and to be allegedly acting on that Agenda. Several individuals in the favour of central government did a toll on Farmers and their Leaders.

FIRs lodged and tried forceful eviction of Farmers and then the masterstroke "Rakesh Tikait's tears reinvigorate protest." Somehowthis protest survived the ghastly second wave of COVID and farmers are still demanding their rights.

So, maybe we should take a glance at what they have been demanding the government finds so exhausting to grant.

The Government is presenting the same fact but at the same time assuring that MSP will be there.

Farmers fear seems logical as if there will be no MSP then the corporates would be free to do as they would seem best fitting their profit.

Secondly, they demand total repel of Farm laws which are

Why Farmers are fearful of Open Market?

In the US and Europe, open markets in the agriculture sector have been functional for six to seven decades. If open markets were so farmer loving and kind, the US or European farmers would not have been in the crisis. In the US, the suicide rate in rural areas is 45% higher than in urban areas. This is happening when the US farmers receive an average of $60,000 annual subsidy. Whereas, farmers in our country get only $200 annual subsidies.

The US also have contract farming. Despite all this, if the US farmers are facing severe crises, it is clear that market reforms in agriculture haven't helped the farmers. Even the chief economist in the US has observed that since the 1960s there has been a decline in farmers’ income.

The US agriculture secretary Earl Butz had made a famous statement ‘get big or get out. That is what exactly the markets in agriculture have been doing. The result has been that small farmers in the US have been crushed. Today, the number of farmers in the US is only 1.5% of the total population. Imagine what this could do to the population of officially anywhere from 90 million-plus to almost 150 million farmers?

If we consider Europe, agriculture receives the support of $100 billion every year still there are miserable. In the US, the average landholding is more than 400 acres (160 hectares) and in Australia, it is more than 4,000 hectares. If the open market model of agriculture has not worked for bigger landholdings in America, Canada, Europe and Australia, I am unable to fathom how it will be beneficial for small landholdings in India. According to the agriculture census of 2015-16, the majority of landholdings farmers are small and marginal. About 86% of farmers hold land less than two hectares in size. Instead of blindly applying the open agriculture market model from there, We should focus on reforming our APMC system which might profit the small and marginal farmers primarily. A study done by Organisation for Economic Cooperation and Development in together with the Delhi-based think tank Indian Council for Research on International Economic Relations had shown that between 2000 and 2016-17, Indian farmers lost Rs 45 lakh crore.Can we imagine the immeasurable sufferings of the farmers in our country? If the loss of such gravity would be encountered by corporate, the entire nation would have been talking about it, but this was not discussed by the mainstream media at all.The economic survey of 2016 tells us that the average income of a farmer's family in 17 states of India (meaning half the country) is Rs. 20,000 p.a.This means 1,600 per month.

APMCs are also not superb for farmers but these open markets aren't going to be the one magical solution to all the problems of farmers. I in my opinion conclude that Farmer leaders are been fighting for something. If the corporates are going to set an identical precedent as they had in America, then it is a matter of concern for farmers, especially small and marginal landholdings.