Jungle Justice; The New Form Of Justice In Nigeria? 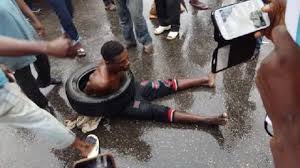 What you believe in doesn't amount to much unless it causes you to wake up from your dream and start working. Many Nigerians are asking; if jungle justice, they believed that the government frowns at, is the new form of justice generally accepted? Is jungle justice the new normal for Nigerians?

The society frowns at people taking the laws into their own hands, yet  with the recent happenings and assaults of the "One million boys" and "Awawa boys" in Lagos state and now spreading across Nigeria, one can't help but ask if the government has accepted jungle justice also known as mob lynching as the new form of justice.

It is an uphill task dealing with crimes in our fast-paced world. And the government pussyfooting style of governance has made perpetrators of these crimes thrive and bear fruits rapidly, especially when they fail to punish criminals for fear of persons, nepotism, and whatever reason they seem to have.

The British Broadcasting Corporation News defines jungle justice or mob justice as a form of public extrajudicial killings in Sub-Saharan African, most notably Nigeria and Cameroon, where an alleged criminal is humiliated, beaten,  or summarily executed by a crowd of vigilantes. Treatments can vary from a "muddy treatment", where the perceived perpetrator, is made to roll in mud for hours to severe beatings followed by necklacing.

It further stated that this form of street justice occurs were a dysfunctional and corrupt judiciary system and law enforcement have "lost all credibility. European principles of justice have likewise become discredited."

Notable examples include the Bakassi Boy and the Aluu Four Lynching.

Today, the act is widely accepted, by most of the masses and plunged into. The world is facing massive disrupt as a result of the outbreak of Covid19. The disrupts caused by jungle justice has left many financially unstable, hungry, tensed, agitated, dismayed, and in rage.

Research has shown that people are split up into two types when it comes to facing life’s challenges. The first category has intentions of easy success, a polished life that has few bumps and of quick achievements.

Growing and intellectual minds understand the need to face challenges for them to be refined. They know that challenges only makes them tougher and, reasonable. Challenges produce lessons for any next level. The decision to strive patiently or divert them is entirely up to us.

Needless as it may be, it’s clear that the first group is extremely vulnerable to life problems and challenges. The minute they fail, they speculate that something went wrong instead of understanding that success is all about trying things that don’t work until something that works, is found.

According to Ida B. Wells - "Our country's national crime is lynching. It is not the creature of an hour. The sudden outburst of uncontrolled fury, or the unspeakable brutality of an insane mob. "The first group of people as I earlier stated are the infamous Awawa boys and One million boys in Lagos. They are uncontrollably furious over the hunger and lockdown in the country, and carry out unspeakable brutality on their victims.

This infamous One Million Boys group, according to Alaska Gboyega, is created to fight injustice dealt out to the weak and helpless in society. The group started with twenty boys and later grew in number as it expanded to other states in the country. But all the good objectives of the group is changed now. They've become vulnerable to life challenges and problems.

They have a little threshold for patience and life challenges and have taken to the streets to steal from the masses who they either mar or kill in the process. It is only a mad man that goes to sleep with his roof on fire. Lagosians have taken their security into their hands. That notwithstanding, the big question; why do people engage in mob action and go scot-free is begging for an answer.

The government, law enforcement agents, are doing the best they can but, it's not enough. The people are growing weary waiting on them. But does that make jungle justice legal? No, it does not. But the big question; who will protect them and their properties from impeding dangers is yet to be answered.

While they wait for that answer, the people have decided to take the law into their hands and carry out justice on any criminal caught. Some of the justice they carry out is brutal and insane. Some unpleasant videos, can be seen trending online, as to how the criminals caught, are lynched and burned instantly.

According to Samson Ezea, a correspondent for Saturday Magazine, jungle justice is fast rising and becoming worrisome in the country and globally. Jungle justice puts any country on the edge, including Nigeria, and it seems unabated. Investigations by The Guardian showed that one of the major reasons for such action is the lack of confidence in the security and justice system.

We need to have respect for human life regardless of the situation we find ourselves in today. What we have in our world today is more humans with less humanity. The situation in the country, has become a deep concern for all, with all manner of brutalizing treatment meted out to Nigerians, by unethical persons.

As a people, nation, we need to drive against violations of human rights, and all manner of impunity, jungle justice, and mob lynching. We should report all incidents to the nearest appropriate authority. Failure to do this is acknowledging jungle justice as the new form of justice.

We also encourage all government law enforcement agencies to be all about in their duty of safeguarding the lives and properties of the people entrusted to them without fear, prejudices, favouritism, and nepotism. Law enforcement agents should respond promptly to the security needs of their citizens.