Kunal Kamra Strikes Against Threats : Has India Lost Its Humour? 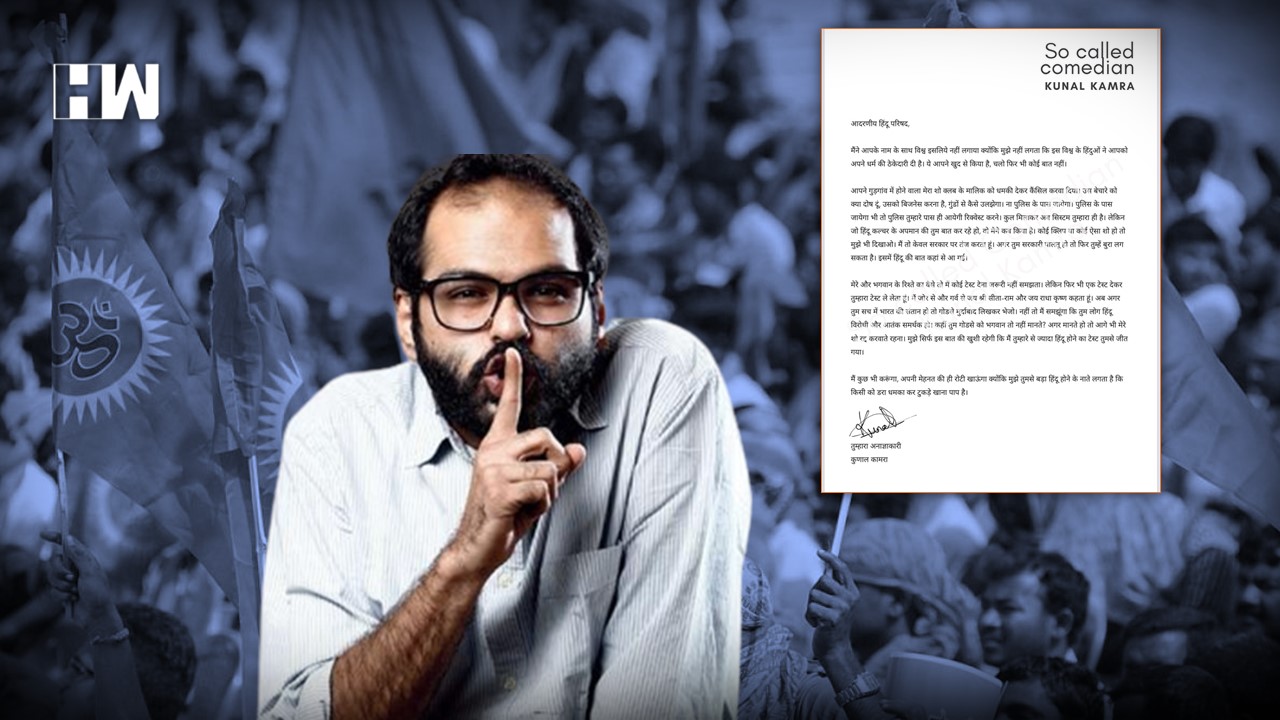 Kunal Kamra, an India-based stand-up comedian, tweeted a provocative statement in Devanagari script addressed to the Vishwa Hindu Parishad (VHP) on September 11th, after it threatened to have his scheduled shows canceled. The VHP is a right-wing Hindu organisation that has been active in India since 1964. It has had Kunal Kamra under the radar for a while, owing to his sharp political satires against the Hindu nationalist agenda and often unapologetic vileness.

The VHP, in collaboration with another extremist group, Bajrang Dal, had earlier submitted a complaint against the comedian to the Deputy Commissioner, citing that Kamra's allegedly distasteful puns intended against Hindu deities could incite violence in the region. Kamra was supposed to perform at Studio Xo bar in Gurugram on September 17 and 18.

Besides, this is not the first time Kamra has attracted trouble from an incensed system, nor has he only offended extremist parties. Earlier in 2020, he was served a notice by the Supreme Court of India with contempt of court allegations. This happened as, in one of his shows, he suggested that the highest court of law was the Brahmin community's puppet owned by the government. He had also posted a morphed image of the Supreme Court in saffron hues—the representative colour of the ruling party.

In a series of tweets, he used questionable language, expressing distrust against the court, abusing the Chief Justice of India, and asking lawyers to not use the prefix "Honourable" when referring to the Supreme Court, all in the garb of humour. Attacking a body known to the Indian public as the purveyor of justice was sure to cause major controversies.

Moreover, Kamra is not the only comedian who has run into legal pitfalls in the present decade. Munawar Iqbal Faruqui was arrested after his show in Indore for making fun of Hindu gods in one of his Youtube videos posted in April 2020. His Indore performance was cut short by public intruders, and he was charged with Section 295A, stating that he intended to insult religious belief systems. He was booked for four years in jail and received bail only after more than a month of serving a sentence when the Supreme Court found the FIR vague.

Later, Agrima Joshua faced wrath for cracking a joke involving Chhatrapati Shivaji Maharaj's 21-foot statue, commissioned by the government. The then Home Minister of Maharashtra asked the police to take relevant action against the comic. The Maharashtrian community was visibly angry on social media. Joshua had to release a public apology and take down her content.

In the wake of such incidents, Kamra's letter comes as an indictment of an extremist sentiment that can't take a joke. At the same time, it reflects his inability to empathise with a backdrop that intends to protect its belief systems. In the post, he challenges the VHP to find him any snippet that proves that the comedian is disrespectful towards the Hindu community as a whole. He also suggests that the Parishad self-proclaims to be a custodian of religion when it is actually terroristic in its motives to earn a living by intimidating comedians.

Despite the backlash received from systemic structures, Kunal Kamra has found support in the words of Mahua Moitra, a Trinamool Congress leader. She has called the response a "dare letter," praising the comedian for his courage. In the past, Tanmay Bhatt had also found some respite as Sonam Kapoor had defended the essence of comedy. Moreover, several names in the stand-up industry have suggested that comics in India have lost their freedom of speech.

As Frank Krutnik and Steve Neale have talked about in their book, comedy and humour depend heavily on disturbing decorum in the first place. It is the discomfort that is supposed to incite laughter. In India's case, however, the nature of the attacks on the "decorum" is constantly under supervision. Although many would ask the audience, "why so serious?" as anger escalates into legal proceedings, one should not forget that the country is representative of cultural diversity. The idea of offence traverses in different directions for different identities.

In that light, the debate around freedom of speech becomes a complicated arena, in my opinion. While comedy is not meant to be taken seriously, it cannot be completely free of constraints. It is becoming increasingly difficult to have everyone in the audience in on the joke. It is important to note that the endurance of the stand-up audience has evidently been perforated with anxieties about having their beliefs made the butt of jokes.

As Jason T. Peifer writes, humour can become an instrument to create, protect, and maintain power. Since it allows a comic to attack, undermine, judge, and criticize cultural realities, it needs certain ethical boundaries laid to sustain it as a social lubricant, not a social instigator. Having said that, to accuse India of losing its humour and have the comedy industry renounce any responsibility towards the Indian community is a hollow approach. Ethical accountability needs to be established.

Much to their dislike, stand-up artists find themselves in a position to either engage in squabbles with the system or re-think their approach to humor, adding a certain degree of carefulness. It must be challenging to achieve, as it would require a sincerity that comedy was never meant to endure. Consequently, it can be suggested that both the parties, the performers and the offended onlookers, need to meet halfway through to keep the industry of humour thriving in India and also protect sentimentalities. Only then would the tensions subside, allowing the diverse Indian community and the art form to preserve their sanity.