Latinx Music Appeals To Only One Type Of Love 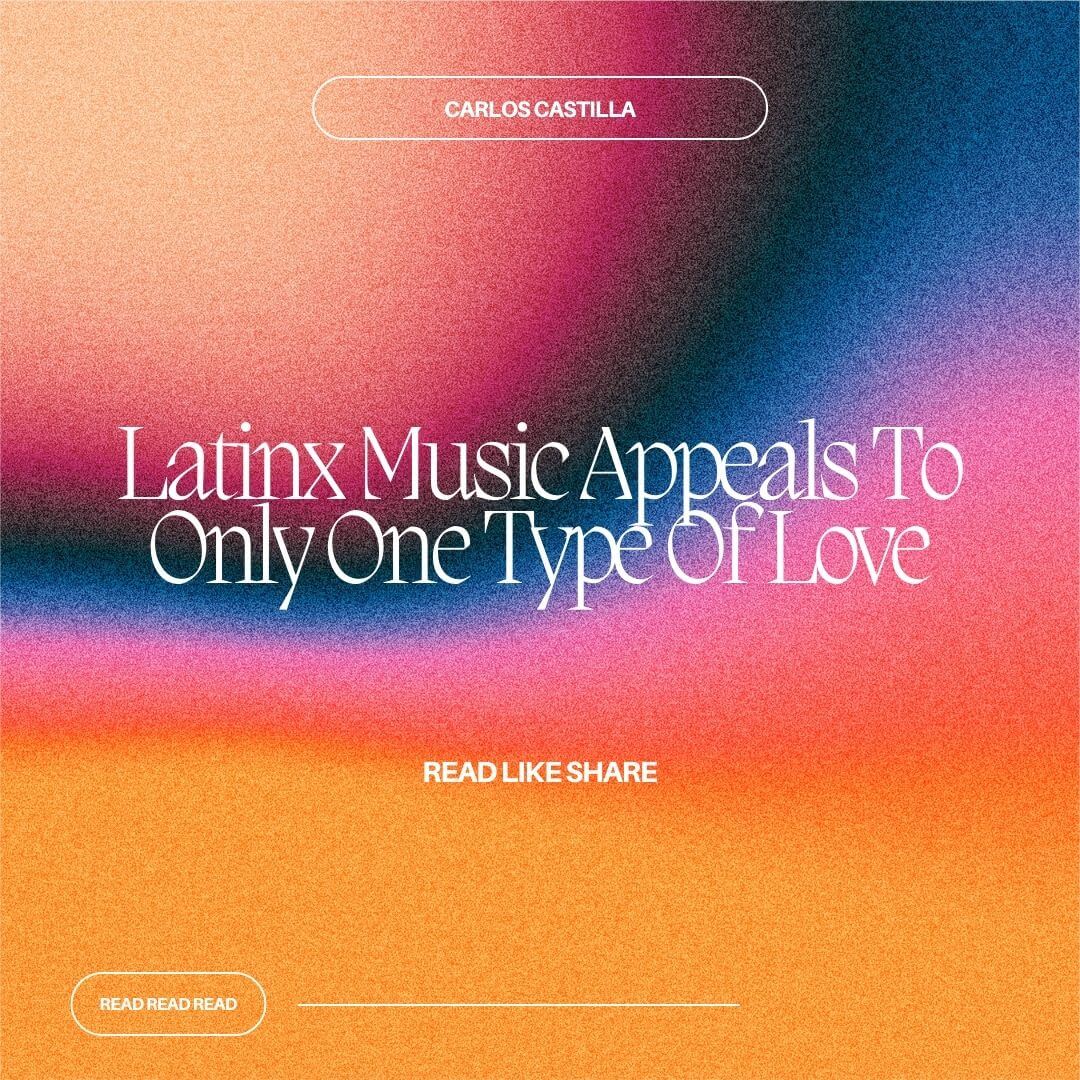 Latinx culture has historically preserved a clear boundary between the gender binary. This preservation manifests in gendered Latin music.

Spanish is one of the five Romance languages of the world, all of which use gendered markers in everyday communication. These markers easily transition in Latin music, emphasizing the boundary between man and woman.

The gendered markers are provocative and sexual. There is a sexual tension in the music that makes people want to pair up with someone and dance with them. It is a celebration of togetherness, fitting for the Latinx community because of how prioritized family and community are for Latinx people worldwide.

The issue is a group of Latinx people is left to reintegrate themselves into the music of their culture because the lyrics were not meant for them. These lyrics are meant for straight people, which excludes LGBTQIA+ Latinx folk.

There are different ways queer Latinx have found space in this music. An interesting one is the appropriation of lyrics and emotions targeted toward straight people.

Two people of the same sex are forced to hear a man sing about a woman or vice versa, so one way they appropriate these lyrics is by stepping into either their masculinity or femininity. The party that feels most comfortable is the feminine body singing the part of a woman and the masculine body singing the man's role. Although this example projects heteronormativity onto queer couples, it is a worthy example to talk about because it shows how much gender is essential in the music of the Latinx community. Gender is a tool used to make and enjoy music, leaving queer people out of the music. Changing gender roles by having a man encompass the feminine energy of a woman and having a woman contain the masculine energy of a man is revolutionary.

Some lyrics sometimes talk about a forbidden love or a love where both parties struggle to love each other; both examples resonate deeply with LGBTQIA+ Latinx folk. When Latinx artists sing about a love that causes them pain for whatever reason, it fits with the experiences of a queer person who cannot love openly because of queerphobia in their societies or atmospheres.

Openly loving one’s partner is a luxury not everyone has. A love that is strong and passionate, yet soft and intimate, is a love many people would die to feel. Love that is closeted and hidden away from the public and one’s personal life is an onerous burden for a couple to carry.

Finding love in forbidden places comes with secrets and shame because it is prohibited. Queer Latinx people know this is not the case. Their love is forbidden not because it is wrong but because of the ignorance, traditions, colonialism, and white supremacy surrounding and rooting queerphobia.

Despite these appropriations, it is also expected that some Latinx queer people would completely feel isolated from their culture. Music is a huge factor in the Latinx identity and knowing that the music was not created for oneself is scary. It is scary because of the overarching anti-queer sentiment lingering in the community brought by the unhealed traumas related to colonialism since one of the colonization’s consequences was queerphobia.

There is this hatred for the queer community because they are different; granted that over the years, it has progressively gotten better for queer Latinx people. Latin American countries have slowly legalized same-sex marriage, signifying that Latin countries are actively healing from colonialism. Hopefully, with the legal right of marriage, more queer Latinx people will see themselves represented in music as well.

Additionally, it has been established that Latin music is gendered, but so are the dances, which are consequences of heteronormativity.

The dances to Latin music usually have a leader (the man) and a follower (the woman). When one goes to Latinx celebrations, there will always be people partnered up and enjoying their time with the music and their dance partner. This is a staple in Latinx culture, which is reserved for heterosexuals. Very rarely are two men in love, or two women in love, dancing together. There might be two women who are friends dancing together, but two women who romantically love each other and are out and proud of their love are scarce.

Gendered music has consequences that spill into the dances of Latinx culture.

The use of gender and heteronormativity in Latinx music excludes LGBTQIA+ Latinx people from being able to enjoy and express themselves in music fully.

The End of All Things — Brendon Urie Announces Dissolution of Panic! At The Disco

Is Britney Spears being Photoshopped?