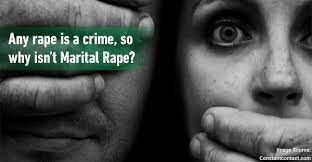 Despite the fact that the Indian Constitution provides equality to all people, Indian criminal law discriminates against women who have been raped by their own husbands. The Exception divides women into two sections based on their marital status and protects husbands. As a result, the Exception allows married women to be victimized solely because of their marital status, while unmarried women are protected from similar acts.

Exception 2 is also a violation of Article 21 of the Indian Constitution. Under Article 21 of the Constitution, the right to make sexual preferences fall entirely within the boundaries of personal liberty, privacy, dignity, and bodily integrity. In India, marital rape is a major issue. Domestic abuse hits around 70% of Indian women, according to the National Crime Records Bureau's (NCRB) "Crime in India" 2019 report.

It is permitted in India to rape a female if you are married to her. We are in the year 2021, and our country has reached this point of depravity. It's a real disgrace that marital rape is still not illegal in this country after all these years. People believe that incidences of marital rape will ruin the institution of marriage. This isn't correct.

The truth is that, rape leads to the dissolution of marriages. Millions of women are sexually abused by their spouses in the privacy of their own homes. Rape has the same repercussions whether a woman is married or single. Furthermore, because they are legally and financially bound to their spouses, married women may find it more difficult to leave violent situations at home. It advises a woman that once she marries, her body becomes her husband's property, and she loses her right, power, and autonomy over her body.

As observed in rape and domestic violence laws, a lack of means, access to legal support, and stigma all contribute to women not receiving justice under these laws. This loophole to the law encourages husbands to compel sexual intercourse with their wives, knowing that their actions will not be prohibited or punished by the law. The law must protect all women's bodily autonomy, regardless of their marital status. On a regular basis, thousands of men violate their wives' sexual consent based on this mindset. The perception that when a woman marries, she gives her husband perpetual, unrestricted sexual consent is profoundly rooted in our culture. As a result, women are stereotyped as "baby-making machines."

As a result, it is deemed that when a man forces intercourse on his wife, no crime is committed because she is in his control and ownership. Rape is rape, and rape is a crime in almost every country on the planet. Criminalizing marital rape, according to the current government, would "destabilize the institution of marriage" and might become a convenient tool for "harassing husbands."

Marriage between a man and a woman in this context implies that both parties have agreed to enter into a sexual relationship, and it cannot be otherwise. Lawmakers fail to recognize that a marriage is not a license for a husband to forcibly rape his wife without consequence. A married woman, like an unmarried woman, has the same power to control her own body. The law's and legal institutions' incapacity to cope with marital rape reveals the law's limitations.

According to the Indian government, individuals wanting to prevent women from being raped by their husbands were "blindly" adopting Western norms. Due to significant cultural and socioeconomic disparities, marital rape cannot be as effective in India as it is in the West. The government then claims that if marital rape is made illegal in such circumstances, the majority of marriages will fail.

How can the law overlook such a flagrant violation of a married woman's fundamental right to her body in order to protect her from abuse? It is due to the fundamental architecture of the marital institution that she keeps her independent status despite being married. But one thing is certain: rape is still rape, and consent is still consent. If a person has been raped, the rapist should surely be punished.

The time has come to make marital rape a crime. Marital rape cannot be considered implicit consent for the persons involved, and marriage does not entail lifelong consent for a woman. A "no" is a "no." Rape is rape, and marriage is no protection against it. It's past time for us to follow other countries' lead and recognize that marital rape is a crime. We also need to trust women not to abuse the system and teach men to respect their ladies!

Causes of rape cases and its prevention in India

Rape Crime: A Wake-up Call For Justice And Support For Victims Globally