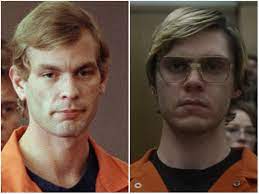 I’m sure everyone has heard about the Netflix miniseries “Monster: The Jeffrey Dahmer Story” by now. But, just in case you haven't, Evan Peters plays the role of a young Jeffrey Dahmer (yes, this is based on a true story), a serial killer who commits cannibalistic acts on the victims, he claims.

This limited series was created by Ryan Murphy and is slowly becoming one of the most popular and controversial series on Netflix. Although, it seems not everyone watched this series just for “the fun of it” or for interest. There have been numerous backlashes in the new series. However, Ryan Murphy (57) has debunked most of these comments and critiques.

Following criticism from some of the victims’ families, the Netflix series creator mentioned that they had reached out to 20 of the victims’ families and friends during the three-and-half years it took for the series, and “Not a single person responded to us.” Ryan Murphy also stated that Jeffrey Dahmer's victims deserve a memorial and that he would be “happy to pay for it.”

“It’s something that we researched for a long time,” says Murphy at an event for the show at the DGA Theater in Los Angeles. “And we, over the three- three and a half years when we were writing it, working on it- we reached out to 20, around 20, of the victim's family and friends trying to get their input, trying to talk to people. And not a single person responded to us in the process. So we relied heavily on our incredible group of researchers who- I don't know how they find much of this stuff. But it was just like a night and day effort to us trying to uncover the truth of these people.” However, there have also been a few comments from the families that were said to have disclosed that a lot of what was in the series, they say was just, “taken,” without any of the family's permission or consent.

The true story the series was based on and documented was a truly horrific incident based on one of the most notorious serial killers in US history.  Between 1978 and 1991, Jeffrey Dahmer gruesomely murdered 17 young men and boys, the youngest being a 14-year-old boy. The mini Netflix series exposes the crimes Dahmer had committed and is centered around the victims and their families and the now deceased Jeffrey Damer’s life and his family. According to the shows description, “Monster: The Jeffrey Dahmer Story is a series that exposes these unconscious crimes, centered around the underserved victims and their communities impacted by the systematic racism and institutional failures of the police that allowed one of America’s most notorious serial killers to continue his murderous spree in plain sight for over a decade.”

Despite the goal that the producers of this series stated, the show has been harshly criticized for the heavy focus on Damer’s horrific behavior and the framing of the victim’s stories. Rita Isbell, the sister of Errol Lindsey (a victim of Dahmer who was murdered at 19), criticized them for profiting off the tragic tale. Some of the other victim’s families, like Shirley Hughes, the mother of Tony Hughes, who Dahmer had also murdered after they had started a relationship, stated that the series dramatized her son’s story. Many people also believe that this series glamorizes Jeff and the murders. However, Murphy and Barclay said that the show was about showing the victims as more than just a statistic.

Jeffrey Dahmer’s father himself reportedly wants to sue Netflix about the shows of his son. According to reports, Lionel Dahmer, the father of Jeffrey Dahmer, the Milwaukee, Wisconsin serial killer, is upset that he was not consulted on the series and is worried about his and his family's safety. However, according to Mitra Ahouraian, an entertainment lawyer, the law does not support it and says, “The sentiment is that if you're going to tell my story, I would like to be involved in the telling of that story, and unfortunately the law does  not support that if something is in the public record.”

Yet, in a surprising turn of events, Netflix has announced that the series Dahmer would be renewed for two more seasons. Here are the details for Monster's renewal for Season 2 and Season 3, as per Netflix:

The future installments of Monster will tell the stories of other monstrous figures who have impacted society. Additionally, Netflix has ordered a second season of the Murphy, Brennan, and Eric Newman real-estate thriller, The Watcher.  Executive producers of season one also include Alexis Martin Woodall, Eric Kovtun, Bryan Unkeless, Paris Barclay, Naomi Watts, Ariel Schulman, Henry Joost, and Scoop Wasserstein.

As of November 1, DAHMER – Monster: The Jeffrey Dahmer Story has garnered over 934 million view hours and is on track to reach 1 billion in the coming weeks. It is the second most popular English TV season on Netflix.

"DAHMER – Monster: The Jeffrey Dahmer Story broke a Nielsen record as the seventh most viewed streaming program in the US in a single week and has held the top spot on Nielsen's weekly streaming chart for three consecutive weeks."

"Audiences can't take their eyes off Monster and The Watcher. The creative team of Ryan Murphy and Ian Brennan on Monster, along with Eric Newman on The Watcher, are masterful storytellers who captivated audiences worldwide. The back-to-back force of these two series is due to Ryan's distinct original voice, which created cultural sensations. We are thrilled to continue telling stories in the Monster and Watcher universes."