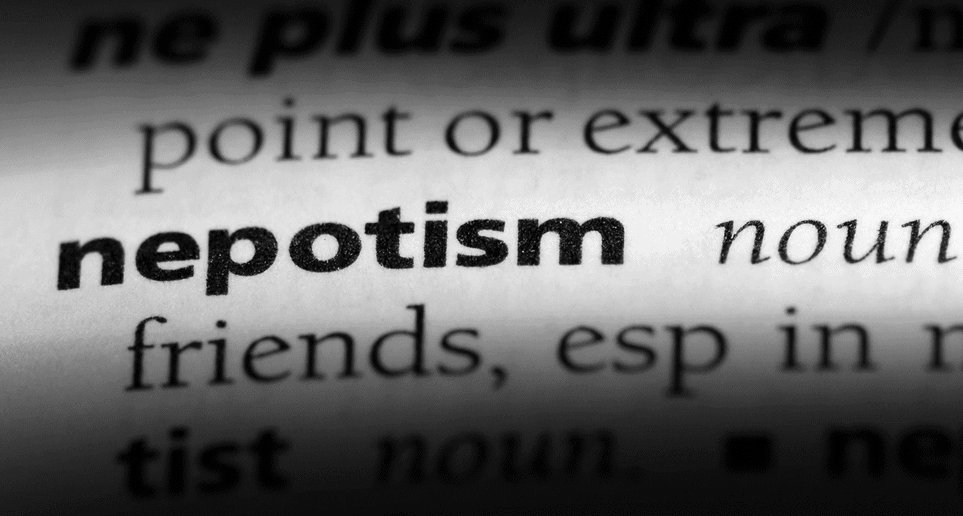 We all know that 'nepotism' is a sort of favouritism in which someone offers precedence to a friend or family member. Most of the time, nepotism crosses the line when someone utilizes his power or authority to give someone a job at work regardless of their qualities or credentials. Nepotism can be aggravating for those who witness it; it enrages those who are watching and makes them feel wrong.

Because nepotism is legal, it is difficult to avoid; nonetheless, businesses should start improving their nepotistic practices by establishing an anti-nepotism strategy to ensure that no future cases of nepotism occur.

Many a time Nepotism cases end up in controversial scandals. One such famous example is the father-to-son handover of the leadership, founded by the grandfather to the present company leader, Lee Jae-Yong, who gave out an official statement saying he would be the last of the leaders of the company who got the power due to Nepotistic practices.

On the other hand, most of the senior roles at companies with founding families, often known as family businesses, are occupied by family members, and their commitment to the company is considered a vital and extremely important competitive advantage. The primary argument in favour of all of this is that when families traditionally run businesses, they want to pass it down to the next generation and keep the profits at home, where they can be passed down only to relatives. However, favouritism harms non-family members who feel they are being judged for not being loyal, which affects the organization's trust and efficiency.

Nepotism is seen as the fastest-growing killer in the entertainment industry, be it Bollywood or Hollywood. The most serious issue of nepotism is that it excludes real talent and effort from the profession. It detracts from one's desire to be inventive. The Kapoor family is the best example in Bollywood; their entire family has worked in the entertainment industry, from Prithvi raj to Ranbir. In one of his interviews, Ranbir Kapoor admitted that coming into Bollywood was a blessing because of his familial links.

The recent Bollywood nepotism controversy involving Kangana Ranaut was nerve-wracking for many, but at some point, it went too far, and the star went on a warpath against the entire business. Last year, the 34-year-old actor was on a mission to bring down Bollywood's biggest personalities, accusing them of fostering nepotism. She chastised them for sabotaging countless careers by focusing on celebrity kids and ignoring true talent. The actress has stated that she was a victim of nepotism and that she faced numerous snares on her way to stardom, but that she overcame them all and now sees herself as a messiah who can help many others. Ranaut became engrossed in the campaign she had launched, and what had begun as an anti-nepotism campaign became a means for her to get revenge. As she continued to resurrect past disputes, she alternated between being the victim and the attacker. She slandered several actresses, making nasty remarks about them. Inconsistency, a lack of rationale, and dishonesty drowned out her conversations with time.

The movies that prove that 'Nepotism' is the darkest plague in Bollywood, for example, could be Sadak 2, SOTY, SOTY 2, Love Aaj Kal 2; many newcomers feel they missed out on the chance to do better. As many star kids try to dodge the bullet of nepotism, Sara Ali Khan said nepotism exists, so does the unfairness. She added by saying she wants to leave a mark in Bollywood and not just be known as Saif Ali Khan’s daughter.

The way individuals react to nepotism at work is primarily determined by the candidate's credentials and consciousness, as well as the recruiting process' openness, nepotism can be acceptable if the candidate who was recruited is as good as the other candidates in the race. However, Nepotism not only adds to the already pouring bag of corruption, but it plays a huge role in demotivating and discouraging a lot of individuals causing a hindrance to competition therefore we miss out on important innovations as creativity gets lost.

Favouritism and cronyism are difficult to prevent, according to studies, especially in high-end positional organizations with interpersonal relationships. India is currently at a melting point of variety, with not just an increase of nepotism but also casteism, but reservation is the only option to uplift the lower classes, who are constantly degraded by the upper classes. Reservation's entire objective is to combat the more nepotistic behaviour. Because it is not a development that affects every portion of the country, it causes resentment among other elements of society, particularly the upper echelon. As a result, the reserve is the only social inclusion policy designed to give individuals who have been forcefully discriminated against and pushed out of society the best possible representation.

Reservation was introduced as a cure to Nepotism, but recently we see it eating out the real talent, giving more opportunities to the reserved categories which cause many of the individuals who are not eligible for the reservation to lose on the same opportunity even if they were more deserving.

Nepotism will surely put India back by a hundred years, as it adds on to the heavy corruption activities, accumulation of power, and wealth capture, these actions are not good for any country, as it throws a greater amount of light on power and capital than the people of India, this surely does hamper the balanced functioning of Democracy.

The Dark Side Of Bollywood