Not Much to Take Pride on, in Hungary 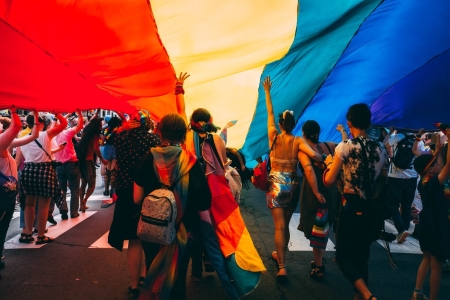 We need no introduction to the fact that June is in and with that, the entire world has painted itself rainbow to take pride in their own unique sexual identity. In other words, we have been celebrating our true gender identities which like the colours of a rainbow, are spread in a spectrum.

And in the month, when the LGBTQIA+ community rejoice and cherish their legacy, the most ironical news have broken from the country of Hungary. At times when pride parades have taken over the streets of major cities globally, the intersections of Budapest are raging with angry protesters calling out the government's homophobic move.

The Hungarian legislative has passed a law that outlaws the dissemination of information meant for students, predominantly children which is considered to promote homosexuality or gender change.

According to a government spokesperson, “There are contents which children under a certain age can misunderstand and which may have a detrimental effect on their development at the given age, or which children simply cannot process, and which could therefore confuse their developing moral values or their image of themselves or the world,”

After the adoption of this newly passed bill, huge reforms will be introduced in the current schooling curriculum of Hungary.

So apart from the textbooks which will end up getting censored, the law also dictates on who can even conduct the sex education classes in schools. Moreover, only individuals and organizations listed and hence, verified by the the official government registry, can conduct these classes.

The crux of the story is actually the unheard of regulation of and in worst case scenario, the banning kids' TV, which happen to feature gay characters or LGBTQI+ themes. In defiance of this ,Hungary’s largest broadcasters have called out the law for what it is, saying that it could put a major question mark on the showings of pop- culture's darlings like the ‘Harry Potter’ and even a classic show like ‘Friends’, as per reported by the Reuters.

Maiming the pop culture for the youth will not only isolate them but also make it harder for them to explore their own sexual identity they could've garnered organically from their environment and media. This orthodox setback will put the younger generation in dark about the gender spectrum and can instead, give rise to gender discrimination and hate crimes at worst.

However, the law doesn’t stop here for it also targets on banning organizations and companies which broadcast the LGBTQIA+ in a good light. The country with conservative people in power has been in news before for yet another ad campaign back in 2019, when several prominent ruling party, Fidesz’s members demanded for the boycotting of Coca Cola’s campaign featuring gay couples.

The legislation comes in play at a time when the country’s parliamentary elections are right around the corner to be held within a year. Hungary has had a history for such discriminatory and majoritarian laws under the belt of the conservative party in power, Fidesz helmed by the Prime Minister Viktor Orban. Veiled under the concern for “protection of children”, the unprecedented backlash the establishment is facing, might backfire Orban’s efforts to win back the trust of the country’s conservative Christians. The timing couldn’t have been wrong for the nation wide protests are just sprouting up thoroughly exasperated this time around.