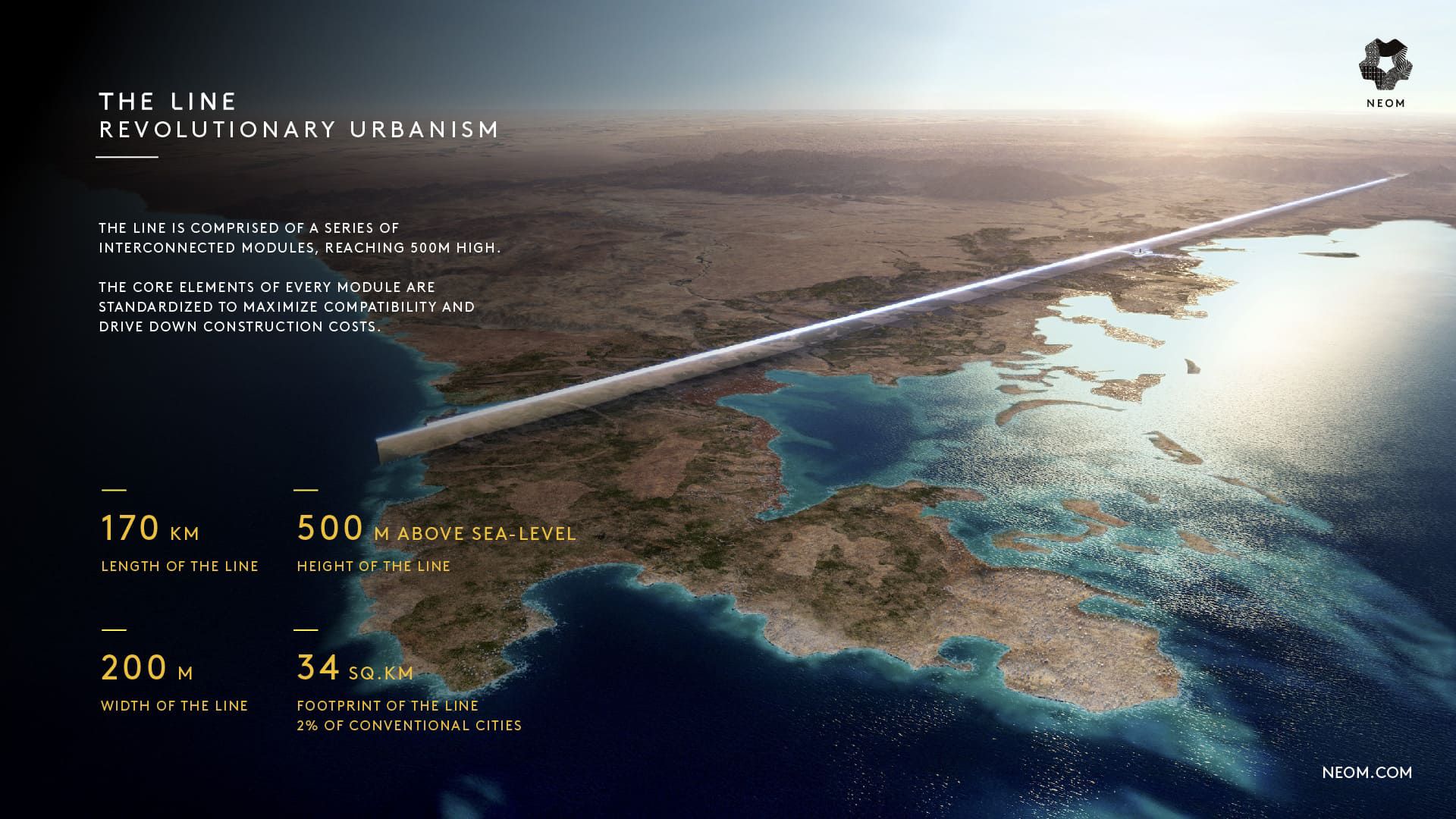 The plans for the megacity Crown Prince Mohammed bin Salman (MBS) has reportedly declared ‘his pyramids’ look stunningly dystopian and straight out of a sci-fi movie. The city, designed by US architecture studio Morphosis, will be roughly 500 metres tall and 170 Kilometres in length, not only will it be covered in mirrors (for reasons which will be revealed later on) but it will comprise two parallel buildings connected by walkways and divided into neighbourhoods.

The Line, part of project NEOM, has been more than talked about. It has been pushed to the advertising forefront with adverts for the proposed city sighted at world-class airports, banks, and high-class magazines both online and physical. All this, and the fact that Crown Prince MBS has reportedly budgeted $500 billion for the project, indicates that ‘The Line’ is not going to remain a plan or pipe dream for much longer.

Although potentially, a great achievement for not only The Crown Prince’s reign but humanity’s progression, this write-up will critically analyse the effects that NEOM has and could bring on not only past and future inhabitants of the land, but the local environment and at large, the country. This piece will also reveal that despite the scale, projects like The Line aren’t new, but are becoming increasingly more harmful to the environment and the working class.

Before the critical analysis, however, the project must be recognised as a feat. The structure, which is 50 metres taller than the Empire State Building, will house nine million people- a step forward in tackling the housing crisis in Saudi Arabia. What will set it apart from other cities, however, is the proposed marriage between urbanism and environmentalism. It is, therefore, no surprise that in addition to multiple green spaces and community farms the city will reportedly incorporate a ban on cars as an underground high-speed rail network will transport its residents.

In DesignBoom’s exclusive interview with NEOM’s director of Urban Planning Tarek Qaddumi, more about the design, life within the city and its operations are revealed. Besides Renewable energy from the sun and wind, another con of The Line is its vertical organisation, because of it the city will have a reduced effect on the land surrounding it, limiting the invasive and harmful nature of urbanisation on natural ecologies and Saudi’s Landscape.

The mirrored walls, which are a glass facade provide light passages, something that Tarek and his team paid critical attention to. Natural light will no doubt combat the light pollution that Urban areas are highly prone to.Lastly, the project will significantly boost the already booming economy of Saudi Arabia, increasing jobs not just in the housing sector, but all around as the city will need schools, public transportation, shopping centres e.t.c.

However, in the following paragraphs the proposed project will not be revealed to be something better left as a small scale development, or more harshly, in the drafts as its completion may do more harm than good.

The first issue concerning The Line is the displacement of roughly 20,000 Huwaitat natives who state that the land is their ‘ancestral land’.  A member of the native Huwaitat tribe alerted the global public to Saudi security forces trying to forcibly remove them from their homeland in the northwest region of the country in 2020. This member of the tribe, who predicted their demise for resisting the eviction was later killed by Saudi forces. The cousins of the unfortunate victim were later arrested. An international member of the tribe who helped raise awareness has been threatened to ensure her silence. Alya Abutayah Alhwaiti told BBC she received threats not only via phone calls but social media as well, threats that hint at her fate ending similar to Kamal Khashoggi, a journalist who was murdered in the Saudi consulate in Istanbul in 2018.

Upon further investigation, it was discovered that the Huwaitat people were actually willing to move and had even been promised to receive compensation, but distrust of government officials has resulted in their resistance. Officials of the project have restrained from commenting.

The issue of displacement links to housing, which begs the question of what is being done about the housing crisis in Saudi Arabia. It could be argued, that this new city will be home to 9 million people, however, in a published paper on the housing challenge in Saudi Arabia by Ali Alqahtany and Ameen Bin Mohanna, it was discovered that the leading obstacle to adequate housing was the high cost of land followed by the low income of families. It is no secret that plenty is being invested into NEOM, and the investors would expect their returns, it is therefore out of the question that low-income families will have a place in The Line. When analysing methods under MBS’s regime, signs point to the fact that thought has been put into how to make houses for the growing population of Saudi Arabia. However, the plans to build 1 million houses with an investment of over $100 billion attest to the fact that more attention is being paid to NEOM, perhaps due to the investors involved in the project, who want to see speedy return.

The generous real estate development fund given by the housing ministry, is met with harsh reality. The promise of interest free loans to buy state-backed houses for cheap is nowhere in sight for Saudi nationals as some have been on the waiting list for over 5 years. Of the $500 billion to be spent on The Line, a part of the money will be from the state, tax money, of people who are already struggling to make a living amidst the dip in the economy due to a downturn in the oil market. Perhaps Alia stating that the city will be ‘built on our blood’ is a sentiment not only shared by the Huwaitat tribe but by the working class.

The claims of sustainability within The Line have long been under fire, with the head of built environment at the University of New South Wales, Philip Oldfield boldly stating that the carbon costs of construction would “overwhelm any environmental benefits”. Many environmental benefits have been promised- dependency on renewable energy, the balance of natural and artificial light and plenty of green space. However, as Oldfield warned, the carbon impact of the project would be staggering, experts say that the main building materials would be glass, concrete and steel, which are not sustainable building options that, paired up with the magnitude of the project Oldfield estimates 1.8 billion tonnes of carbon dioxide will be produced.

The same argument that goes for the housing crises applies to the issue of water shortage; neither funds nor experts have been allocated to look into the water crises, which is even recognised by Ali Shihabi, a member of the NEOM advisory board who stated “Saudi Arabia needs some creative thinking because the Middle East is running out of water”

Half the water is produced through desalination plants which remove the salt content from water, that is powered by fossil fuels and dispose of harmful toxins into the sea.

Although 97% of Saudis have access to potable water, it does not take away from the fact that Saudi Arabia is still one of the most water-scarce nations with their water scarcity level a staggering 410.5 cubic metres beneath the standard of 500. The problem causing water scarcity is overconsumption, which a considerably stagnant 2019 project ‘Qatrah’ by the Ministry of Environment, Water and Agriculture was meant to solve, so far, the effects of the project are not noticeable.

It is arguable that the international corporation Suez, dedicated to sustainable management of resources, has done more for access to water than the government. The corporation is behind the 98% water supply by desalination plants and the employment of 1,400 locals.

Despite the promises that NEOM’s desalination process will be powered by renewable energy instead of fossil, the outcome is unlikely because a 2020 report stated that out of the 365.16 TWh, only 0.02% came from solar power, to add to the unreliability of the promise, desalination plants have never been successfully powered by renewable energy further entrenching NEOM as ‘an experimental project’ with promises that need to be taken with a spoon of salt.

Expertise is not needed to deduce that The Line and by extension NEOM would require an immense labour force not only to build but to keep running. Past and recent developments of the project indicate an issue Saudi Arabian local workers have known for years- when it comes to employment firms are more eager to employ foreign migrant workers than the locals. Evident in the high levels of unemployment faced by Saudi nationals in the past decade. The ministry of labour highlighted that competition from -paid foreign workers and the lack of training that Saudi nationals have.

An analysis of the sectoral employment in Saudi Arabia by Hasanov and Alabdullah et al notes that Saudi nationals have high employment in primary sectors whilst tertiary and quaternary roles are filled up by Non-Saudis. It is clear that in NEOM, Saudi nationals will become second-class workers, systematically only being used for menial jobs whilst their foreign counterparts have higher-paid jobs.

An underlying issue that weaves throughout the entirety of the NEOM Project, is the capitalistic agenda. Although supporters of large projects like NEOM claim to ‘boost the economy’ and ‘encourage development’, in this case, architectural, mechanical and agricultural, it does so with a crippling effect on the working class. NEOM, despite a sustainable gloss, could be substituted for other intensive structures or schemes in other countries and the effects will remain parallel. Reportedly, the first building that came to completion within the NEOM project was a cluster of mansions for the Crown Prince followed by another luxurious cluster of buildings for the migrant staff.

All around, openly in the global south, and with more taste and finesse in the global north, elephant projects are being used to siphon government funds, promising minimal betterment but causing more harm than good. The only people that will readily and quickly enjoy the benefits of such projects are the investors and those who proposed them. It is not enough to boast that more ‘primary’ jobs have been created if the workers remain unable to make a living- buy a house, take their children to school e.t.c. What is needed is more high-paying jobs, that won’t go into the hands of foreign nationals, or worse, close relatives of people in power. What is needed by the people are results of plans that have long since been enacted that they have lost faith in. The plans for NEOM, like its other international counterparts, boast of ‘a better tomorrow’ and steering the country in ‘a new direction’ but neither seem promises for the ancestral tribe of Huwaitat and  Saudi Nationals, who are pushed under the rug of ‘yesterday’.

A Look At Cobalt: Sustainability VS. Problem-Switching

Poverty is Not an Inevitable Outcome of Capitalism