One nation, One people, One Price Tag 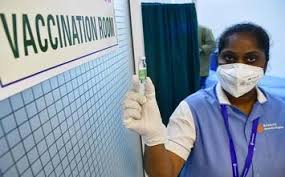 The boiling vaccine crisis has now become a constitutional crisis

There are two types of democratic settings in the world when it encounters a crisis. One, who always keeps the crisis at the top priority and makes uncountable amends to curb the rifting from damages. And the second one is the ones who have excuses filled to the brim on their plates, with no intention or thought or vision to face the crisis, let alone solve one and opening their wide, foggy eyes the very moment when the crisis has aggravated and is biting core sectors from its feeble, dysfunctional infrastructure. The foreseeable sight of logic they lack in tremendous amounts is astoundingly despicable and is an imponderable, to the heavy heavyweight on minds. And unfortunately, our beloved country is exclusively reserved to brand itself in the latter category.

The vaccination drive, ever since introduced in the country, was enormously criticized for its rapid nature of landing and supplying throughout the Indian markets, and one mistake after the another, led to the downfall of the mismanagement domino to hastily put the pandemic behind. The consequences do-follow, adding the accountability of the government's poor response to the pandemic and case surges and follow up diseases putting the public in one serious question, where is the plan for all this? The government skipped certain steps to be the first-line to conduct a massive vaccination drive, and also to explains a thorough list of reasons how the drive is dispersing falters one by one, sequentially bringing the house of the party in terrible books. Getting vaccinated in the global vaccination drive-in the fatal pandemic is a birth-right for a citizen of the country, at the price affordable by everyone. That freedom, however, is diminishing and losing its space for legitimacy.

At the Supreme Court’s call for the vaccination scheme being an absolute Magic 8 ball phenomenon, the real conversation that is about to erupt is what does the government plan to do about it? Thankfully, the stocks of the vaccines are increasing and the caseload is observing an unsteady decline, only time will tell when will the outbreak to a controlled situation. The scrutiny from the top establishment of the judiciary system comes because of the pricing disparity among the age groups of the receiving ends. The COVID-19 outbreak has been over 16 months old, and so have we witnessing its terror and its maintained decorum of merciless attack on countless lungs, taking away lives that could be easily counted on the fingertips. The vaccination drive when launched in December made a promise to vaccinate every person on every corner of the country free of cost. It wasn't a painful walk on the glass to kick-start the vaccination with the older lot aged from 65 years and above, as that was the first wave was mostly about.

Holding high obsequies for the older lot and depicting a primary success on the vaccine strategy, the first two phases of the vaccination drive passed through the vaccinates and critics without a noise, giving a green pass on the candidate's co-morbidity and allergic issues. Except for, people complaining about vaccination being ineffective on some, despite on promised efficacy in its trials. The vaccines fell scarce because of the excessive wastage of the doses, and hospitals started putting up 'No vaccines' boards waiting for vaccine doses to replenish by begging alms at the international doors, and not when the offer was initiated by the foreign pharma giants. Big names 'Pfizer''Moderna''Johnson and Johnson' were put on hold to procure Sputnik V from Russia. The vaccination crisis at the global level put the Center is a perfect opportunity to supply more and more vaccines throughout the country and in other countries.

This still doesn't explain how and why did the vaccination policy convulse to the 18-44 age ground and extorting exorbitant money from them, which is unfair. The Center promises to make vaccinations available in an abundant amount between August and December, but changing the dose intervals right when there is a vaccine crisis immediately implicates a lapse in the vaccination campaign planning. The PM Care fund, an asset of a diversion for the public interests, which invited millions of people to contribute to people battling with the outbreak, now also falls under the question of the efficacy of its own. The heavy amplification of the revenue generated from the PM care fund and the buckets of budget poured in the vaccination campaign and import in the annual budget announcement of 2021-22, becomes the SC panel big reason to irk on the assorted prices on the vaccines for the age the group while the immunization policy promised a uniform price for all age groups. The only people from the age group that can get vaccinated are the urban elitists and easy, unlimited internet access, both deprived in the rural areas.

There are many dire families and communities, who haven't been diagnosed and given treatment or given door-to-door service, don't have appropriate space to have quarantined, don't have access to technology and no awareness of the nearest vaccination centre, and severely crunched on finances to afford a vaccine dose worth over Rs. 1000. Vaccine doses being sold at prices of gold to the age group which was and still is at the epicentre of the devastating second wave, and the tsunami of job losses in the past year create no justice to make the age group pay. The vaccine road map was so vague, it created a ripple of hesitation among the candidates in the first place, and enforced the country into believing we defeated the pandemic. When the government was liable to lift the charges for the entire campaign, they must keep the prices fair and equal for everyone across states and cities, no matter their age, gender, income rates, backgrounds, caste, ethnicity and beliefs. There is one pandemic, one virus, one range of symptoms and a whole world fighting for it. It would be of absolute blunder if we start putting boundaries and unruly inconveniences on the shots of hope which is equivalent to every human being, equally deserving for the health care, we all need to be immune to.