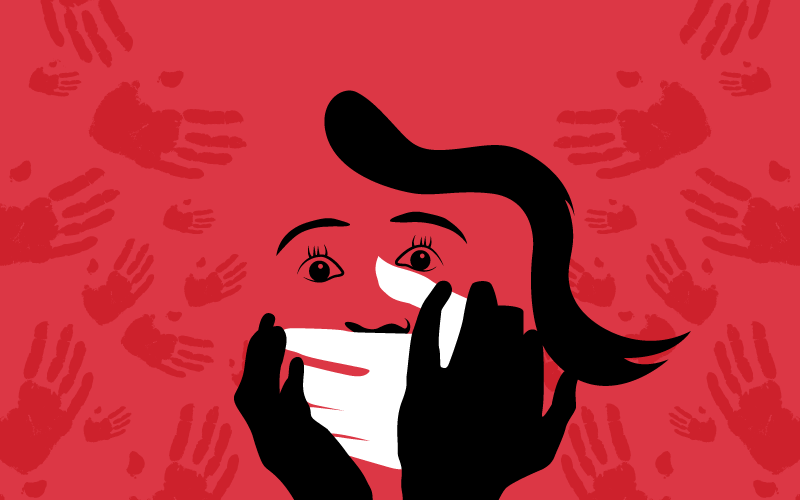 We do not want to use the term ‘harassment’. What is happening today is sexual harassment.

There is something very different about sexual harassment in the way, we think, which is a good thing looking at how it works. When there is an element of attack, it makes us suspicious. The locution “sexual harassment” is widely a contradiction. The majority count of sexual bullying presuppose disrespect and certainly not romance. There are the juncture come-ons: the unwanted sexual advantages, nudge touches, or bribes and threats used to brown-beat sexual activity. Sporadically, the assaults are sexually demeaning and crude. In another instant, they are contemporary without any sexual content. Women are likely to experience the bloom-up terrorism of harassment and bullying deployed in series of race and gender stereotypes.

When the nation is suffering from the biggest bungling crisis since the last definite years, the terrorist without armor/firearms are making coerce, ‘terrorism of sexual harassment in the nation. The knock of sexual bullying has a turn of school students to break their silence and call out the trauma they face in educational institutions that are supposed to nurture them. The ignorance of this sexual bullying can lead to hell towards the confidence booster of these sexual terrorists.

The very fresh breaking is reported from Chennai, Sushil Hari International Residential School. Whose institutor Shiva Shankar Baba, a whited sepulcher spiritual from Alangayam, North Arcot (Vellor District) is accused of sexual bullying on a tutee of his school. He calls himself a believer of Balamurgan Swami of Ratnagiri temple. The quirk in the story comes up when Baba Shiva went on a Pilgrimage Yatra to Dehradun (Uttarakhand) and got suffered a heart attack, midnight on June, 8. The Baba’s condition contemptible high as he has plump up for heart surgery.

Chennai was full of 'Me Too' charges this past week after several teachers were called in, for sexually harassing students. The complaints began to escalate after students received support from former alumni members and became famous Chennai residents. Last week, Chennai was silenced by allegations of sexual harassment after the accused were called to social media, and it all started with one school. Last week, teachers from at least five schools in Chennai were arrested or suspended following allegations of sexual harassment. A teacher from Chennai’s PSBB School was arrested after students spoke about their sexual harassment.

The teacher allegedly came to the online classes with a towel and sent inappropriate pictures to them. Students from another school, Maharishi Vidya Mandir, also spoke of their abuse. The story finds similar sexual harassment, physical embarrassment, and threats of failing exams when they speak ill of him. The school suspended the teacher but, no legal action has been taken so far.

As many incidents of child sexual abuse at school occur after the arrest of a 12th-grade teacher in Chennai, the Centre for the Prevention and Healing of Child Sexual Abuse (CPHCSA), talks about how schools can use a firm approach to prevent and deal with such incidents.

Q. What is the first step that schools should take to ensure safety from child sexual abuse?

Schools should understand that when they have a bully at school, they do not show it. The school's response to bullying is what matters. A safe school accepts that sexual harassment can happen anywhere including, their campus. Many child molesters are perpetrators who will choose a career that will give them access to students. But a safe school has a protective mechanism to ensure that bullying does not happen at all and when and when it does occur, schools must establish their transparency and firm response to it.

Q. Who should handle complaints of sexual harassment at school? And what methods need to be built to address them?

It is noteworthy that worldwide less than 15 percent of children and young adults report ongoing abuse. All schools should provide a natural environment where students can talk about anything that worries them. They should have a child protection committee with unusual members; at least half of the members, are women, an external member from an NGO, management representative, teaching staff, non-teaching staff, and possibly a parent.

Parents can decide to report abuse to the police, but the school must have a way to deal with the abuse. Schools should also ensure that students are familiar with the committee and know how to reach its members. When working with children and the elderly, the program should be empowering.

Q. If a child is sexually abused, how should a teacher or parent report the incident to school authorities? Especially when schools are discouraged or reject written complaints?

Teachers and parents can file a written complaint and sign a reconsideration to obtain evidence to report sexual harassment. If the school refuses to accept the complaint parents, should report it to the police. If they do not want to go to the police immediately, they must write a letter to the learning institution and complain with the District Child Protection Officer. Also to the Chief Education Officer and the Director of School Education. Previous steps by the government in this regard should be revived and implemented.

Q. What are some ways schools can prevent sexual harassment in schools?

Among the many ways, applicants to a school should be asked to complete a customized application based on questions that are relevant to the organization instead of simply receiving a CV or biodata. Use quantitative dialogue and ask questions based on the context of how they will deal with real situations. Examples: As a teacher, what would you do if a student liked you and sent you notes? How do you report anxiety, and to whom?

Next, schools should regularly check the background and reference with the previous employer and find out why the teacher has resigned. I have seen many abusers being fired only to work in another school for a few months. The government needs to come up with procedures to be followed by those with a history of abuse.

Q. Once hired, how does the school train teachers for child protection?

All staff, including non-teachers at the school, should be trained for 6-7 core hours on child protection, law, and reporting. This training can be done online, given how the technology has progressed. The module should be updated, annually to address new issues that occur during online classes. B. Ed training should also enhance training in students' mental and emotional development.

Protests by a Member of Parliament after Christian weds Hindu, and police say marriage is 'illegal.'