Paul Simon’s “You Can Call Me Al” 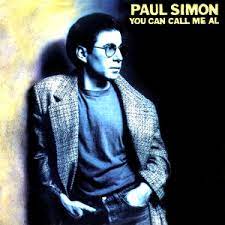 “You Can Call Me Al” by Paul Simon is a song about aging people questioning their life and trying to find meaning and purpose in their life. This song is meant to be autobiographical by referring to the “man” as Paul Simon. According to Simon, the lyrics went from a generic portrait-like perspective to a personal and autobiographical one. Many see it as a journey of a man’s midlife crisis into finding himself again by going on an adventure to a foreign land. In the beginning, Paul Simon tells a story about a man (himself) having a midlife crisis. He speaks about the insecurities of this man, who finds his body unattractive and undesirable by describing it as “soft in the middle". He refers to himself as Mr. Beerbelly, and having a larger waistline is an undesirable trait that is developed later in life.

The man in the song feels defeated in this world of difficulties and has no idea what to do. Simon describes this with the lyrics, “The rest of my life is so hard”. He even indicates being picked on when he says “Get these mutts away from me” and “You know, I don’t find this stuff amusing anymore”. It suggests that people, or possibly the media and tabloids at the time, found amusement in his appearance or awkwardness in social situations.

The chorus is a repetitive proposition from the speaker to someone else, presumably a friend, stating to “be my bodyguard”. He needs a friend or a “bodyguard” to protect him from life and the people who have been belittling him. Simon needs someone to protect him from himself due to his lack of self-confidence. He continues to mock himself and is exhausted in his life into the second verse.

Simon seems to be questioning his decaying mind when singing “Why am I short of attention?” His mind is becoming distracted and lacking the focus of his younger mind. As for the meaning of “call you Betty” and “You can call me Al”, I had to do some outside research to understand the context. According to Simon’s friend, Billy Collins, a French composer called Paul Simon “Al” and his then-wife Peggy Harper “Betty”. Those names were used as an inside joke between the two of them. This leads me to believe that this song was written to her before they divorced or at least referencing the comfort she brought to him when they were married. Peggy would have been the “bodyguard” and she would be called “Betty” as their playful joke.

Simon is on a journey to find himself by going to a foreign land. He contrasts the first two verses by saying the man is walking a “street in a strange world” instead of “walks down a street”. He also states that he is in “the third world” and that he “Doesn’t speak the language”. Simon is referencing himself leaving the U.S. to record his album, Graceland, in South Africa in 1985. Paul Simon has found a new sense of meaning and sound in South Africa by interacting with South African artists and people. He is a tourist with a wide eye who experiences new sounds and sights. Simon described the man as “surrounded by the sound, sound” and “He looks around, around” when exploring South Africa. This could be why this song was chosen as a lead single of Graceland. “You Can Call Me Al” is the beginning of a new chapter of his life and music era.

Despite the self-loathing lyrics, in the beginning, the music has an upbeat, joyous vibe to it. Throughout the track, you can hear South African music and the artists playing their instruments along with Simon’s lyrics. With the blend of different South-African instruments, like horns, bass, drums, etc., the music added much-needed energy to the story of the “man”. As the song progresses, more instruments are added to convey a more upbeat feel to the song. In the outro, the instruments (especially the horns) are emphasized to show the triumph of Simon who started as a self-conscious and insecure and then transformed into a confident, worldly man.

It is difficult to determine whether Paul Simon’s intentions with “You Can Call Me Al” and Graceland is supposed to appreciate or appropriate the South African culture. Simon has an appreciation for South African music by dedicating a whole album to it. However, as stated previously, the lyrics reflect a man, presumably an American man, trying to find purpose in his life. Also, as with all of Graceland, several South African artists are playing their instruments. The lyrics don’t represent the South African people or their experiences, instead, it represents the experiences of an American man traveling through Africa. He uses the lyrics, “Maybe it’s the third world, He is a foreign man”. Additionally, the “You Can Call Me Al” music video brings up the same problem of appreciation vs. appropriation. It is a very simple music video with Simon and Chevy Chase lip-syncing to the song and playing instruments throughout. There is no representation of the South African artists who worked on this song in the video.

Even with all the criticisms, Simon has stated Graceland is supposed to be the complete “opposite from what the apartheid regime said, which is that one group of people were inferiors or superiors, just an acknowledgment of everybody’s work as a musician”. Simon doesn’t want to focus on corrupt politics and wants to create great music and collaborations with people around the world.