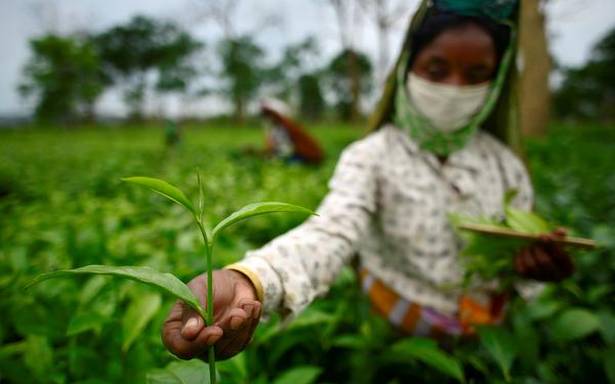 When you see the tea gardens of Assam, So you can't stop yourself from saying that how beautiful they are. Those tea gardens are like gold for Assam and India. We may have drunk that tea somewhere, but perhaps due to its taste, we cannot pay attention to the labourers who transport it to us.

Yesterday, I saw the news that Tea plantation labourers in Assam earn 167 rupees per day. And when I was watching this news, I was drinking a milkshake of a famous brand, and its price was equal to their daily wages. I was in shock.

How are those people living?

According to Wikipedia, there are 799 tea estates and more than 1 lakh smaller gardens. The total population is estimated to be around 6.5 million, of which an estimated 4 million reside in residential quarters built inside tea estates spread across tea growing regions of Assam. Another 2.5 million reside in the nearby villages spread across those tea growing regions, and Assam's population is 3.09 crore. So, tea workers constitute approximately 21% of the population of Assam. Even after having such a large chunk of the population in the state, nobody listened to their voices. They simply become puppets of managers. The managers will tell them when they have to sleep, wake up, urinate, eat, etc. They even do not spare mothers and elders. Most of the newly married women are underage who are working in tea gardens. They are too immature to handle marriage. That's why they become mothers too soon. They are living in such a bad condition that the feeding time of their children is also fixed.

In the gardens, all the milk comes out of their chests while using a sickle, and when the feeding time comes, there is no milk left in their chests to feed their children. Exploitation and sexual harassment are also common among tea garden labourers from managers and other higher authorities. Domestic violence and early/multiple marriages are also common among them. Tuberculosis, anaemia and other diseases are common among labourers. Nearly 80% of children under the age of 5 are underweight, and most women are anaemic because of malnutrition. There is also a problem of thinness and hypertension among labourers because of workload. Such conditions have led to very high maternal and infant mortality rates in the plantations.

Every party uses them as their vote banks

The managers of the gardens also take away from them their right to vote of their own free will. Everyone has to vote for that party which the manager wants. Even after doing so much, they are not even given the necessary facilities like a clean toilet, proper sanitation and clean water.

During the COVID-19 pandemic Lockdown, free food was distributed everywhere, but inflation also increased. Reach of ration cards grew, many people also benefited, but the condition of tea garden workers of Assam worsened. Ration cards of many labourers were made, but they did not get dietary supplements like others get. Some people got little, and the rest of the goods were either sold by the managers at high prices or taken to their homes for emergency use without even taking permission of 'Real Ration Card Holder.' The work of those people was also stopped. So, the wages they earned during regular days were also stopped, or they were rewarded with the deducted amount by ignoring their hard work. Despite the complete Lockdown, tea plantation workers continued to work at some places as it was the peak plucking season. If any of them got a corona-like illness and it started spreading, then it would be difficult to rectify the situation because they don't have proper health infrastructure, proper quarantine facilities, proper availability of testing, and treatment.

There are also about 65 lakh people in Assam who are originally residents of North India. These tribal people who work in the tea garden live in different parts of Assam and are also voters here. Not only Adivasis but there are other people here who are originally from North India but have been living in Assam for years. But many of them are still deprived of social and economic rights because all these people live with various problems. Over 90% of the tea workers are either scheduled tribes or scheduled castes, ethnicity, class and resource hierarchy. They used to face racism because of their caste, appearance and mainly because of their non-Assamese identity, and this racism sometimes turns into violence as well. It increases significantly since illegal Bengali migrants have increased their presence in Assam.

"All above mentioned problems are directly or indiretly related to illiteracy problem among tea garden labourers. Most of them are illiterate that's why they do not know their own rights. If those people were well-educated, managers and system might not be able to exploit them. Perhaps women would have been able to raise their voices against early marriage, early pregnancy, polygamy and domestic violence. Perhaps those people could not be affected with malnutrition then because then they would have known which nutrient they needed more. Perhaps those people are not even victims of racism because if they were educated, perhaps they would also have a leader who would raise their voices in Parliament."

A bully is now becoming a monster