Pride: The Meaning As Told Through NYC Pride 2022 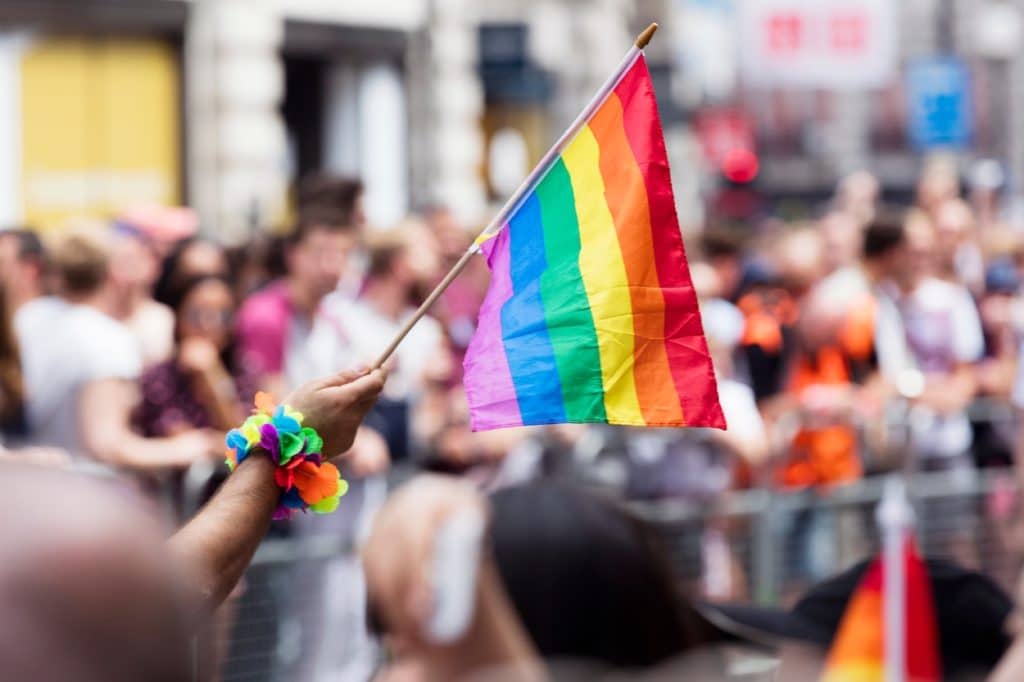 On June 26th, 2022, the streets of New York City transformed into an abyss of rainbows and glitter. Hundreds of thousands of people gathered in the big apple to celebrate the 2022 Gay Pride Parade. The celebration lasted from 12 pm to 5 pm and was an entire day filled with love. All ages, races, and identities could be seen around the city, laughing and smiling with one another. From men in their 80s to children less than six years old, all of these people came together to celebrate Gay Pride 2022.

After almost two years of zoom class, zoom work, and even zoom festivals, people were eager to rekindle with one another at pride. People could be all around the city, from lounging in Washington Square Park, watching or walking in the parade, or eating at one of the many restaurants down the road. Events like Pride Island, a musical festival, and PrideFest, an event with vendors all around the city, lured the public in.

The NYC community came together to celebrate this non-profit event. In the midst of the celebration, I got the chance to interview some of the pride attendees and find out what pride means to them.

Pride, according to Merriam-Webster Dictionary, means “The quality or state of being proud”. However, to those attending pride, as well as most members of the LGBTQ+ community, this word takes on a much stronger and deeper meaning.

Arianna Baracalli, an LGBTQ+ ally, and New York City local, explained pride as being a “lifestyle, filled with love and happiness and accepting people as they are.” Arianna explains that her view of the word pride doesn’t just belong to one group of people. No matter their sexual orientation, their race, pride is limitless. Being Arianna’s first NYC pride, she spoke about how the entire day seemed to be filled with positivity and joy.

When I asked Arianna what her favorite part of the day was, she recalled a moment of pure bliss. While she was with her friends doing cartwheels in the grass, a man came up and asked to take a picture of the two. The experience was just one small moment that goes to show how loving and sweet all of the members of the pride were.

Not only that but Arianna as well as many others recall seeing Frankie Grande, Arianna Grande's brother, riding in a parade float. There were no other celebrity sightings that I have heard of. However, Pride Island, a musical festival held on both the 25th and 26th of June featured multiple stars, including headliner, Kim Petras.

Another person I got to speak with was Tahlia Tah, a member of the LGBTQ+ community. To her, pride means both the acceptance of oneself and the acceptance of others. She emphasized the importance of loving yourself to share the love all around. Tahlia mentioned that pride means acceptance even during a time when people are discriminated against and hated due to who they are. Pride, she explains, is coming together as one community with mutual love and respect.

Tahlias highlight of the day was the protest she was able to join while attending pride. The protest was run by a “powerful black woman who was like six-five, queer, and open and vocal about it.” Tahlia said that the woman was able to have a lasting influence over the crowd of people to whom she spoke, despite the short amount of time. The woman, whose name we don't know, led a march in order to bring awareness to a friend that she lost due to police brutality. Her friend identified as queer and was black as well as a victim of police brutality. The woman came from Baltimore to march in the parade and inspire others. Within a half-hour, the woman had gathered an abundance of people, including Tahlia to march by her side.

The last person I had the honor to interview was Zack Bennardo, another member of the LGBTQ+ community. When asked what pride meant to them, at first the answer was simple, “pride being proud, proud of who you are, proud of who you’re becoming.” Zack emphasized that for those who aren't comfortable in their skin, pride was a place where those attending can help embrace self-acceptance. Zack equates the word pride to a celebration. They say that pride is meant to celebrate every community, race, or sexuality that's been oppressed by the majority of the people. It is a day for those who have been oppressed to find a family and find love and acceptance in one another. Zack mentioned that pride means, “being able to spread love to people who may not get it when they need it.”

During the celebration, Zack was able to walk in the parade behind a float. They recall the moment as being spectacular, and the day being an overall wonderful day. Zack and many others had the chance to walk in the parade something that is freeing and powerful especially to those who feel invisible every other day of the year.

When talking to Zack, they mentioned the peaceful environment that surrounded them as well as many others during pride. Zack spoke about going to gay clubs in the past and feeling objectivity by the people. The stares and oversexualizing that seem to occur in the club setting were nowhere to be seen at pride. The celebration consisted of love and love only. Zack explains that it felt like pride everybody loves everyone.

Pride is not just being proud. It is love and respect. It is a time when people can come together and truly be themselves. After talking with these three amazing people, the word pride has a much deeper meaning.

Reflecting on my definition of pride, I would consider the word to mean being unapologetically yourself. The celebration in all its colors and glitter, allowed each individual to be just that, their person. The event was an excellent representation of the LGBTQ+ community and their infinite love for each other.

Love is Legal: US Passes The Respect for Marriage Act