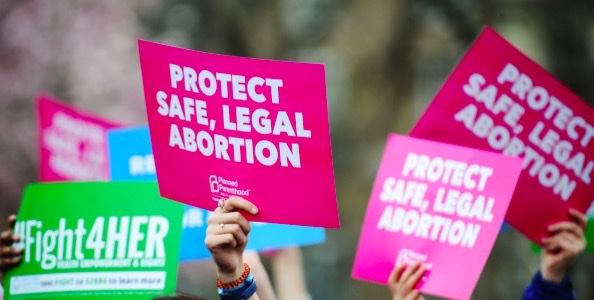 On June 24, 2022, the Supreme Court of the USA overturned Roe vs. Wade, a historical ruling which protected a woman’s right to abortion. This was done because abortion was not ‘deeply rooted in this nation’s history or tradition.’ Millions of pregnant women have now lost the right to access a medical procedure on the grounds of ‘history and tradition.’ The ‘tradition’ stemmed from the Christian Evangelical notion that life begins at conception. On 24 June 2022, a secular state imposed a Christian ideal on millions of women. Reactions to this ruling ranged from utter devastation to euphoria. Some mourned their loss of autonomy, while others celebrated their win in the battle for life.

Before the overturning of Roe, constitutional law, which took priority over any state law, protected a pregnant woman's right to abortion through the Fourteenth Amendment. Post-Roe, this no longer stands. It is estimated that more than half of American states will make abortion illegal with little to no exceptions. There have already been reports of individuals travelling to different states hoping to get an abortion.

Numerous social media users went online to praise India’s liberal abortion laws in light of the overturning of Roe vs. Wade. Abortion is undoubtedly legal in India, but how accessible is it?

India is improved in its legal groundwork in providing access to abortion. The 1971 Medical Termination of Pregnancy Act allowed married women to receive abortions under the conditions that they were performed within 20 weeks or if the pregnancy posed a serious risk to either the birth giver or the fetus. Later amendments to the act allowed unmarried women to undergo abortions. The 2021 Amended Medical Termination of Pregnancy Act allows abortion until 20 weeks, only in the case of rape, sexual assault, incest, and failure of contraception. The other requirement is that a doctor approves this procedure. A pregnant woman may receive leeway until 24 weeks if their life is under threat due to pregnancy, but now their decision is to be approved by not one but two doctors.

To place requirements on a procedure as vital as abortion already deems it inaccessible. This causes abortion to be depicted as a negative process, not lifesaving, not freeing, not kind, but grudgingly necessary.

Until 2021, abortion in India required the opinion of one doctor if it is done within 12 weeks of conception and two doctors if it is done between 12 and 20 weeks. The amendment allows abortion on the advice of one doctor up to 20 weeks and two doctors in the case of specific categories of women between 20 and 24 weeks. This gave women an extended time frame to undergo the procedure but still placed them at the mercy of healthcare providers, who often were not ready to approve or authorize abortions.

The Time of India published an interview with a married woman who underwent contraceptive failure and began the process of undergoing an abortion. Numerous healthcare professionals denied her permission despite repeated pleas and proof that she was clinically depressed. Responses ranged from her being the perfect age to have children to her faking her mental illness. Despite fulfilling the legal requirements for an abortion, the woman was forced to carry to term. The state indirectly gave medical bodies the right to dictate what women did with their bodies.

Poonam Muttreja, executive director at Population Foundation of India, spoke out on the amended 2021 MTP Act, saying that although there was increased access to abortions ‘they fail to correct a fundamental flaw in the MTP Act that a woman does not have the absolute right to terminate a pregnancy if and when she decides’. Abortion was not a right or a decision but a privilege that had to be approved or granted.

The state is also reductive in assuming that abortions only occur for accidental or forced pregnancies. The law fails to consider that an abortion may be dictated by financial situations, mental health, or simply a lack of desire to have a child. The requirement that a need for abortion must be due to contraceptive failure or a medical risk is in itself restrictive. It is this idea and long-standing social view that makes it inaccessible for so many individuals, as their healthcare providers refuse to authorize abortions on such grounds. Besides that, to this date, abortions have been regulated and approved by the government and boards of doctors.

If we look at India’s abortion laws objectively, they seem more liberal since they guarantee access to abortion. But the numerous societal, cultural, and sometimes legal barriers pregnant women face deem the laws redundant—there remain entrenched socio-cultural values and expectations that look down on abortion as a practice.

Abortion is ultimately health care; it is used to treat ectopic pregnancies, placental abruption, eclampsia or preeclampsia, and numerous other conditions. To chalk it down to simply ending a pregnancy is reductive. Having a child in today’s age is not just a religious duty or requirement but a financial decision and morenotably, a moral one. As many logically state, if one does not have the mental and emotional capacity to be a parent, they should not have children.

Making abortion a procedure that needs to be sanctioned by the state or medical professionals is an attack on female autonomy. The outcome of Roe Vs. Wade is a devastating ruling that puts women's rights in the USA back decades, but to make abortion legal and then deny it on the grounds of societal expectations placed on mothers is cruel. It allows children to be born into potentially toxic and unhappy households.

Instances such as that mentioned above are a failure on the part of our legal system; why are individuals denied the right to make decisions about their bodies? An abortion must be a decision made by a pregnant individual, not their healthcare providers, and indeed not the state.

The Divine Feminine And Her Creator, Mala Pal