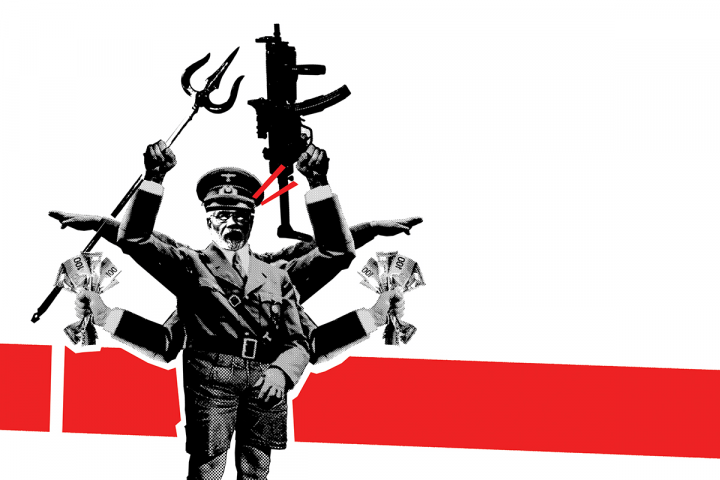 It is said that India is becoming an intolerant country that has begun to operate based on religious views. India is being vilified across the world as a country that oppresses minorities. India, which has always prided itself on its values of "unity in diversity," is now being accused of inciting intolerance and prejudice towards minorities. Minorities have argued that the majority's refusal to tolerate ideas that differ from their own has caused turmoil in social circles.

Mob lynchings, communal insurgencies, forced conversions, religious vehemence, hate crimes, and other forms of societal commotion can be witnessed. Executions under the guise of "cow protection" have become all too prevalent. Self-proclaimed vigilantes frequently target members of a certain faith.

Unsurprisingly, the growth of right-wing ideas in India's political landscape has exacerbated the problem. With the far-right gaining a foothold in India's legislature, many fear that the country is on the verge of becoming fascist.

What Exactly Is Fascism?

Fascism is a right-wing political theory that supports ultranationalism and a particular race or religion's interests. It denotes a centralized, authoritarian administration led by a dictator, with harsh economic and social repression and violent opposition suppression. It may be camouflaged as an oppressive democratic regime.

It first appeared in Italy in the 1910s, and Benito Mussolini praised it. It expanded throughout Europe after starting in Italy. One of the most prominent fascists was Adolf Hitler.

Let us take a look at the current situation in which our country finds itself and assess if it is on the verge of becoming fascist.

Elections have been suspected of being manipulated in favour of a certain political party, raising more worries about a slow and steady transition to authoritarianism. Many people have claimed that there are inconsistencies and deception in the election system, but because there is no independent authority to undertake an impartial inquiry, every claim fades away after causing some frenzy.

The administration's plan for a one-nation, one-election has also been viewed as a method to acquire more influence over the government, as it will be damaging to smaller regional parties and give the larger national powerful parties the final advantage. However, it offers additional advantages that cannot be overlooked, such as lower costs.

In India, the previous several years have likewise been a time of decline in journalism. The media has been chastised for being biassed and subservient to the ruling party. Many important concerns, such as corruption, educated unemployment, crime, communalism, and inflation, are frequently overlooked by the media in favour of chanting plaudits for the ruling party.

The media's lack of interest in challenging the government about its failed policies, the failure to implement various programs, fake statistics, and stated success that only exists on paper have cast severe doubt on India's press and media independence.

Even the few interviews that were granted to select media outlets were found to be pre-programmed with "lollipop" questions. The media seems to be more concerned with identifying the type of fruit that a leader consumes than determining his assertions’ validity. Many good journalists were accused of being persecuted for criticizing the regime too harshly.

The government appears to be developing a stronger and more direct grip on the media. This has also been simpler, given that the majority of private news channels and publications are owned by capitalist entrepreneurs with direct ties to the government. Some channels are managed by politicians or in which they have a direct financial stake.

Another issue that has persisted in recent years is the rise of communalism. In the last 25 years, the Hindu-Muslim gap appears to have reached an all-time high.

The administration has been accused of diverting public attention away from significant national concerns by focusing on trivial matters like beef, Azaan, and interfaith marriage. As a result of these difficulties, there is a high crime rate. The government has demonstrated its hypocrisy. It has selectively implemented its policies. Where consuming beef is not a problem in the North-Eastern states and Goa, it is in states like Bihar, Uttar Pradesh, and Hyderabad. The government's policies and actions are politically driven and based on entrenched interests.

The government has also abused the Constitution to instil fear in some segments of the population. The prohibition of cow slaughter, for example, is enshrined in the constitution's Article 48, "Organisation of Agriculture and Animal Husbandry." It states:

“The State shall endeavour to organize agriculture and animal husbandry on modern and scientific lines and shall, in particular, take steps for preserving and improving the breeds, and prohibiting the slaughter, of cows and calves and other milch and draught cattle.”

The Directive Principles of State Policy include this article. These are high ideals or general principles that governments should keep in mind while crafting policy, rather than a right. On the other hand, governments actively misinform the uninformed people through their spokespersons in news channel discussions to instil dread in their minds.

It's also worth noting that right-wing politicians frequently advocate lynchings over beef-related concerns. Innocent individuals of many religions are ruthlessly killed by the self-proclaimed Gau-Rakshaks, who are informally supported by the leadership, regularly without any formal investigations.

Such incidents have also been reported in Rajasthan where the victims were transporting live cattle (including cows) and were on a government grant for breeding reasons, among other things. Untrained, uneducated thugs are allowed carte blanche, and law and order are rapidly worsening. It should be mentioned that India is one of the world's top exporters of Carabeef (buffalo meat).

Government spokespersons and politicians at the highest levels have been caught on camera denigrating members of a certain faith, including those who lived 500 years ago. What does it all mean now? Why do you still deal with the British if you feel so strongly about the invaders? Why are you wearing and speaking in their language? The usage of Urdu has sparked debates, yet English connects with a person's status symbol and validates their place in society. People must realize that everything is being done to create a schism among the people so that they may be easily governed. It's done to keep other important concerns from getting in the way.

In India, the contemporary period is extremely hazardous. Though Article 19 of the Indian Constitution guarantees freedom of expression subject to certain (reasonable) limitations, criticizing the government, standing up for the rights, or supporting a particular segment of society can get you in serious trouble.

Someone might be labelled anti-national, pro-Pakistani, urban-Naxal, and so forth. People are afraid to speak up for their rights because of the government's fear-mongering. Debates have lost their meaning; today's news channels are replete with people calling one other names and assigning labels and tags to each other. Answers to inquiries are now deflected by giving labels to the people who ask them. Getting an anti-national tag by just asking a question has become a near-certainty. Those who choose to tell the truth are ruthlessly silenced. Long gone are the days when the pen was more powerful than the sword!

The Hindu-Muslim divide has also been exploited to achieve an electoral advantage by instilling extreme ideas in individuals by prohibiting interfaith marriages in Uttar Pradesh. Whereas Article 21 of the constitution guarantees the right to marry the person of one's choice, couples in mixed marriages, particularly those from the poorer sections of society, are frequently subjected to mental and physical torture by society's miscreants, often under the watchful eye of the police. Love Jihad is a phrase used to describe couples that come from rich homes.

Anti-Romeo Squads (also known as Nari Suraksha Bal) are state-sponsored organizations that publicly create annoyance by harassing men and women who are sitting or moving together without knowing their connection. Right-wing political groups in power believe it is essential and acceptable to do so in the name of Hindu philosophy, which they have almost certainly never studied.

Where religious freedom is a basic right protected by Articles 25-28 of the Constitution, state-sponsored initiatives like Ghar Vaapsi legitimize conversions by enticing people with financial incentives.

All of this undermines the fundamental fabric of Indian culture, which has allowed us to coexist peacefully for generations.

On the one hand, the government has tight control over everyday monetary transactions, while on the other, it is completely silent about the money that political parties get and spend at rallies. Whereas the average person is restricted from withdrawing funds from their bank accounts (white money), political leaders and their friends are shown living lavishly with no limitations.

Capitalism is extensively pushed, as a few business families become increasingly wealthy, and educated young are exploited by offering their skills for a pittance. It is commonly known that although BSNL, the state-owned telecom provider, is losing money, another private telecom business is profiting handsomely even while giving free calls and internet. There are just a few private firms that may be found in any industry area.

The markets are not as open as they are claimed to be in theory. People who work their tails off to make a decent livelihood are subjected to harsh, unjust economic practices. However, in the perspective of the governing class, everyone is a thief.

The governing class has successfully exploited bigotry to carry out its nationalist programme. The administration has diverted attention away from the most important issues by appealing to people's patriotic feelings. Even the patriotic slogan 'Bharat Mata Ki Jai' or 'Vande Mataram' has been used to get political mileage in the elections when it comes to patriotism. Nationalism has evolved into chauvinism, rather than remaining restricted to patriotism.

The epidemic had the greatest impact on migratory labour. They had to walk hundreds of kilometres due to a lack of transportation and lodging with toddlers and pregnant women. This puts them in danger of catching the virus as well as the fury of the cops implementing COVID-19 laws.

Because of the countrywide lockdown, many migrant workers lost their jobs on short notice. Because most workers paid daily, they found themselves in a situation where they lacked resources and skills. Instead of intervening to protect them, the government suspended several laws that protect their workers' rights.

According to a study of 11,159 employees from various states, over 90% of migrant workers do not get government rations and are refused payment by their employers.

So, are there any remnants of Fascism in the NaMo regime? Your sound judgment can find the truth.