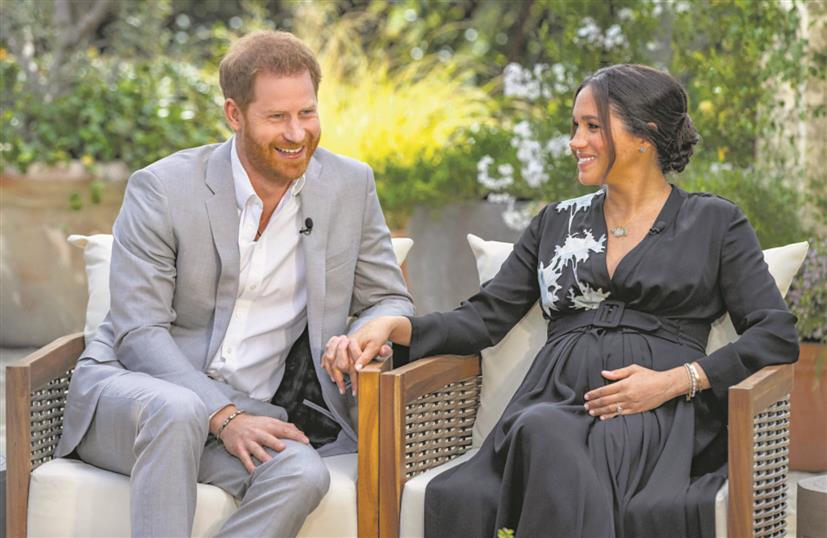 While Meghan Markle and Prince Harry's explosive interview with Oprah Winfrey has ignited a chain of accusations on the British Royal Family on the grounds of racial discrimination, the relevance and meddling nature of centuries-old monarchies in the modern society seems like an important follow-up thought, worth digging deep into.

"The two-hour sit-down of Prince Harry, 36, and Meghan Markle, 39, with Oprah Winfrey, shot last month near Santa Barbara, California, aired on Sunday night in the USA. It laid bare several personal details pertaining to the British monarchy and the manner in which it has approached Harry and Meghan’s marriage, right from concerns over the colour of their son Archie’s skin to mental health crises."   - The Indian Express (dated-10/03/21)
Even though this isn't the first time the British Royal Family has faced volatile accusations for safeguarding accused senior members of the family (the infamous Prince Andrew-Epstein controversy), it raises concerns over the extent of secrecy and censorship that vigorously favors the age-old supremacy of modern monarchs. When we look at the status and role of these modern royal houses, they strike as nothing more than a fancy symbol of national identity and an informal "Head of State". Known for introducing charitable trusts and educational grants, visiting nations across the globe and performing public duties by hosting various royal events and ceremonies. However, behind this billion dollar churning money machine exists an outdated model of political governance that continues to favor a wealthy household in dictating and dividing public opinion. And so, while we enjoy binge watching The Crown on Netfilx and debating about the consequences of Colonialism, a striking question ceases to haunt us - Exactly how much can the 'Royals' get away with before some prominent former member blows the lid off?
To understand the gravitas of such conundrum, one must explore the basic structure of monarchies and carefully evaluate the pros and cons of this political system. The form and nature of monarchies ranges from state to state. For instance, In Constitutional monarchies, the monarch retains significantly less personal discretion in the exercise of their authority as ruling figures and act as the informal leaders in public domain while keeping the historical and cultural image of a united nation intact. Examples of constitutional monarchies are - Spain, Belgium, Sweden, Japan, UK, Thailand etc. The oldest being the Imperial House of Japan (660 BC) throned by the Yamato Dynasty, current Emperor - Naruhito [regarded as Head of the Shinto religion and granted a position above the Japanese law]  and the most well known being the British Royal Family under Queen Elizabeth II. Although, these monarchies contribute significantly to the economy of their respective nations and various charitable causes, the financial transactions lack transparency and cost taxpayers a heavy amount of money (The Sovereign Grant Act 2011 of the parliament of the United Kingdom). Moreover, some of these monarchies have been getting a bad reputation for compromising individual's right to freedom and expression for the sake of 'national interest'. One of the recent examples being the wealthiest constitutional monarchy in the world under the rule of King Maha Vajiralongkorn, Thailand has been facing political turmoil over the draconian 'Lese Majeste' laws that look after the monarchy and exempts it from any form of criticism or public scrutiny apart from demanding worshiping of the leaders.
"Prosecutors in Thailand charged 18 pro-democracy activists with sedition on Monday, while lodging additional charges of insulting the monarchy against three of them. The sedition charges stem from an anti-government rally in September, though details on the alleged offences were not immediately clear."   - The Hindu (dated - 08/03/21)
The situation only worsens when we start exploring the other side of this coin - Theocracies or absolute monarchies. Absolute monarchies are a form of monarchy that grants supreme autocratic authority and power to the monarch, without being restricted by constitutions, legislations, customs or public demand. Examples of modern absolute monarchies/theocracies are - the Vatican City, Saudi Arabia, Sultanate of Oman, Brunei Darussalam, etc. While the authoritative powers are hereditary vested with the monarch, only a few pass the litmus test of  providing democratic freedom and human rights to its citizens. From the abduction of prominent members of the ruling family in UAE (Princess Latifa case); to imprisonment of political and social activists on grounds of sedition in Saudi Arabia (women's rights activist Loujain al-Hathloul), absolute monarchies seem to be holding back certain nations and their dream of freedom, peace and prosperity.
"Omani security authorities in Dhofar Governorate is cracking down on online activists who oppose the governor's development plans that will change the sultanate's southern region and wipe away parts of its landscape that have survived for centuries. The two human rights groups also said that Omani authorities are taking advantage of the current exceptional situation imposed by the Coronavirus (Covid-19) pandemic to pass their plans to transfer authority of the Dhofar Plain at a time when citizens are preoccupied with matters of their health and self-preservation. “The authorities in Oman must respect public freedoms, including freedom of expression and opinion, on and off the Internet,” the human rights groups said."     - Gulf Centre for Human Rights [dated- 08/03/21]
For monarchies to coexist peacefully with democratic governments in the modern day and age, there must be a clear check-and-balance system in place. Embracing the cultural importance of these royal houses by merely reducing their authoritative power to an informal title [neither above or below the law] can go a long way in striking a perfect balance between history and modernity. However, this can happen only if and when we start raising our voices against those who have been oppressing and butchering the demands for democracy and public-orientated governance. The importance and relevance of monarchies, be it constitutional or absolute happens to stand at a crucial crossroad. Even though the concept of monarchies offer cultural and historical validation, at the end of the day the truth is that the most powerful and wealthiest monarchies in the world right now are those which care less or not at all for the democratic and humane intent of its people. So, it's about time we start looking beyond the pop-culture infused reality of these regimes and call them out for what they truly are.
Share This Post On