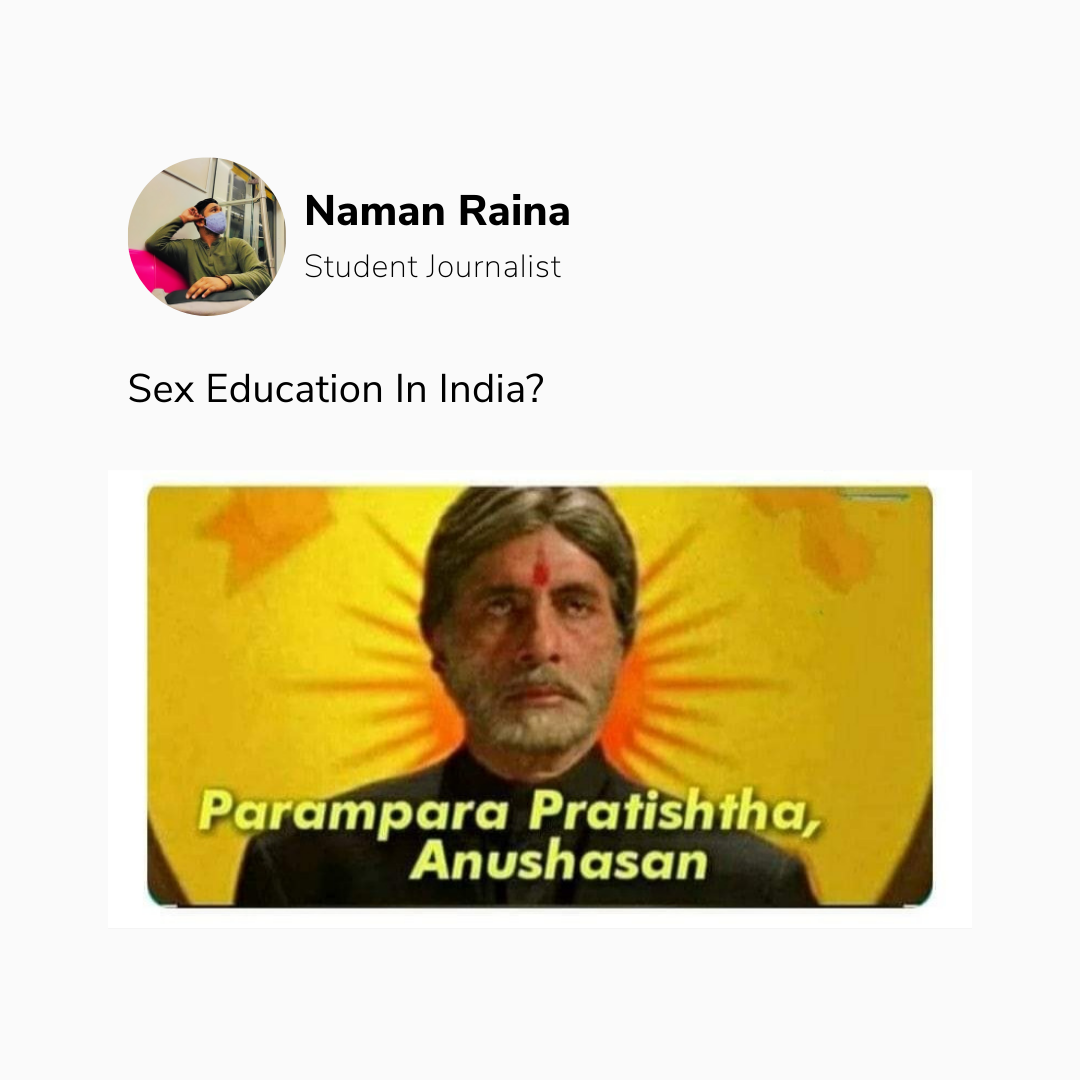 Sex Education, LOL! What Is That?

Sex Education, according to the World Health Organization, is a "wide curriculum aimed at obtaining information and attitudes, beliefs, and values about one's identity, relationships, and intimacy to develop a strong foundation for lifetime sexual health." Sex Education may also be defined as programs that provide information on sexuality and contraception. It is also known as studies about gender identity, consent, and sexual abuse awareness. Its goal is to raise awareness of sexual health, which is defined as a condition of physical, emotional, mental, and social well-being related to sexuality rather than simply the absence of sickness or infirmity.

In today's globalized and electronically linked society, where information travels at the speed of light, concerns like sex education have become increasingly crucial. Conservative attitudes on sex are becoming obsolete day by day, especially in a country like India, with its expanding teenage population and altering attitude toward sex due to the impact of the media. Furthermore, during the 1995 Fourth World Conference for Women, the need to integrate Sexually and Reproductive Health and Rights (SRHR) as Human Rights was stressed, making it a duty of all UN states to guarantee their implementation.

SRHR is a component of human rights that ensures the maintaining of fundamental principles such as:

• Inalienability (right from birth, and can never be lost),

• Indissolubility (rights, cannot be denied because it obstructs the enjoyment of other rights),

• Interdependence and interrelationships, (use of this right may be contingent on the exercise of other rights).

The majority of parents, however, do not give Sex Education, according to research. Even though the Indian government launched the ‘Adolescent Education Program' (AEP) in 2007 in partnership with the National AIDS Control Organization (NACO) and the United Nations Children's Fund (UNICEF), Sex Education is still a far-fetched reality.

Because of this gap, most adolescents turn to other sources for information about sex and sexuality, such as the internet, magazines, pornography, and so on, due to the lack of a Sex Education curriculum in most cases and teachers' unwillingness to take up the topic despite the curriculum being present in others. Because these information carriers are so unreliable, this may be damaging in a variety of ways. There is misinformation, unrealistic body image, normalization of objectification (as seen in the current "Boys Locker Room" case), aggression, abuse, dangerous sexual behaviours, and disrespect for permission.

Young people are ill-equipped to make healthy sexual decisions and build healthy relationships due to their ignorance. Girls leave school once they start menstruation due to this. There are also strict gender norms, child marriages, LGBTQIA+ discrimination, and sexual assault. Despite this, religious and cultural norms drive public debates on sex and sexuality education in India, with little to no consideration for scientific evidence. So, what is the next step?

Sex Education (Netflix) and Big Mouth (Hulu) are two popular series that tackle topics including sex education, puberty, and sexuality (Netflix). While the former is a teen drama about a kid named Otis who learns sex therapy from his mother and passes it on to his friends, the latter is an animated series about a group of 13-year-olds who navigate puberty with the aid of their hormone Monster/Monstress.

These performances have shed light on different topics, including sexually transmitted diseases, sexuality, gender identity, contraception, and abortion. Indian cultural channels such as Bollywood, Tollywood, and Kollywood, are known for generating sexist "item songs" and other similar content - frequently conveying a highly unhealthy idea of sex and sexuality.

The terms "sex" and "sexuality" carry a lot of stigmas and taboos in our society, and they are considered culturally sensitive areas, which leads to a practice of long silences among family members whenever such topics creep up or when a condom advertisement starts playing out loud on TV in the living room (we can all relate to this!). In most schools, there is also a complete scarcity of acceptable dialogue concerning sex education. While a provision for fitness and physical education is included in the mandatory program, the emphasis is on physical exercise and health checks rather than sex and sexuality.

Even when attempts are made to start dialogues, they do not pass the boundary of menstrual cleanliness. The girls and boys are segregated, to even discuss such biological processes (as was the case in my school). The conventional assumption that sex education may ‘corrupt' the younger generation is one of the driving causes behind this denial. Although, the government of India started the Adolescence Education Programme (AEP) in 1993 and acknowledging the necessity for sex education. It was reaffirmed in the National Curriculum Framework in 2005. There has been no unanimity among state governments.

The program was prohibited by twelve Indian states and governments, over the content of the curriculum judged "inappropriate." There are claims, that integrating sex education will lead to an increase in "risky behaviour" among teens and young adults. However, we must recognize that our conservative cultural views on sex will raise the likelihood of ‘risky' infections such as UTIs and STIs in young people.

In India, a comprehensive sex and sexuality education curriculum can be effective, in handling different societal challenges. It is a crucial component of HIV prevention and is beneficial in promoting good sexual behaviours and preventing Sexually Transmitted Infections. In our patriarchal culture, it can help avoid accidental pregnancy and sensitize boys about gender and consent. And therefore make the environment safe for women. It can assist teens in overcoming body image difficulties and avoiding unreasonable assumptions about other people's bodies. It has the potential to make the LGBTQIA+ community more inclusive and promote gender equality.

As a starting point, we should take conversations on Sex Education far more seriously and concentrate on developing a solid sex-ed curriculum that is appropriate for India. It will be critical to incorporate all stakeholders in the conception and design of this curriculum, including children, parents, and teachers. The primary focus should be on instilling healthy sexual attitudes in children and young people. And also giving them and their parents the information they need to make educated decisions.

Children as young as four years old learn about sex and sexuality using contextually relevant and age-appropriate information in countries like the Netherlands, which is a case study for a successful sex education program. As a result, the Netherlands boasts one of the lowest rates of teen pregnancy and sexually transmitted illnesses. They are one of the most gender-equal societies in the world. It is past time for India to follow suit and adopt a more liberal stance on sex and sexuality.