Social Media: How Does Social Influence Affect Our Self-Image and Happiness? 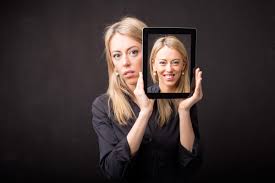 Today’s society has gained a shallow fixation on physical appearances; this is undeniable as the average person spends about 147 minutes on social media daily. Although the universal obsession with one’s looks has been around for many centuries, it has become exceedingly inflated as people continue to immerse themselves in social media.  Self-image, narcissism, and happiness are the topics writer Stephen Marche discusses in his work, “Is Facebook Making Us Lonely?” Marche utilizes facts and statistics from an objective point of view to explain the adverse effects that social media has on self-image, narcissism, and happiness in an individual.

People are no longer reflecting inside themselves anymore, rather they are simply looking at their reflections on the surface. They have become obsessed with other people’s concepts of beauty and therefore try to change their self-image in order to fit those criteria. One’s self-image becomes warped when they are constantly trying to become someone else.  Thus, Marche’s view on self-image revolves around his belief that people’s self-images are being molded by other people’s opinions.

Marche’s definition of narcissism aligns with the definition that the average person is most familiar with;  he sees narcissism as an, “... individuals need to engage in self-promoting and superficial behavior.” Marche believes that social media adds fuel to narcissistic tendencies as people begin to only care about themselves and how they look on social media. The pictures they post have to be the best-looking ones so that no one will be able to see their flaws.

Happiness, according to Benchley is closely linked to physical appearance and this sentiment is supported by studies that have found “physical attractiveness correlates positively with happiness”. He implies in his essay that happiness becomes more and more difficult to obtain as the person’s focus continues to stay on physical appearances.

Being so immersed in one’s looks is taxing on an individual’s mental health; happiness is hard to grasp when the only thing that matters is appearance. In fact, researchers studying whether there is a link between the body/self-image and mental health strain found that  “Body dissatisfaction was positively associated with reported symptoms of depression, suggesting the support of previous research indicating body dissatisfaction to increase mental health problems.”

Marche elaborates on this idea also in his essay; he says that as more emphasis is placed on appearances, the likelihood of being happy becomes slimmer.  Marche proposes that social media affects a person’s happiness negatively.  People have an odd desire to fool others into thinking they are happier than they really are, yet according to Marche, “The more you try to be happy, the less happy you are.” Therefore posting pictures that create the illusion or facade that an individual is happy actually makes the person less happy.  Stephen Marche elaborates on the idea that happiness is hindered when an individual prioritizes their appearance above all else.

Marche sees narcissism and self-image as essentially the by-products of social media usage.  He believes that the more people immerse themselves in social media, the more other people's opinions will have an influence on them. Happiness in his eyes is hindered by the obsession people have with their own appearances.  All the facades and disguises that people put up about their happiness actually make them less happy, yet they continue to make their physical appearances the focal point in their lives.