Taiwan and Its Similarities with Ukraine 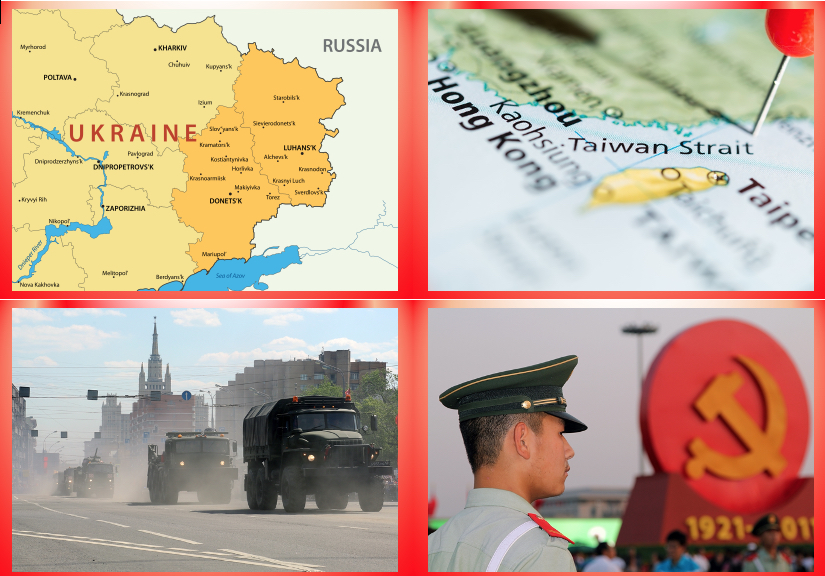 In the last months, tensions between Russia and Ukraine have captured global attention. Russian President Vladimir Putin has long argued that Russians, Ukrainians, and Belarusians, who were once all part of the Soviet Union, are one people who should all live in one Russian-led state and has attempted to take control of the other countries, most recently in 2014 with the invasion of Crimea.

Russia's threats grew stronger over time until in late February of this year, its military forces announced a special operation to demilitarize the country. In reality, they de-facto occupied the Donbas region, and a chain of events ensued, culminating in a full-fledged war between Russia and Ukraine.

During this period, Putin has ordered the bombing of residential areas and civilian infrastructure, killing innocent lives, it encouraged the flight and exodus of millions of Ukrainian citizens that have found asylum in Poland and other European countries. The latter is trying for a diplomatic approach to end the conflict, providing at the same time both humanitarian and military help to Ukraine, and imposing economic sanctions against the follies of the Russian leader.

The whole situation and status of Ukraine have plenty of similarities with what has happened, and it is still happening in Taiwan. Indeed, the superpowers threaten both countries, and their independence is at stake. Both China and Russia, respectively, view Taiwan and Ukraine as a natural part of their sphere of influence and want to annex them into their territories, to recreate a sort of empire.

For many years, Japan administered Taiwan, also known as the Republic of China. However, after the Second World War ended in 1945 and the Potsdam Declaration was signed, Japan lost all of its colonies, and the nationalist government of the Republic of China (ROC) took control of Taiwan. During the civil war in China, ROC and communists fought against each other for control of the country. When the ROC government withdrew its forces to Taiwan and the communists won, the People's Republic of China was founded on the mainland. In 1971 The United Nations recognized the PRC government as the legitimate representative of China, and the ROC decided to leave its seat at the UN.

When Taiwan, the Democratic Progressive Party, was established as a force of opposition to the conservative ROC, a process of democratization began, and Taiwan started claiming independence from China. China enacted a proposed anti session law that allowed the use of force in the case in which Taiwan declared its independence. Even if this law was rejected by many, the anti-secessionist thinking still represents China’s claim of sovereignty, authority, and legitimacy over the state of Taiwan.

Today, The Republic of China has an independent government, a defined land, settled citizens, and is a sovereign nation. Additionally, since China does not exercise control over the country, its claims of supremacy over Taiwan are meaningless. Despite the certainty of this declaration, the question of Taiwan's independence remains a controversial topic today. Most states do not recognize Taiwan as an independent subject of law. They fear the consequences of opposing the one-China policy and principle, which affirms that China and Taiwan are inalienable parts of a single China; indeed, they know China is powerful and see no reason to antagonize Beijing.

Both Ukraine and Taiwan share the international community's inability to defuse the tensions that have arisen, and the support of other powerful countries. Only recently, the US Undersecretary of Defense Mara Karlin argued that Taiwan must do everything possible to ensure that its population is ready as quickly as possible if China should choose to violate its sovereignty as well as Russia did with Ukraine. Both Putin and the Chinese president Xi Jinping are nationalists and even imperialists and feel they are invested with a mission, the same, that of reuniting the unredeemed lands with the motherland.

A clear disadvantage vis-à-vis the rival further characterizes both people notwithstanding the various similarities, the two countries differ in just as many aspects. First of all, Ukraine has been an independent state for over thirty years, whereas Taiwan, despite being independent, is recognized by only 14 states around the world. Moreover, although they both enjoy the support of the United States, the two countries can benefit from it in a completely different way. Indeed, Taiwan is the 9th biggest commercial partner of the USA, while Ukraine occupies only the 70th place; there lies the difference in the support from the world's most influential and economically powerful. The two nations are also geopolitically very distant. Ukraine is very close to Europe and receives direct support from those countries, and could one day, as already discussed, join NATO (the North Atlantic Treaty Organization, an intergovernmental alliance between 30 member states). While Taiwan, situated in the Pacific Ocean in Continental China, is much more isolated. Its independence not being recognized by many countries also contributes to its higher insulation.

Given the invasion of Ukraine, the Taiwanese are very much worried and see the invasion of Ukraine as something that could happen to them as well; for this reason, 70% of the population says that they are ready to resist any attempt at reunification. In addition to that, Xi Jinping could take inspiration and strength from the Russian invasion to actuate its reintegration plans.

In conclusion, the stronger countries have brutally treated both countries, and their independence has been equally at stake. Now, however, the difference lies in the fact that a real war has started in Ukraine, while in Taiwan the war is only a concern, that will hopefully remain the same.