The dimly-lit torch of Equality 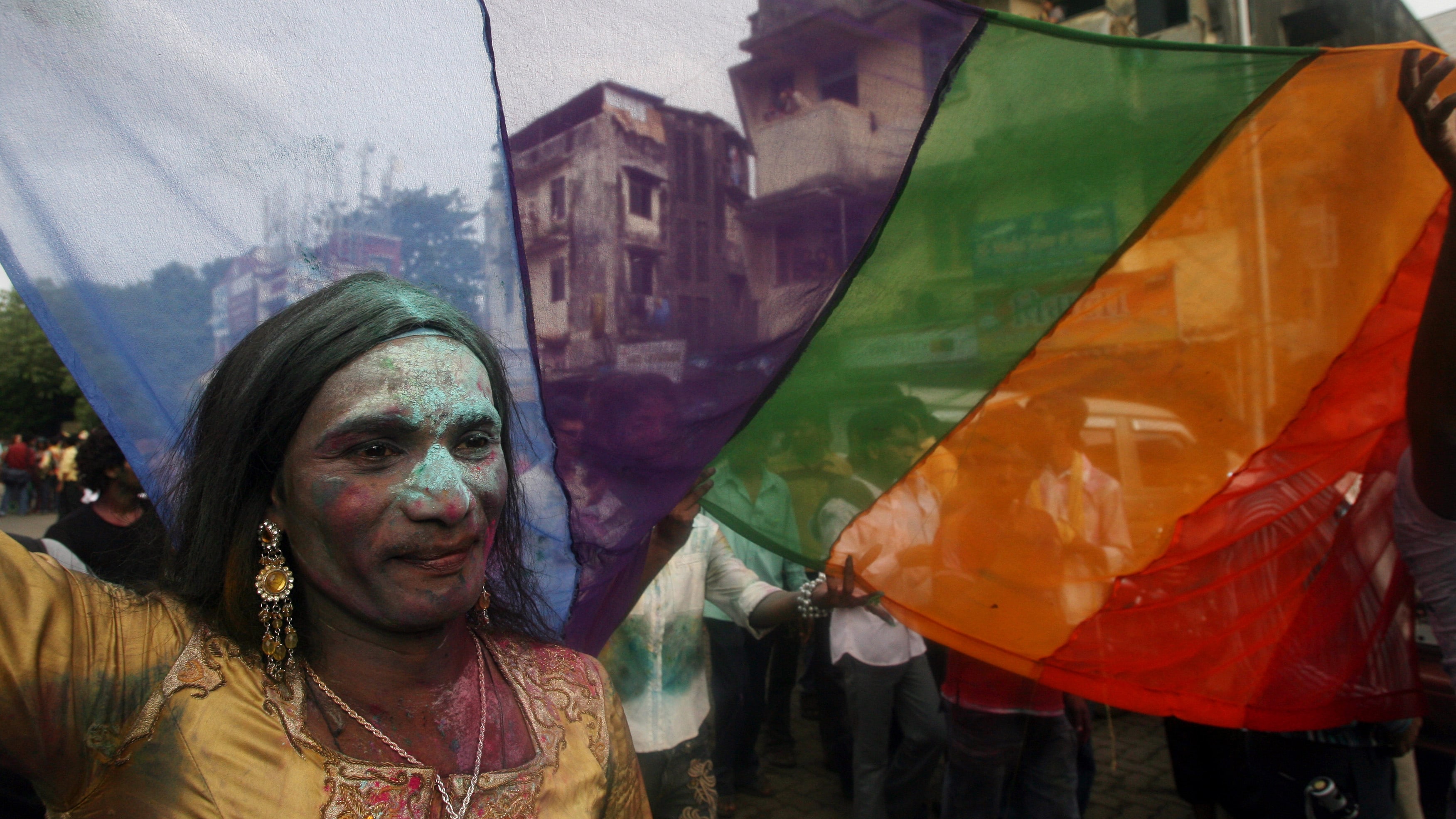 From Social exclusion to the pandemic, the transgender community's tale of insurmountable odds

Humiliated. Mocked. Archetypes to a narrowed convenience. Dismissed. Chased Away. Degraded. Segregated. When fragile human beings being different, being strong and brave try to adjust and break through the conventional anomalies of the self-declared perfect society, its disciples often tend to bring these people down along with their level. Or much worse, leave them insatiably exposed to the murky businesses of the simulated world without a hint of knowledge. If God anointed its messengers to flick away the impurities in the world, all there would have left is rigid masculinity and practitioners of beliefs that are out of existence. They say the people and the society that is run by people has come a long way ahead being mindful and considerate of all changes and amends that took place so far. Indeed, they were changes. Catastrophic changes, indifference and hostility. So much that the world has achieved, but none to share with the people that they see as incomplete, abnormal or formidable. These people are people too, with a different sense of identity and style. They complete the extensive gaps the 'perfect people' keep creating. Their stories reflect on these gaps. These are men who are also women and women who are also men. It is getting hard for them to live because they are not welcome in the regular circles of society.

India has approximately 6 million transgenders, or that's what it says on the paper. This is not just a social outcry. It also lies under the educational, economical, public welfare, cultural, legislative and professional umbrella. A product of multiple mistakes and severe overlooking. And societal stigma. Gallons of societal stigma, flowing through currents of people's mindsets carrying an innumerable amount of notion. There are hundreds of stories of trans-phobia displayed by people, but nowhere to know its cause. There is a seemingly low bar on the sense of acceptance from the people, naturally assuming that it's the higher power of normality and the radar subjects them to avoid trans people to help. If the idea is that the transgender community isn't putting up a tough fight, it is because the people aren't letting them. The loathe has walled the agitation to protest or rebel. The frustrating and lurking silence is screaming for what led them to indulge in what has accounted for the most notorious businesses run by damaged lives. Unfortunately, it is normal and legal in the country.

For the transgender community, life is a churning project. For an individual, the feeling of acknowledging your existence being different hits in bombarding ways. The entire banter of family, society and livelihood comes crashing down to make quick life-long decisions. Since these people often come from rural areas, their families are neither familiar nor aware of the phenomenon of being transsexual. Since old orthodox practices are their only logic, these people don't get the support from the family they need. Familial confidence ticked off from the box. These people determined, set afoot on their own to explore their life and sexuality, to be a being of themselves. Some of them determine to get educated and earn a valuable place in the world. That is the first instance of these individuals feeling unsafe in their skin. Teachers and students pounding upon eager learners on their uncanny appearance and behaviours. Going back home and showing up again with insecure hearts of being have to endure the pain every day, they live through the nightmare again and again. The traumatic echoes of biased slurs and mental abuse do not make encourage them to continue their education in this way, and hence they slide back home. Out of the massive 13 lakh student lot appearing for Board exams, there were just 19 transgender students. A huge giveaway of abuse physical and mental abuse that starts within the walls of the esteemed education system might want to give up on their dreams and aspirations.

The legacy of societal stigma comes with a long trail and infests at every place these people wish to pursue. The gluttony of atrocity doesn't end, because the patriarchal subjection has now arrived at workplaces and has made several more transgender individuals unsafe again. To break the silence, you need to speak up, and that's exactly what happens in the workplace as a pre-requisite. A person being mocked upon for their unusual way of speaking is a perfect example of non-acceptance and trans-phobic treatment hindering the powerful transgender community from ace in their goals, and be aimless again. Another reason why ridicule causes economic crisis among the community because of lack of job opportunities, as the people of the community aren't of the required calibre, the hidden language of dismissal and sheer gender bias. The main reason why the community isn't employed and resourceful is us and the feisty wounds we inflict on them.

India has massive loopholes in providing citizenship to its citizens. Apart from the immigrants, Muslims and unrecognized people in the streets, the transgender community are living in the country, belonging to a sacred background, living and breathing the Indian way and still not the official citizens of the country. Who knew the government would also be biased while being anti-incumbent, unaccountable, defiant and power-hungry? Presently, the transgender community has no government document to prove their citizenship, putting heavy boulders at accessing facilities they are rightful to have when in financial distress. Plus the constitution allows people of the community to stand up and represent the suppressed lot if only the pea-brained democracy accustoms itself to the idea of a transgender politician. Ushering the community into the government offices could bring a lifetime of fulfilment in promises people have been begging to make things abridged for them and around them. There's the freedom to do anything, be anything, say anything.

And while, the stigma, atrocity and trans-phobia were boiling up at their peak temperature, the situation burst into hate crime. As the community isn't the perfect formation the society expects them to be, they don't deserve to survive. Missing media radars fail to report on the escalating hate crime rates, especially about the transgender community. We have enormous sympathy and support for women when they become they become victims of devilish shenanigans but take our eyes away if it's a trans person. Several justice wars have been fought to get the rights that truly belong to one individual, two people, an organization and the whole fraternity. Shockingly, there's seems to be no justice for transgenders, because they are transgenders. People from the community got up on their two feet and started amplifying the pressing need to protect them, just like the rest. They need equal rights, the ability to have equal fights, and being a giant in the room because they can be. The biggest luxury the person can afford is ignorance and the community got consumed in it.

With no resort whatsoever, the community gets down to the one profession they could be welcome into and have no prejudice for pursuing it, in addition to making a profitable business out of it. Prostitution. To the realities of them, they have to lead a secret life there as well. As quoted by toxic masculinity, humanity happens by unspoken moments. Of maintained silences and frayed speeches of resistance. Men of intense sexual hunger show up at the doors to blow off the steam they own to do it. No judgments there. It is their bread and butter. And what are they willing to earn for it. Client-worker confidentiality works here, to not oust the people you have sex with. And in fear of aggressive clients ruining their business, they conceal their identity. Hidden, kept in locks and muffled to satisfy the client's needs. The identification code is mutual, understood and only promising people are invited.

In 2019 when the Supreme Court passed the trans bill identifying transgenders as the third gender and to be able to enjoy all liberties and amenities, it left the community in staggering splits. The law dictated the act of registration among transgender individuals to register themselves as ‘transgenders’ further allowing them to procure a certificate to undergo treatments like gender assignment surgeries and psychotherapies. Transgenders aren't officiated with governmental documents. It is an integral truth. And it is their story, a narrative of arduous and audacious events. It is their life, and it must not follow the protocol of saffron saturation. Right to information, although sounds a matter of privilege in the country of what happens is the declaration without prior intimation. The Bill got drafted without even asking the people of the transgender community to as to their needs and requirements from the law. A classic of the Indian judicial system, the stereotype is everyone's bounded scripture.

In the pandemic-wound era, the transgender community has hit a serious cliff. With lockdown hit instantly, it puts a difficult question of being able to get food or groceries because of an immediate shutdown, causing zero income from the sex workers. With no proper healthcare assistance, these people are robbed of their gender assignment surgeries and health checkups for HIV and AIDS. Some peculiar difficulties of our system and societies are making the trans lives a massive hellhole all over again. There are generous organizations and help centres identifying and hearing the dire need of food and occupation and no amount of false assurance to replace that. It is not too hard to admit the transgenders are people too, they have lives and have burdens of scrutiny to lift off too. The perfect society needs to wake up, look with broad eyes and bring apart the wall separating the humanity and kindness they deserve, big time. It is the 21st century and they need allies, like everyone.

How To Support Transgender People!