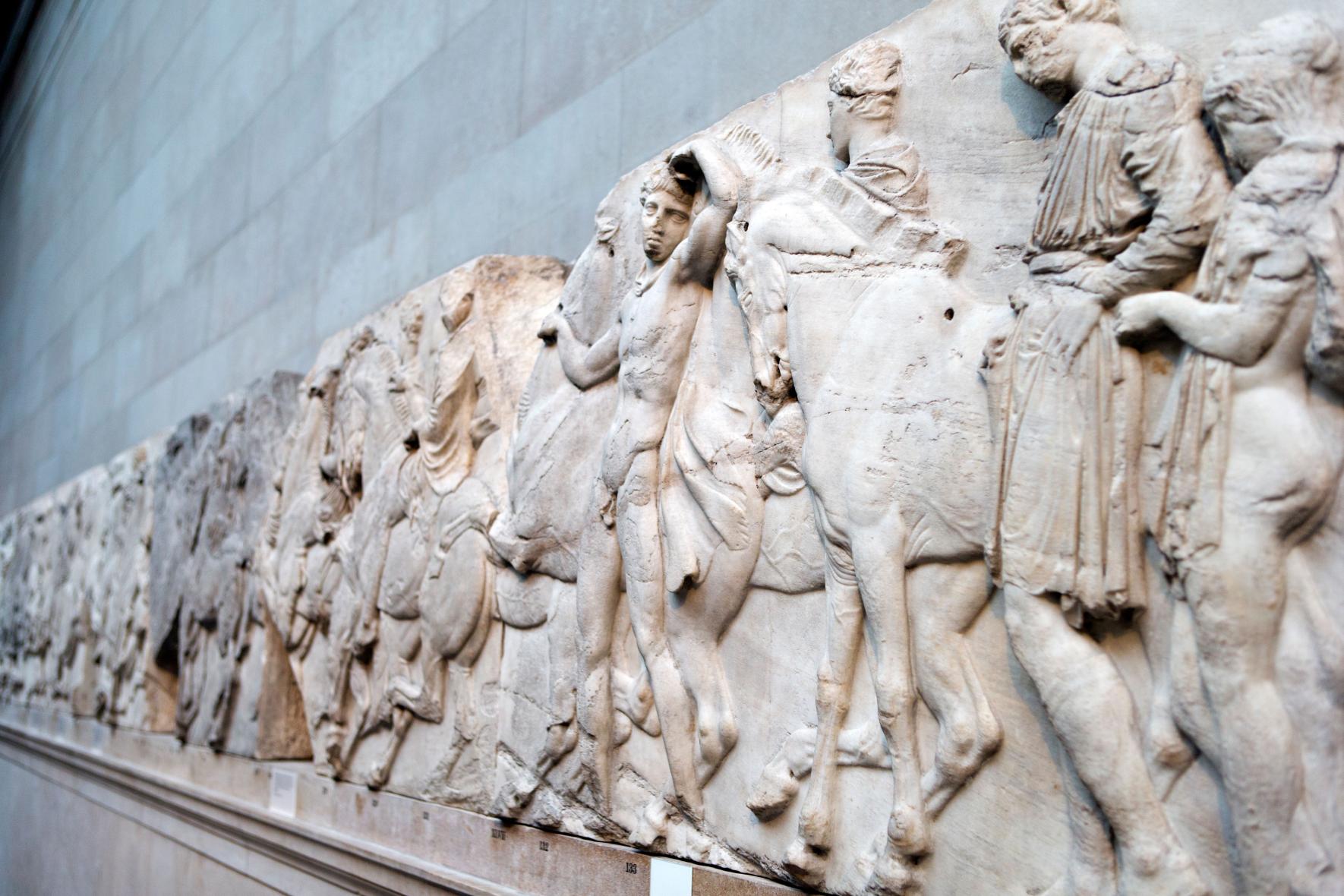 Following the 13th anniversary since the opening of the Acropolis Museum, the end of June saw yet another protest in front of the British Museum in support of the return of the Parthenon Marbles to Greece. The Marbles – also known as the Elgin Marbles – are a collection of Classical Greek marble sculptures dating back to the 5th century BCE that were found on the Parthenon and other structures atop the Athenian Acropolis; acquired by Thomas Bruce, 7th Earl of Elgin under dubious legal circumstances between 1801-1812, the restitution and repatriation of these great cultural monuments has been the subject of intense debate and discord in the UK and Greece amongst politicians, academics, and campaigners in the art sphere.

Thanks to the work of the International Association for the Reunification of the Parthenon Sculptures (IARPS), the drive to reunite the artefacts with Greece has become – without doubt – the most famous and well-known campaign of cultural artefact repatriation, with many public figures weighing in to have their say: comedian Stephen Fry has called on the country to, “stand on the right side of history” and return the Marbles to Athens, whilst actor George Clooney – discussing wider repatriation– told Greek newspaper Ta Nea in 2021 that, “there are indeed many objects of historical value that must be returned to their original owners. However, none of them is as important as the Marbles of the Parthenon.” Most recently, London mayor Sadiq Khan has called for a “deal” whereby the UK and Greece can “share” the historic artefacts. Although Prime Minister Boris Johnson has historically remained fickle-minded on the Marbles’ return, he has mostly avoided government responsibility by asserting that the restitution, “is a matter for trustees of the British Museum.” Nevertheless, looking to the history and other cases of repatriation reveal how the spheres of politics and culture have always been so inextricably intertwined.

The history of restitution and repatriation

Repatriation (also known as restitution) is the return of stolen or looted cultural materials to their countries of origin. The concept became increasingly legally accepted from the 1950s following the theft or destruction of artwork by the Nazis in the Second World War; beginning with the 1954 Hague and 1970 UNESCO Conventions, these legal agreements both ratified the protection of cultural artefacts during armed conflicts and allowed for their seizure provided there was proof of ownership. However, the return of unlawfully excavated and exported cultural property was only finally enshrined into international law in the 1995 UNIDROIT Convention on Stolen or Illegally Exported Cultural Objects. Since the 1990s, a flood of repatriations has taken place, largely between Europe and numerous former colonial settlements.

France & West Africa: the relationship between repatriation and diplomatic capital

Following the election of Emmanuel Macron in 2017, the French president was presented with a report by Senegalese economist, Felwine Sarr, and French art historian, Bénédicte Savoy, entitled The Restitution of African Cultural Heritage: Toward a New Relational Ethics; starkly revealing that 90-95% of African cultural heritage items are held and displayed in European museums, the report strongly called for sub-Saharan African artwork and artefacts – much of which is held in the Musée du quai Branly-Jacques Chirac in Paris – to be returned to the former French colonies – principally, Chad, Madagascar, Mali, Côte d’Ivoire, Senegal and Benin – as a form of reparation for colonial atrocities. The Sarr-Savoy report clearly struck a chord for the French president, who declared at the University of Ouagadougou on November 28, 2017 that, “within five years I want the conditions to exist for temporary or permanent returns of African heritage to Africa.” The French President later tweeted that same day that, "African heritage cannot be a prisoner of European museums". Macron’s commitment to repatriation and the Sarr-Savoy Report catalysed a wave of restitution applications over the first five years of his presidency. Most notably, in December 2020, the French Parliament – the National Assembly and the Senate – approved and ratified a restitution bill guaranteeing the permanent return of 27 colonial-era artefacts to Benin and Senegal, including the sword of El Hadj Omar Tall, which had been initially loaned to Dakar's Museum of Black Civilisations for a period of five years.

However, it would be entirely naïve – if not foolish – to regard such restitutions as simply acts of kindness or friendship and to ignore the politics which is driving them. The relationship between France and West Africa has always been of supreme importance, even after the independence of former colonies: France still remains a major economic trading partner for the bloc, with exports to Africa increasing from US$13 billion to US$28 billion in the last twenty years, whilst foreign direct investment (FDI) has increased tenfold, from 5.9 billion euros in 2000 to 64 billion in 2019. However, the rise of other agents of FDI – notably China and its Belt-and-Road initiative seeking to connect the continents of Africa and Asia by means of increased investment and trade – is now threatening to diminish France’s economic and political influence in the region.

At a Ceremony of Restitution that took place in Benin on October 27, 2021, Macron and then Minister of Culture, Roselyne Bachelot-Narquin, went to great lengths to stress, “the renewing and deepening of the partnership between France and the African continent”, with the president and the Minister of Culture each repeatedly stressing the newfound “partnership” and “relationship” that the repatriation of these items represented. Despite the declining importance of France in West Africa both economically and politically since the independence of many African countries, it might be that cultural repatriations are becoming an instrument of ‘soft power’ through which France hopes both to make amends for colonial atrocities and retain influence in the face of Chinese competition.

The Marbles' impending future? The diplomatic potential of restitution in post-Brexit Britain

Although it seems unlikely that a deal will soon be agreed by the UK to restore Greek ownership of the marbles, the deputy director of the British museum, Jonathan Williams, has recently suggested a, "Parthenon Partnership" could be agreed with the Acropolis Museum and the Greek government, whereby the Marbles could be returned on loan to Athens for the first time in more than 200 years. At a gathering last week to celebrate the 48th anniversary of the return to democracy in Greece, there was a sense of cautious optimism concerning the Marbles and their potential return to the Greek capital. "The atmosphere has changed," the Greek Minister of Culture, Lina Mendoni, told The Sunday Times, "with goodwill we can find a way forward for both parties.” The Greek Prime Minister, Kyriakos Mitsotakis - who has previously expressed desire to, "strengthen further" Greece's relationship with the UK by, "reunit[ing] the Parthenon Sculptures in Athens" - also repeated at the same event that although Greece was open to negotiations, "baby steps are not enough. We want big steps."

If post-Brexit ‘Global Britain’ truly seeks to look beyond Europe for economic opportunities and greater international influence, perhaps it is high-time to re-evaluate the ownership of some of these treasured works of art and culture: from the Koh-i-Noor Diamond and the Rosetta Stone to the Benin Bronzes and Moai Statues of Easter Island, there are many contested items causing diplomatic consternation for Britain that are perhaps obstructing economic and political co-operation with new potential partners. Looking to the example of France, restitution and repatriation might offer Britain a chance not only to make amends with the Commonwealth, but to regain a sense of political and global importance within and without Europe.