The Erasmus Generation - Why After 20 years ‘The Spanish Apartment’ Remains Relevant? 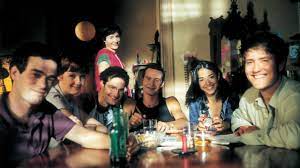 One week ago, I accidentally came across the well-known film The Spanish Apartment, directed by Cédric Klapisch. The large cast of actors of all nationalities was an incentive to retrieve the film’s vision immediately, which has marked an entire generation for years to come, and I enjoyed it a lot, surprisingly.

The film is a light-hearted yet colourful adventure that captures the bittersweet fusion of sadness over the friends and family left behind and the excitement of discovering a new way of life in unfamiliar surroundings.

The plot is simple: to have a chance of getting a well-paid and prestigious job position at the Ministry of Finance promised to him by a friend of his father, Xavier Rousseau, a twenty-five years old Economics student embodied by the famous French actor Romain Duris, needs a perfect command of the Spanish language. Thus, taking advantage of the European Erasmus+ University Exchange Programme, the young man says farewell to his hippie vegan mother and possessive and frightened girlfriend Martine (Audrey Tatou), and lands in Barcelona for one year. Before landing, he meets a 50-year-old French couple on the aeroplane who host Xavier for a short time on their sofa until he permanently relocates to a messy, eclectic, multicultural shared apartment with seven other individuals from the four corners of the continent.

The story is simple, ordinary and realistic. At first, the protagonist is fearful and sad and maintains a long-distance relationship with Martine. At the same time, he meets Isabelle (Cécile de France, who won the César Award in 2003 for the most promising actress) and brings the shy Anne-Sophie (Judith Godrèche) out of her shell. The encounter with the female universe will make him lose the points of reference, projecting him into the emotional vortex of love and merging almost totally with the Spanish culture.

In a movie sequence, Xavier finds the statement “L’Auberge Espagnole” (The Spanish Inn, then translated into “Apartment”) in the vocabulary and discovers that it is a French expression used to describe a place where everybody takes their provisions to eat, as used in Spanish inns in olden times: “you get what you put into it”. From that moment, Xavier’s trip (or the audience’s trip) begins. His change involves the migration from a stifling and buttoned-up Paris to the liberating and “wild” Barcelona that will evoke in him a revelation. In the end, his choice is not where he belongs geographically, but what in his heart that has been enlightened.

A deliciously bohemian multiculturalism symbol, The Spanish Apartment from 2002 can be considered a cult movie through a mixture of languages and it offers the perfect insight into the typical Erasmus+ experience. It depicts everything a European student has been through in his university career. Whether you have already experienced the lively and sometimes chaotic Erasmus lifestyle, want to reminisce, or are curious about it, you will embark on this unforgettable cultural whirlwind. The Spanish Apartment is a must-see film also because it is greatly enhanced by entertaining dialogues, playful dynamics between the characters, the refreshing soundtrack, eccentric art direction, and imaginative camera usage. In my opinion, the importance of this film relates to the celebration of diversity in terms of culture and sexuality.

Interviewed by the French journal Le Figaro in 2017, Cédric Klapisch declared that the realization of this film was inspired by her sister’s true story, who lived in Barcelona with other roommates. Additionally, he met many students who had experience with the Erasmus+ programme and tried to transpose the small details as best he could and the administrative hassles they had experienced. However, no one has ever said he was disappointed with his Erasmus+ year among all the testimonies he gathered. Notably, the Catalan capital has always been famous for its incredible relaxing lifestyle, its large number of bars and discos, but also for the friendliness of its inhabitants.

During these years, Europe has experienced a significant economic and migration crisis, an increase in youth unemployment, repeated terroristic attacks, the resurgence of conflicts, and Brexit. Thus, Xavier is a symbol of innocence and hope. The explicit desire of the director was to represent on-screen the harmony between humans and Europe itself. At the beginning of the 2000s, the European Union was still dominated by the logic of the post-war era, which led to its creation: to strive for peace, reconcile nations, and strengthen relations between Europe and Germany. Spain, together with Greece, is the symbol of this disenchantment.

Founded in 1987 by Jacques Delors, the famous university's students exchange programme has allowed 11.7 million youngsters to travel, study, and play around for an entire year. There is also a fun fact related to the movie: the registrations to the Erasmus+ programme even doubled after the release of The Spanish Apartment!

Erasmus+ means discovering and getting in touch with new habits to complete studies and frequently change into what your parents always hoped you would become: a lawyer, a doctor, a diplomat, a banker; a respectable, wealthy, and successful person.

Xavier is everyone who left to have an experience abroad and then comes back changed and needs to review their plans or parents’ will.

In my personal experience last year, I lived in Portugal for three months to enjoy the European Solidarity Corps Programme, which was born to improve the former European Voluntary Service, co-funded by the Erasmus+ Programme of the European Union. There are plenty of opportunities for young Europeans aged between eighteen and thirty to volunteer and support education, training, youth, and sport. The ESC project can last from one month up to one year.

When I decided to be involved in this exciting opportunity, I knew that I had to cohabit with seven people of different origins and cultures. There was a French girl, two Austrian, a German, a Greek, a Polish, and a Turkish. It was super rewarding to meet so many different individuals. For me, it was like the spirit of Erasmus.

Within this framework, the film examines a well-known and thorny issue such as cohabitation. Everyone has experienced sharing or demanding a small space inside an apartment with perfect strangers. How difficult it is to adapt to the needs of a community, and how much to stand out from the crowd? Chores like cleaning the house or evenly fridge-sharing can be exhausting and educational at the same time. We all had a roommate obsessed with cleaning and one who has never picked up a broom, not to mention the more or less tidy roommate or more or less talkative. The thin thread of understanding and endurance can break at any moment.

I saw myself, particularly, in the character of Wendy (Kelly Reilly), an English girl who can only be present and outgoing when she runs the household. The diligent and studious girl with little desire to get out that when others drag her out, can have fun. I am Wendy, good at giving a positive image of myself as clumsy to let myself go. However, the magic of a group going through a crucial period of life together is not replicable anywhere else and then it’s hard to go back to the old life. In one hallucinogenic delirium, Xavier dreams of not remembering his other tongue and being 100% Spanish. So whether you are French, Italian, English, or Danish, it doesn’t matter. In a foreign country, there aren’t differences or masks. Everyone can be who they want to be without filters and constraints. So please enjoy the student life and get on the first plane. Destination: Europe!