The ignored problem of eve-teasing 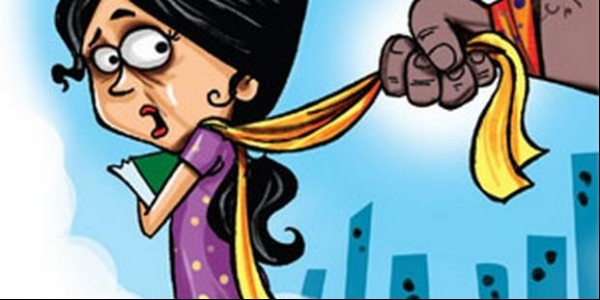 As much as I love my city, but sometimes I’m scared to walk alone in the streets. Whenever my loved ones tell me to inform them when I’m home, I feel like their concern is purposeless. But at that time, I forget the chances of being sexually harassed, assaulted, or just being raped.

Ghaziabad is a city, neighboring Delhi, infamous for crimes. The city would feel like your home in just a few days and life here is, like any other metropolitan city, fast-moving. The city has several incidents of theft, robbery, and crimes against women. But one issue that lacks the limelight is eve-teasing in Ghaziabad.

The issue is not highlighted anywhere but being a girl living in the city for 20 years I realize the fear. Eve teasing is something that has become a part of society. It is scary how it is thought to be normal and something that we’ll have to live with. On a regular day, while walking on the street, a girl may forget what could happen to her.

The issue is dismissed as a small issue until we’re exposed to the situation ourselves. The problem is usually hidden behind other crimes against women, like domestic violence. But it deserves equal attention as the mindset that allows a man to do such crimes is the same.

Eve teasing is a situation where a woman is publicly harassed or assaulted by a man. Teasing, staring, passing comments, groping, display of private parts are some acts that come under eve-teasing. It many times leads to bigger crimes such as murder, rape, or acid attacks. It doesn’t even give time to react and leave women in shock. Women are forced to ignore these incidents. They’re unable to take legal steps as they don’t recognize the offender and cannot plan to attack them as they’re not trained for self-defense.

The people of Ghaziabad are not all bad, they would make you feel welcomed. The streets will become familiar and you would roam around owning the city. But then a random guy passes, making a vulgar comment and you’re back to feeling helpless, scared, and very angry.

Bollywood movies, tv daily soaps, songs have made this practice look ‘romantic’. Passing comments and following a girl is depicted as a girl’s wish. The expression of being uncomfortable is shown as her shyness. But in reality, this is not romantic and is frightening for a girl when a stranger follows her.

“I was going back from my tuition when a few drunken guys came from behind in a car and held my hand. They drove slowly, making me run while holding my hand. I cried and shouted when some people from around came and the car drove away. I stood there, crying, having no idea what happened when someone called my father and he took me home.”- testimony of Shristi Sherawat. She’s from Ghaziabad and this happened when she was in class 10th.

“I went on a walk in the morning one day, like I used to usually, with my headphones on. Suddenly a guy came on bike from behind, groped me and ran away.”- another girl from Ghaziabad, who didn’t want her name quoted.

These incidents took seconds to happen and nobody knows what more could have happened. But they left a scar on their minds forever. Women don’t report cases of eve-teasing, usually because either the offender is a stranger or just their social reputation.

The Indian Penal Code although doesn’t have specific laws for eve-teasing but other legislations cover its scope. It penalizes acts such as singing obscene songs in public, assaulting a woman with the intent to outrage her modesty, and invading a woman’s privacy.

A few helpline numbers for complaints against eve-teasing in India.