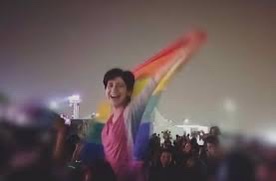 There is a general conception that the Middle East is generally not accepting of non-heteronormative identities. However, this cannot be further from the truth. What can be generally accepted is that there is a difference between pre-colonial and post-colonial attitudes towards homosexuality in the region. When referring to the Middle East this article will use the definition of MENA (Middle East/North Africa).

Of the twenty-two countries regarded as comprising MENA, all were formerly mandates or colonies. Currently, seventeen of these countries outlaw homosexuality or ‘unnatural sexual relations’. These laws originate from former colonial powers’ penal codes and have not changed since. There is much evidence that indicates an open attitude towards homosexuality in the Middle East, pre-colonisation.

The works of poets such as Abu Nawas detail homo-erotic relationships between men and while sodomy was deemed a major sin in Islamic courts of law, ‘acts such as passionate kissing, fondling or lesbian sex were not’. Sexual acts between men and pre-pubescent boys were perceived as an accepted practice in upper-class circles and for men were even seen as a means of affirming their masculinity as long as they played an ‘insertive’ role in the act.

Today, the majority of the Middle East have laws that criminalises homosexuality or “unnatural sex”. However, the legal terms to do so are often unclear with the use of phrases such as ‘sexual intercourse contrary to the order of nature’ or the prohibition of ‘debauchery’. These laws are remnants of their respective country’s colonial past. Imperialists imposed laws, not with the intention of understanding regions but controlling them and assimilating them as a part of their ‘civilising mission’.

Legally this was implemented through Section 377 of British imperial law. The current repression of homosexuality in the region can be attributed to a number of other causes too. Middle Eastern societies are to an extent still trapped by Western colonial structures, especially legal ones. There also exists a culture of resisting Western ‘corruption’. This is contrary to the popular belief that religious doctrine, especially that of Islam plays a role in the creation of anti-queer attitudes. Homophobic rhetoric is utilised as a form of cultural identification against Western ‘corruption’ in Middle Eastern society.

Religious verses from the Koran do exist which condemn sodomy but rather than being the main cause of homophobic attitudes, they have often been used as a tool by political leaders in anti-imperial rhetoric. The latter half of the 20th century saw the rise of Islamic fundamentalism collide with gay rights movements and the subsequent decriminalisation and acceptance of LGBTQ identities in the West. Thus, the rejection of homosexuality occurs more on it being a part of the threat of Western modernisation and corruption.

The West played a major role in indoctrinating the Middle East into adopting legal and societal stances that rejected the existence of homosexuality. Given this legacy, the fight for the recognition of LGBTQ identities in the region has been met with immense rejection and slow progress. Opposing homosexuality has become a means of affirming cultural integrity and given the harsh punishment that can be inflicted on individuals for merely showing ‘signs’ of homosexuality, a culture of silence has been formed around the discussion of these issues.

Even pre-colonisation, discussions of sex and sexuality were taboo topics, meant to be confined to the private sphere rather than the public. In light of that, the Western mission advocating for the acceptance of homosexuality has caused LGBTQ identities to exist in a state of translation. They are not authenticated ones, determined by culture but rather universalised and more often, Westernised. The use of labels such as ‘gay’ or ‘lesbian’ are in themselves colonial imports and Arabs who choose to adopt these identities ultimately conform to Western perceptions of sexuality one way or the other.

While there exists a growing field of Queer Studies in the Middle East, it has found itself falling under the influence of the global LGBT movement, one that holds Westernised influences within it and finds its roots in countries that were previously colonial powers. This is contradictory to what a regional Middle-Eastern approach would achieve and in the process of decolonisation it is vital that knowledge production prioritises putting indigenous perspectives at the forefront of academic practice. Despite growing research on non-heteronormative identities on the Middle East, the field remains severely understudied and is often overshadowed by the field of women's studies.

Legal ramifications have contributed to the culture of silence built around the topic due to the extreme punishments individuals face for even associating with homosexuality, which makes them afraid to speak out and thus not allowing historians to build a comprehensive record of queer identities in the Middle East. We can conclude that colonialism has shaped regional perceptions and formations of non- heteronormative identities in the Middle East to a large extent. The current binary of gender in the region translates any deviation from accepted gender norms into homosexuality, leading to the creation of often toxic gender norms and harmful notions about the LGBTQ community.

The suppression of homosexuality has also been aided by (sometimes toxic) perceptions of masculinity that especially view gay men as a threat to patrilinear familial structures and thus attempt to suppress them. This indicates that in the case of the Middle East it is especially important that the study of sexuality go hand in hand with studies of gender. Ultimately, the notion of homosexuality being a Western import is extremely reductive in ignoring the Middle East’s normalised attitude regarding homosexuality pre-colonisation and denies LGBTQ individuals from the Middle East in modern times the agency to develop their identities in a cultural context.