The Personable, Clever, and Beautiful Warrior of India 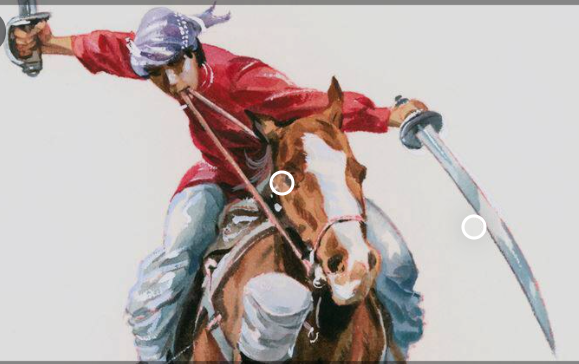 Among all the bravest warriors against the Britishers, Jhansi Rani Lakshmi Bai has a strong place as an iron lady. She was mentioned as the bravest lady, even by the enemies.

Jhansi Rani was born on November 19, 1828, in Uttar Pradesh into a Marathi Brahmin family. Jhansi Rani’s real name was "Manikarnika." She was nicknamed "Manu" by her mother. She lost her mother at the age of 4, and was brought up by her father.

As a child, Manikarnika did not choose to play with kids around her neighbourhood. She stood out from the other kids. Since she was too smart and active, she trained in shooting, horse riding, and fencing, even at a young age.

She had the practise of going to the kingdom court since her father was working there. She trained herself as a warrior with her cousin Nana Sahib and Tatya Tope. They were her childhood friends.

This friendship had a belief that "It is better to die than to live as a slave to the British." These three were mentioned in history as brave warriors against Britishers. They both taught Manu everything they had been trained in.

At the age of 7, while she was riding a horse with her cousin Nana, to their surprise, the horse suddenly jerked and became furious. At that very moment, Manu pushed Nana from the horse and held the colt tightly to keep the horse from hurting her cousin. She also made the horse calm with her strength. As an elder brother, Nana stood in astonishment because her bravery was like a wonder. It was not trained or taught; it was within her from birth.

A humble and homely warrior:

According to their custom, Manu was married to a middle-aged king of Jhansi named Maharaja Gangadhar Rao in 1842, at the age of 14.

She was kind and friendly to the Jhansi people. Instead of seeing her as a queen, the Jhansi people treated her as a goddess. Because she was humble and kind, even to the least of the people. She was renamed as Rani Lakshmi Bai in honour of the Hindu goddess Lakshmi.

Later, she gave birth to a son. But as a misery, the baby boy dies within 4 months. But by the king’s family’s verdict, they planned to adopt a baby. Then they adopted a son from the king’s family named Anand Rao and renamed him, Damodar Rao. He was a healing and a relief for Rani Lakshmi Bai. Since he was her only son, Lakshmi Bai poured her whole love on him and raised him with lots of love.

She also had three other children named Sarangi, Pavan, and Baadal. These were her horses. She took care of it like her own children. She spent most of her time with these three horses in the forest.

Suddenly, Maharaja Gangadhar Rao dies of the disease. So, Anand Rao was selected as the king to reign. But the British scam has been revealed here. They had a rule which stated that "a king’s family should not adopt a child; even if they adopt, they are not allowed to reign as a king." The kingdom would be taken over by the Britishers. "

But Rani insisted that she would not give up the Jhansi. In March 1854, Rani Lakshmi Bai was agreed an annual pension of Rs. 60,000 and ordered to leave the fort. She asked the British government to provide a larger security force for her, and it was allotted to her.

As a celebration of this, she gathered all the Jhansi people and asked them to take heart and not to panic against the Britishers. She stressed and underlined to the people that they have her to rely on as a strength.

Britishers started invading one by one, and they also marched towards Jhansi to capture it. But Rani gathered the warriors inside the fort and gave a warrior oracle. She encouraged and urged them to go to war against the British army forcefully and bravely. She has also encouraged the women of Jhansi to get trained for war. The whole nation stood for Jhansi and for Rani Lakshmi Bai.

The commander of the British sent a message to Jhansi, asking them to surrender. But Rani Lakshmi Bai declined and returned with them with a message that Jhansi is ready to war against the British, they were ready to die in war. There was no second thought of surrendering.

This made the British army rage against Jhansi. With the help of Tatya Tope, Jhansi fought against the Britishers. Since the Britishers had updated equipment like bombs and guns, they moved ahead and started invading Jhansi. They also tried to capture Rani Lakshmi Bai, but she escaped and joined with other warriors like Navab Singh, Tatya Tope, Rao Sahib, Etc.

In 1858, the British army captured Jhansi. The Valiyanai King went in search of the Britishers and surrendered to them. But the other combined kingdoms left Valiyanai and joined the Jhansi army. They camped and trained at Kalpi.

This time, Rani Lakshmi Bai herself was ready to fight in the war against the Britishers. Like every man, she also wore a breastplate and reformed like a man. During the time of war, she also tied her son to her back.

She understood that they also needed tricks to overcome the Britishers. So, she planned to hide and attack like a gorilla in warfare. It is a way of hiding and attacking enemies.

When the Britishers started attacking the camps of Rani Lakshmi Bai, she awoke like a brave warrior. She rode the horse by holding the colts with her teeth and using her two swords, swung upon the enemies in her way.

She was suddenly hit by another sword, which was aimed at someone else and had hit her back. This made her slow down. At that moment, the British army inserted her bullets into her body.

With that bleeding body, she left to another place called Bailiwick and stopped inside the temple. She asked her warriors to take her son with them, so they took him and left at once.

At that moment, with a gentle whisper, she asked the hermit to burn her so that the Britishers could not even take her ashes with them. And the great Queen of India, Rani Lakshmi Bai, ended her life. They were her last words.

Hugh Rose mentioned in his writing that Rani Lakshmi Bai is "personable, clever and beautiful" and she is "the most dangerous of all Indian leaders".

Whatsoever her doings in British eyes may have been, her countrymen will forever remember that she was compelled by ill-treatment into rebellion, and that she lived and died for her country, we cannot forget her involvement for India.

Status of Children and Schooling after COVID-19

Pollution: Breathing in the fresh air becoming a dream in Delhi

New variant of SARS-CoV-2 : How much scary it is?