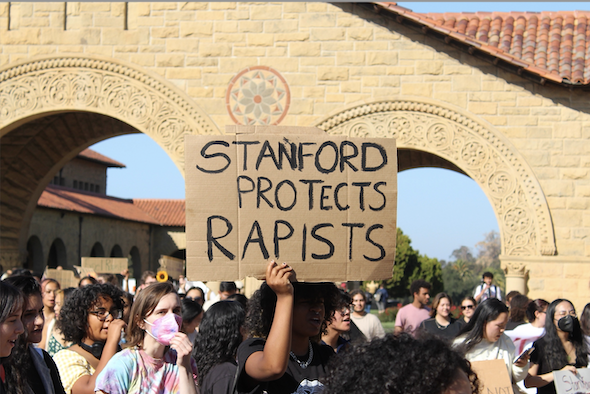 “You don’t even know me, but you’ve been inside me.” This sentence was the opening of Chanel Miller’s victim impact statement. On January 18, 2015, Brock Allen Turner, a student-athlete at Stanford, sexually assaulted Chanel Miller on the Stanford University Campus.

Turner was arrested and released the same day after posting $150,000 bail. Miller’s victim impact statement was posted on the Internet and raised a large amount of public attention. As a victim, Miller went through a four year long legal process in which she kept being asked trivial and personal questions that Turner’s lawyer used to lure her into self-contradiction and debase her personality. Her pain and experience resonate with a lot of the female audienceそ.

Even though all cases might not get nationwide attention,sexual harassment on the campuses of U.S. universities is a prevailing problem. In a campus survey from the 2019 Association of American Universities (AAU), 23.8% of Stanford University undergraduate women responded yes when asked whether they’ve experienced sexual harassment (2019). The astonishing truth of how frequently it has happened around us incurs both sadness and anger.

However, when Stanford University released its official sexual harassment annual report, only 279 cases were documented (Stanford University, 2020). The huge deviation between the survey data and the actual report rate suggests a large percentage of victims that have under-reported or discouraged from reporting.

The school’s tendency towards a silent approach was primarily related to the new Title IX regulations recently released by the U.S. Department of Education (Title IX, 2020). The regulations decrease the possibility of reported cases by narrowing down the definition of sexual harassment while the actual crimes aren’t being addressed.

They are raising the standard of the report when very few cases of sexual harassment can rise to that level of extremity, disallowing victims to satisfy their legal needs. The victims were told that if they haven't experienced harassment that is not rape, that is not very severe, and have no reason to report, the school can do little to help them.

Under the new rules, schools would be required to hold live hearings. They would no longer rely on the so-called single-investigator model that has become common at colleges. Accusers and students accused of sexual assault must be allowed to cross-examine each other through an adviser or lawyer.

It is historically demonstrated that cross-examination will discourage the victims from reporting. Currently, Stanford University uses a hearing model for its Student Title IX Process, which applies when the alleged perpetrator is a student.

The University abandoned its use of cross-examinations during an overhaul of its Title IX rules in 2013. Before the abandonment of cross-examination between 1997 and 2010, Stanford University reported 175 rapes under the Clery Act. Only four students could continue carrying their accusation to a hearing; among them, only two findings of responsibility were made (Dauber, 2020). It’s clear that the process of cross-examination is extremely intimidating for the victims. They were brought back to the traumatizing scenario when they were assaulted while burdened with extensive pressure from the public.

Sexual harassment is cold judicial rule and a gives victims -lasting pain and devastation. Victims have a high possibility of suffering from several mental and physical diseases. In addition, they were receiving pressure from different parts of society, which came together, shaping a toxic ideology of victim-blaming.

It’s more than possible and easy to stand at the viewpoint of an objective legislator, who can observe how sexual harassment incidents in a macro way, but it’s also essential for us not to forget how the victims were impacted. impact brought to the victims. The top three reasons women ages 18-24 do not report sexual harassment include believing it was a personal matter, fear of reprisal, and feeling it was not important enough to report. Their mental state can be summarized into shame, humiliation, and self-blame (Martin 1999).

Sexual assault may affect students’ academic achievement as well as their capacity to contribute to the campus community. College students who have survived sexual assault rarely perform at their prior academic levels and are sometimes even unable to carry an average course load due to psychological depression (AAUP, 2012).

While Stanford University was supposed to put the issue on the table, add security guards to prevent sexual assault from happening, and take a firm stance to alter the ideology around the campus, they needed to do more to change the current circumstances.

In the case of Chanel Miller, Stanford University showed inadequate facilities in crime prevention and lacked proper judgment for the criminal. There was concern that the criminal is an outstanding athlete whose future should not be stained by this ‘small mistake’, while Miller’s narration brought us out of the male’s perspective.

Although Stanford University has revised the old SHPO page to use seemingly more politically correct phrases, they should spend more on the security of the campus, ensuring the genuine report of the crime, and paying more attention to the victims afterward. The school’s incapability is one of the biggest causes of the high crime rate at Stanford, and if the problem is not fixed, there will only be more and more Chanel Millers——only their names will not be noticed.