The Reservation System In India: The Good, The Bad, And The In-Between 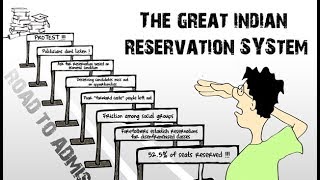 We have all been in Catch-22 situations, where we had to make difficult choices, make decisions when nothing is feasible. Situations where the mind automatically asks itself the oft-quoted rhetorical question: What will you choose - the Devil or the Deep Blue Sea? To reflect upon the reservation system in India is tantamount to putting oneself in a Catch-22 situation. There is no right answer to the questions, there is no single way of approaching the system.

Firstly, it is imperative to form an understanding of the historical and political basis for the reservation system in India. Initially, caste-based reservations were introduced with the sole aim of facilitating the political empowerment of the weaker and marginalized castes in the society. The 1932 Poona Pact, an agreement between Dr. B.R. Ambedkar and Mahatma Gandhi, under which a certain number of seats in the electorate were to be reserved for the members of the marginalized castes and classes, can be singled out as the most defining moment that led to the formation of the reservation system (Source: ‘Ambedkar and the Poona Pact', The Hindu, 14th April, 2020). The reservations were aimed at creating opportunities for the SCs and STs, through the utilization of which they could work towards the collective betterment of their communities. The next event that has been instrumental in shaping the reservation system as we know it, was the Mandal Commission Report of 1991. In the report, the commission made an important observation: nearly 52% of India’s population belonged to the Other Backward Classes (OBCs). As a result, the commission proposed reserving 27% of government jobs for them, in addition to the reservations that were already in place for the SC and ST communities. When taken together, nearly 50% of India’s population is a beneficiary of the reservation system. Many constitutional amendments have been made in this regard, with a 2019 amendment introducing an additional 10% reservation for the economically backward classes. As of today, the reservation system applies to several educational institutions, government jobs, national-level exams and legislatures.

We must understand the real intent behind the introduction of the reservation system in the first place: it was intended to protect the marginalized classes from complete domination and discrimination by the upper classes. The educational empowerment of these classes, along with the provision of a political voice has gone a long way in improving their situation in the country. While the reservation system might have achieved its purpose, the burning question still remains: Do we still need it? It’s 2021, and it is time to re-examine many aspects of the reservation system.

It cannot be denied that the system of reservation has its advantages, as we have seen over the years. The system has paved the way for the SC/ST/OBC community to secure adequate representation, especially at the political level. This has only served to broaden the diversity of voices in politics, and in a democracy, diversity is a good thing. Further, many meritorious students belonging to the weaker classes have benefited greatly from the reservation system in the educational institutions, and many have utilized the opportunity to become successful, and have worked towards the betterment of their community. We can also say that the reservation system, through empowering a single individual, has empowered many families and provided them with financial security. The fact that the current President of India, Shri Ram Nath Kovind belongs to the Kori community of the Dalits, speaks volumes about how the members of the backward classes are defeating the oppressive forces, and despite all odds, are making a name for themselves.

But the reservation system also has many problems, and it has caused many disadvantages. The reservations in educational systems across India have perhaps caused the most damage. For instance, most admissions to higher-education institutes are done on the basis of entrance examinations, where the cut-offs for those belonging to the SC/ST/OBC communities are lower than for those from the Forward Caste (FC). The first cut-off list for the BA (Hons) in English at St. Stephen’s College, University of Delhi, required a student of General category to have obtained 98.75% in their school-leaving examinations, against the 93.75% needed for a student of the SC/ST community. This situation gets worse at the level of the nation-wide entrance exams. The NEET cut off in 2019 for the general category was at 50 percentile of the total marks, as opposed to the 40 percentile required for those belonging to the SC/ST/OBC communities. This led to situations where students who had scored higher marks than their counterparts from the reserved communities, were ranked lower than them, due to the reservation system, severely impacting their college choice. This scenario can be extended to apply to other exams as well, like UPSC and IIT-JEE. The competition amongst Indian students taking up entrance exams is notoriously high; reservations only make an already difficult task even more arduous. While reservations were meant to alleviate discrimination, they are beginning to create a new system of discrimination of the reverse order, where the upper classes are at a disadvantage. Even the reservation quotas in government jobs are becoming a problem, as many deserving candidates are being turned down.

Whether it is a college admission, job position, or a legislature candidacy, the person who is capable and deserving should be given the opportunity. And, a person’s ability is in no way determined by their caste or economic background. Nowadays, the SC/ST/OBC communities are no longer confined to caste-based professions. They have made a mark in all fields, and many of them are financially stable. Most students are brilliant enough to not need any reservation. In a way, the reservation system creates a two-way discrimination: while it makes things harder for the General Category people, it also implicitly states that the persons belonging to SC/ST/OBC still need to be uplifted, disregarding the years of progress and advancement made by them.

In conclusion, I would like to make three points: First, we, as a society, must shift our focus from ensuring equality to ensuring equity, where we recognize the different circumstances of every community, and work accordingly to provide them with resources. For instance, a wealthy individual from an economically-backward community does not need the 10% reservation, while there are economically-disadvantaged groups from the General Category who will genuinely benefit from it. Second, the very term ‘backward class’ is problematic. Who decides which class is ‘backward’ and which class is ‘forward’? We must understand that an individual is not defined by his/her community, and every community has its own richness that needs to be celebrated. This labelling needs to end. Third, discrimination cannot be ended through reservations. Discrimination can only be eliminated by a change in individual and communal mindsets. We need to adopt a more bio-diverse and holistic approach towards each other, and we must be accepting of our differences. That’s the sensible way forward.

Reservation on the basis of caste, religion and gender might have been beneficial, but changing times require changing outlooks, and it is essential that we change according to the situations.

An Insight into India's Education System