The Universal Algebra: What Does It Mean To Be Religious Minorities? 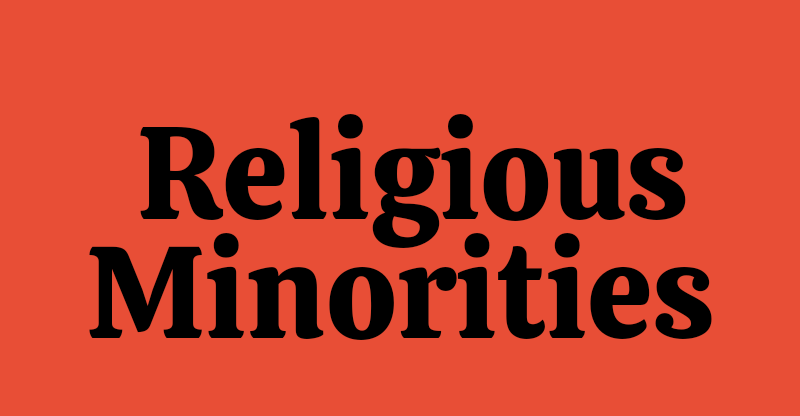 With the widespread migration of communities across the world, many countries of today are significantly of a heterogeneous constitution.  This heterogeneity is reflected by the various communities through the languages they speak, the traditions they follow and the cultures they subscribe to. Religion and religious faith also contributes to the heterogeneous and diverse fabric that makes up a country. However, in many countries, a totalitarian principle of religion is followed, which renders the minority religious communities vulnerable and at the risk of persecution. The International Religious Freedom Report, released every year by the 'United Nations Commission on International Religious Freedom' (USCIRF), classifies countries with a record of religious violations as CPCs or Countries of Particular Concern.  The 2021 report listed Burma, China, Eritrea, India, Iran, Nigeria, North Korea, Pakistan, Russia, Saudi Arabia, Syria, Tajikistan, Turkmenistan and Vietnam as CPCs, while further listing another twelve countries, including the likes of Egypt, Afghanistan and Iraq, under the category of 'Special Watch List Countries'.

The condition of religious minorities in predominantly Islamic countries has become a particular cause of concern over the past few years. For instance, in Saudi Arabia, there prevails an overt and open practise of religious totalitarianism. Saudi Arabia ardently follows Wahhabism, a form of Islam "centered upon the literal interpretation of the Quran". In Saudi Arabia, the adherents of minority religions are forbidden from public worship, and are required to refrain from proselytizing. Even the law does not guarantee the freedom of religion, according to a 2019 Report on International Religious Freedom by the U.S. Department of State. Further, the report states that the country's Justice system derives its basis from the Quran". In order to attain citizenship, it is mandatory for non-Muslims to convert to Islam. The Shia Muslims are minorities in the country, and they have often been the targets of multiple human rights violations, including illegal imprisonment and executions. The national figures estimate that the Shia population constitute around 15% of the total population, but, it is believed that the actual estimate is around 25%.

In Iran, a situation rather opposite to the one in Saudi Arabia prevails. The country identifies itself as an Islamic Republic that follows the 'Twelver Ja'afri Shia Islam' as the state religion. Here, the Sunni Muslim community are a part of the minority. Apart from Islam, Iran's constitution recognizes the Zoroastrians, Jews and Christians as religious minorities, and "permits them the worship and formation of religious societies". However, Iran has a record of harassing and discriminating against the non- Shia Muslims and members of the Baha'i community. The latter community has been subjected to trials, interrogations, job dismissals, and are forbidden from accessing higher education. Even their marriages are not recognized by the government. A Forbes report stated that under President Hassan Rouhani, since 2013, "the government of Iran continues to engage in systematic, ongoing and egregious violence against religious minorities, with those at particular risk being the atheists, Christians, Baha'is, Sunnis and the Jews". In particular, the Jewish community in Iran has witnessed a gradual decline, with the current population of the community estimated to be at 25,000, down from 80,000 in 1979. Even the Zoroastrian community has witnessed a drop in numbers, with the initial population of 3,00,000 in the 1970s dwindling to about 20,000.

In Iraq, the population is a blend of both the Sunni and the Shia Muslims. While it is reported that the authorities of the country generally provide for religious freedom, the condition of the religious minorities has worsened since the advent of ISIS and ISIL. Like Iran, the practise of the Baha'i faith is actively prohibited in Iraq. According to a UNHCR report in May 2019, "religious minorities have faced waves of displacement due to conflict and political and religious persecution". Further, the 2018 USSD report on religious freedom listed the community-specific discrimination faced by  religious minorities in Iraq. The Christians were particularly persecuted under the ISIL regime, and were subjected to "kidnapping, killing, rape, enslavement, forced marriage and sexual violence". They also face intimidation. The members of the Yezidi community have had it worse, as the ISIL in Iraq has labeled them as 'heretics'. Many Yezidi men have been killed in captivity, while many women of the community have been sexually enslaved. As a result, a widespread displacement of the Yezidis has occurred. Apart from the Christians, Baha'is and the Yezidis, the Sabean-Mandeans, Kaka'is and the Jews are also extremely vulnerable. According to a report by Minority Rights Group International, "the Christian population which before 2003 numbered as many as 1.4 million, had dwindled to 3,50,000 by early 2014". Further, it is believed that the 2005 population of the Yezidis, which was at 7,00,000, had "reportedly fallen to approximately 5,00,000 in 2014".

Bangladesh, despite designating Islam as the state religion, "upholds the principle of Secularism". The state recognises the Hindus, Buddhists and the Christians as the major minority religion groups, and provides its citizens with the right to "profess, practice and propagate all religions". While the religious minorities have reported property and land disputes, these incidents have also been in decline. The Bangladesh government also provides religious sites, festivals and processions with protection, so as to prevent violence. According to the President of Bangladesh, Abdul Hamid, the country endeavors to understand and promote the importance of religious freedom and tolerance.

In Pakistan, religious discrimination has been a serious issue. Hindus, Sikhs, Christians, Shias and Ahmadis comprise the religious minorities in the country. The 2010 Lahore attacks targeted the Ahmaddiya Mosques. Between 2005 and 2013, many Churches and Christian Schools were set on fire. According to an estimate, Pakistan had the "highest number of documented Church attacks in the world". Hindus and Sikhs have also been targeted very often, an act that has been predominantly since the 1947 Partition. The Pakistan Hindu Council has estimated that "nearly 5000 Hindus migrate to India from Pakistan to escape religious persecution". Pakistan's Blasphemy Law, in particular, has been very biased towards the religious minorities.

In Maldives, the citizens are required to be Muslim, and "public office holders, including the President, need to be the followers of Sunni Islam". Further, "the propagation of any religion other than Islam is a criminal offense". In the country, there are no reliable estimates of actual religious affiliations of non-Muslim groups. Although there is the presence of the Indian diaspora in Maldives, none of them are 'officially recognized ' as Hindus.

Apart from the countries mentioned above, in predominantly Islamic countries like Sudan, Afghanistan, Palestine, Somalia, Libya and Kosovo, the status of religious minorities continue to be rather deplorable.

In India, the steady rise of Hindutva and the implementation of CAA and NRC, heralds the gradual decline of religious freedom in the country, with religious minorities facing greater discrimination than before. Worsening the situation are the incidents of Left Wing and Right Wing Extremism. Many Human Rights groups have found North Korea and its government to be responsible for a systematic denial of the "rights to freedom, thought, conscience and religion" to its people.

In conclusion, we need to understand that discrimination on the basis of religion, ethnicity, race and gender is entirely unethical. We are all equally human, we are all equally capable of feeling joy and sorrow, and we are all equally gifted. We cannot deem other individuals and communities unworthy of respect and consideration, on the basis of their beliefs. The Covid-19 pandemic had proved that we are all vulnerable, our myriad differences notwithstanding. We need to foster an existence based on acceptance, tolerance and compassion, without which this ravaged world can never be rebuilt.

We need to respect every religious faith as a sacred expression of devotion, as a beautiful way of giving thanks. As Muhammad Ali once said: "Rivers, ponds, lakes and streams- they all have different names, but they all contain water. Just as religions do- they all contain truths".