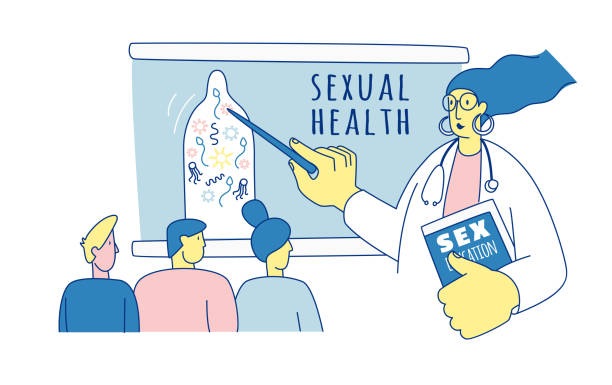 The recent release of season 3 of Netflix’s most popular and anticipated show, Sex Education, has flooded the internet with talks and memes. While many of us might want an Otis or Maeve, it’s really important to acknowledge the necessity of a Dr. Jean in our lives. How many times have you heard the word “sex” in your households or your schools? How many times have you used the word “sex” openly in your household, schools, or for that matter, even in public without feeling the need to whisper it? Keeping in mind that while India is no Hogwarts, the word “sex” is almost like the Voldemort of India, always whispered and hinted at as “you-know-what” terms in conversations.

It’s no news that sex is still a taboo in India. If we ask around, I can say with utmost surety that almost every friend of ours has a funny story told to them by their parents about how they were born. Don’t believe me? Well, there’s one topic for a fun conversation. I, for one, was told that I was sent by God in a flood as a source of happiness for my family. I was born in heavy rains, but this was too much of a bluff for me to accept even as a kid.

A friend of mine was told that his mother “ate a seed which eventually grew into him”. This was still half-true but half-truths are just as bad as lies.

Another friend of mine was scolded as a child after she asked, “Where do babies come from?” Our parents would rather us believe in “baby making seeds” than tell us about the natural process of reproduction.

Normalizing talks around sex to children at a very young age is the foremost step to build a healthy mindset about sex. Parents and teachers should be concerned about the sex education of their children from a very young age.

It’s important to understand that sex education does far more than just preventing the spread of sexually transmitted diseases. Telling your kids that sex is dangerous because they’ll get herpes or because “God hates the kids who have sex before marriage” does not count as sex education.

This has only ever lead to unsafe sex and more teenage pregnancies.

Sex education is supposed to provide a deeper understanding of safe sex, intimacy, physical and emotional well-being in terms of one’s sexuality, and most importantly, to teach the value of consent. It should provide a safe space for young kids as well as adults to talk freely about sex without there being an overcasting cloud of shame on their heads.

It is through these conversations that one gets more familiar with their sexual identity. A lot of schools that do take the initiative of starting a conversation about sex education often make the mistake of going by the “one glove fits all” rule. Sexuality is a spectrum. For children to have self-confidence about their sexuality, social institutions must take the initiative of teaching kids about the vast possibilities of one’s sexuality. This will prevent bullying because children will learn how to provide a comfortable space where one can accept one’s sexuality. If this information comes from reliable sources, children are less prone to fall for misleading information that they might fall upon otherwise.

There have been several cases where a child has come forward with information about child abuse because they were taught about “good touch” and “bad touch” at school. Consent is the first step for building relationships. Both young girls and young boys should be taught about consent and boundaries. Let children know that they are in charge of their bodies and they are nowhere obliged to participate in any physical activity if it makes them feel uncomfortable. Teach them how to say “NO”. A “yes” that’s said negatively or not candidly is not a yes. It is important to keep in mind that sexual manipulation to divert the answer from “No” or repeatedly asking the same question to hear a “yes” also comes under violation of consent. Teaching consent at a young age can not only prevent them from being sexually abused but also will save them from the years of trauma that will come after that.

In India, there’s a lot of emphasis on teenage pregnancies and not enough on the practice of safe sex. If the latter is focused upon properly, there will automatically be fewer chances of teenage pregnancies. Likewise, the topic of periods is discussed between and taught only to girls. I remember my co-ed school doing a presentation for period awareness in the auditorium. No boy was assembled for that session. Before going back to the classes, we were told not to talk about periods to any boy. And on going back what were we supposed to tell them? That it's a “girl thing”. Wonder why we don’t find enough compassion and empathy in grown men?

Menstruation is a normal part of being a woman. But sadly the society we live in has somehow specialized itself in creating stigmas around the most natural things in the world. This can only change if society members are willing to learn, making awareness their primary goal. There’s a prevailing lack of empathy in boys and men about periods. We are accused of “exaggerating” the pain or making up the mood swings. This lack of empathy stems from their initial lack of knowledge about female anatomy.

Teach your sons about the physical and emotional experience of periods. They should know that periods are not “gross” or something women should be embarrassed or ashamed about. It’s a natural process that prepares a female body for childbirth, which in itself is a big deal.

Taboos affect society negatively. The damage done by taboos is inward. They weaken the society internally which eventually leads to external destruction as well. It is important to eradicate them. The first step to break a taboo is to start a conversation about it. And it is through conversations that we can normalize talks about sexual health and well-being. Normalizing talking and learning about sex will help society to make better choices when it comes to sex and sexuality. This will not only help us understand ourselves better but it will also help us create a generation that is more efficient in communicating with their kids. So the next time your child asks you, “Where do babies come from?”, you answer honestly instead of telling them they were bought on Amazon.

Actually you spotted the main points very accurately. This article is really must read for all indians https://bloggingtogenerations.blogspot.com