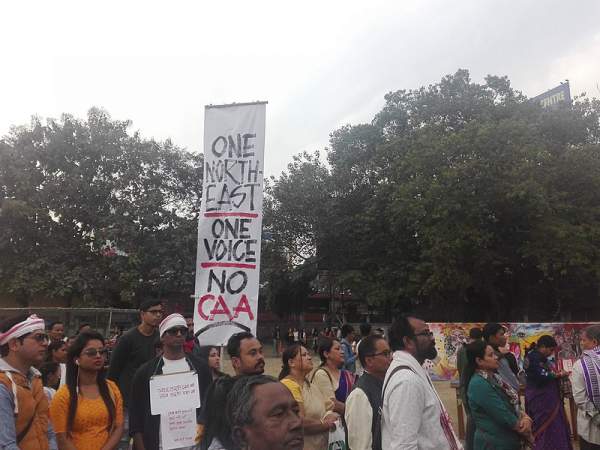 The North-East Indian state of Assam has had a tenuous history due to immigration. Civil agitation and separatist militancy went rampant throughout the 20th century. Numerous cases of human rights violation carried on by the military and the militants alike have been documented over the years. But in the last decade or so, things seem to have calmed down as civil discourse on the matter gained traction and the Central Govt. showed more willingness to resolve the crisis. This coincided with the slow demise of the separatist militants. But the effects of that chapter can still be felt today as was evident in the Citizenship Amendment Bill protest of late 2019.

The chaos that ensued in Assam's past is an assertion of ethnic identity against a non-stop influx of foreign immigrants from Bangladesh. Public intellectual, Udayon Misra states that the idea of a unified Assamese identity can be traced back to the 16th century when various tribes banded together under the banner of the Ahom king against a Bengali invasion (then a part of the Mughal Empire). It was around this time that Ahom kings adopted Hinduism. The Hindu population in Assam was made up of caste Hindus who migrated from other parts of India and a newly converted native tribal population. The Assamese identity was further asserted in the 20th Century with an influx of East Bengali immigrants and refugees.

Census figures from 1901 show that Assam plains had a population density of 109 people per sq. km. While the hills had an even lower population density. As a result, the colonial government saw Assam as a land frontier for the overpopulated Bengal Province which had a population density of 767 people per sq. km. Due to the initiatives taken by the British, the immigrant population quickly displaced the indigenous population. The non-native population includes Bengali, Nepali, Marwari and Adivasi Santhal people who were incentivised to come and work there. By the 1920s, the situation had become so dire that the British Govt. was forced to act in order to restrict the inflow of immigrants due to the demographic shift. The line system was thus formalised, initially put in place to prohibit the reckless expansion of British entrepreneurs which threatened relations with the hill-tribes. But eventually, it became a means to segregate the immigrant population from the indigenous one.

Professor Sanjib Baruah identifies Assamese-hood as a form of sub-nationalism in contrast to Pan Indian nationalism. This identity is not limited to ethnicity but through the common usage of the Assamese language. For example, a large section of the Assamese Muslims in Brahmaputra Valley are originally of East Bengali descent who later adopted the Assamese language as their own and is thus identified as Assamese both culturally and in the census. This group is recognised as a part of the greater Assamese identity and is not to be confused with immigrants. Conversely, many tribals such as Bodo's do not identify themselves as Assamese since they regard themself as the original autochthon of the land. They have their language, history, culture and religion.

The historical condition has fuelled the fear amongst the Assamese people that they could become the minority in their own backyard if the infiltration of immigrants is left unchecked. A similar instance materialised in the neighbouring state of Tripura. Here the indigenous Tripuri population was slowly replaced by a large immigrant population from erstwhile East Pakistan (East Bengal in colonial India), now Bangladesh. In Tripura, the Bengalis accounted for nearly 40% of the population at the start of the 20th century.

This was initially due to the late Maharaja Bijoy Manikya's decision to allow Bengali immigrants to settle. There were multiple reasons for this, for starter, the old Twipra kingdom also ruled over many Bengali dominated regions; the Bengali language was to be the lingua franca to bridge communication amongst the tribals; Bengalis also helped organise and maintain a modern administration and provided a large labour pool.

However, as the small hill kingdom became part of India, immigration did not cease. After the separation of East Pakistan from Pakistan and the formation of Bangladesh, Tripura saw a heavy influx of political refugees which were now settled in territories that were earlier reserved for the tribals. “The Congress, outmanoeuvred in the tribal areas, went out of its way to promote refugee settlements even in areas marked as Tribal Reserve by the late King,” according to an assam.org report. The demography quickly shifted in favour of the East Bengali refugees, and in a democratic system with no king, the tribal people quickly felt marginalised in their land and lost any semblance of political power. This acted as a catalyst for the formation of militant groups. Naturally, the ordeal faced by the Tripuri people served as an example to the Assamese people as well. The fear of becoming a minority in their backyard is thus ingrained, and as such, they are vehemently opposed to what they see as a form of settler colonialism.

Between 1979 and 1985, an immense political struggle took place called the Assam Movement against enfranchising foreigners. The leaders of the movement argued that people from East Bengal and Nepal, unless they were officially given Indian citizenship, were illegal immigrants. They alleged that many foreigners were illegally enfranchised for political gains. The election in December 1979 saw a massive opposition and as a result twelve of the fourteen seats to the Indian Parliament went unfulfilled. The political turmoil led to the Central Govt. taking direct control over the state. Similarly, the 1983 state election too was met with a boycott and violence. In that same year the most gruesome anecdote of ethnic violence in Assam took place, now referred to as the Nellie massacre when roughly 2000 villagers of East Bengali Muslim descent were killed by Hindu tribals with bows, arrows and axes.

By 1985, the Central Govt. agreed to hold talks with the leaders of the movement. This culminated with the signing of the Assam Accord to resolve the issue of immigration. A commitment was made to safeguard the economic, linguistic, cultural and social heritage of the people. The document proposed that the immigrants will be classified into different categories based on when they entered Assam. They were to be disenfranchised temporarily whereas immigrants that entered Assam after 1971 (partition of Pakistan) were to be deported altogether. This exercise was extremely difficult since documents of identification were rare. Furthermore, many refugees made their way to India after the formation of Bangladesh. There is no legal provision for providing citizenship to them, however, an informal obligation towards the refugees of partition was widely accepted according to Sanjib Baruah.

There remains a great deal of ambiguity about the status of these so-called Bangladeshis. The number of foreigners was estimated to be as high as 4.5 to 5 million in 1971, or 31-33% of the total population of the state according to the organisers of the Assam Movement. The supporters of the movement frequently quoted India's Chief Election Officer at the time S. L. Sadhkar's concern about a free and fair election in the state. In 1978, he gave a speech where he outlined that the population has jumped over 34.98% in a decade between 1961-1971, due to immigration. There are numerous other documents produced by the Govt. of India itself, such as a 1963 pamphlet called “Influx” produced by the Ministry of External Affairs, that has been cited by the organisers as an admission of large-scale immigration from East Bengal into Assam, Tripura and West Bengal.

In 2013, the state carried on an exercise to update the National Register of Citizens (NRC) following a Supreme Court order. Nearly 33 million people of Assam had to prove that they were Indian national prior to March 24, 1971. Of which over 1.9 million people did not make it to the list. This is significantly less than the estimation. The Govt. assured that the non-inclusion of a name in data did not amount to being declared a foreigner. Such individuals could plead their case to the foreigner's tribunal and on failing this they could approach the High Court and Supreme Court.

More than three decades after signing the accord, a lot has happened but nothing concrete has materialised out of it except concrete structures like the internment camps that were constructed to host the so-called Bangladeshi aliens. Citizenship in Assam remains vague, and it is unlikely that Bangladesh will ever willingly accept any of them as their own. Innocent lives have been destroyed and their future remains uncertain due to policy failure. Moreover, as long as the borders remain porous, immigration will continue to remain a hot topic. The question of identity and immigration in Assam is far from resolved.